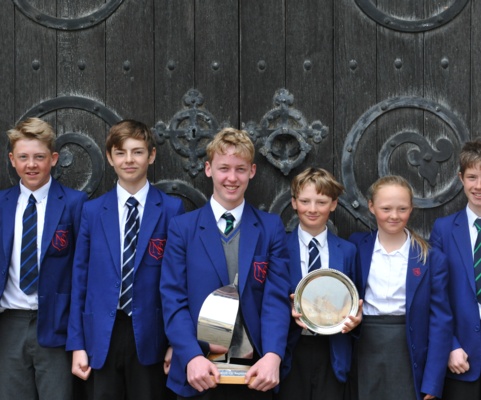 During the first part of half-term, the school’s U16 sailing team took part in the RS Feva National Championships for the first time in its history. The prestigious event, held at Torquay on the south coast of England, involved 110 boats belonging to clubs and schools from around the country.

Norwich School’s sailors performed with consummate skill, courage and determination during the challenging four day event. The wind strength was demanding, as were sea conditions, the competition and the course. However, William Pank (L5P) and his crew Finlay Campbell (M5S) secured 9th place in the Gold Fleet, Seb Gotto (U4P) and his crew Sam Briggs (M5S) secured 6th place in the Silver Fleet and Grace Pank (L4P) and her crew Thomas Alston (U4C) secured 21st. As a result the team won the trophy for being the top placed school at this year’s National Championships, overcoming such heavyweights as Tonbridge School, Oakham School and Rydal School.

The achievement is all the more momentous when taking into account that the average age of the team was almost 2 years below most of their competitors, and the squad can now look forward to the World Championships in the summer.

The team's success was featured in the national Attain Magazine Autumn Edition, which can be seen here.