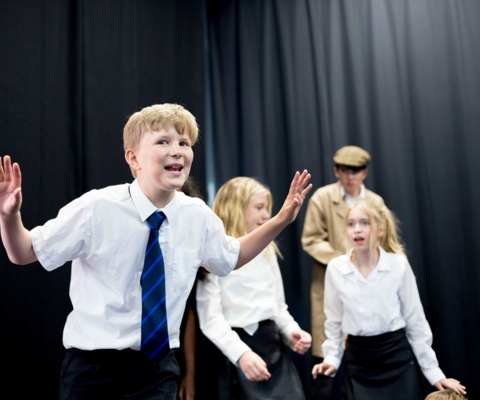 Mr Child to have play showcased at the Ink Festival

Chaplain to the school, Revd Corin Child, has written a play which is going to be performed at the Ink Festival in Suffolk.

The play, The Sound Guy, shows a novice sound technician arriving late to set up an event he knows nothing about. It turns out to be a far-right rally with a notorious speaker. Questions of conscience and free speech follow, but the speaker has all the arguments – until the sound guy reveals one final surprise.

Mr Child said: 'Last year I was in the Forum library and a came across a flyer for the Ink Festival. The request for new writing caught my attention, and when I looked into it further I was impressed by the support and opportunities for new and aspiring writers and actors. Writing is one of the things I like to do with my summer holidays, and I had an idea for a play where a mild-mannered person deals with forceful people and extreme opinions (a topic that’s never far from the news). The short play format felt manageable and allows for punchy, pacey drama with a twist at the end. I used the competition as an incentive to get the piece written. I didn’t really expect it to be chosen for performance – I was delighted when it was!'

The Ink Festival showcases short pieces not previously performed by authors, who have a connection to East Anglia. The festival will take place 12-14th April 2019, at a theatre in Halesworth, Suffolk. Some pieces are then included in a tour of East Anglian venues (including the Garage in Norwich) at the end of April followed by a run at a London theatre in May.

The school drama department have been helping Mr Child by reading his first draft of the play and giving him feedback.