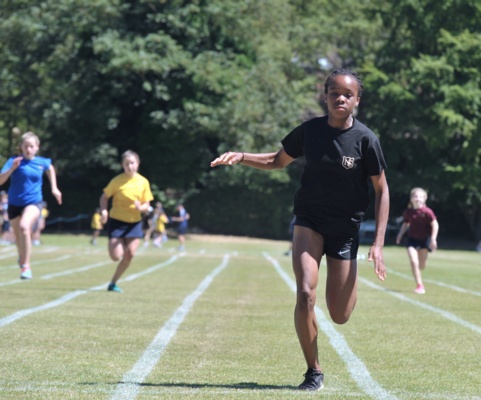 On Thursday 2nd May, Norwich School hosted the City Sports Day at UEA. 8 schools and over 500 pupils took part across the full range of track and field events. This is a competition with a long history, dating back to the 1960’s. This year, 7 records were broken, and 5 of these were by Norwich School pupils.

In year 10 there was a win for Jacob Brown in the long jump, while in year 9 Jared Ikazoboh won both the long and triple jump and Marcus O’Sullivan won the discus. In the year 9 girls, Ann Kalu won the 100m and long jump before making up several places on the final leg to win the relay. In year 8, Daniel Conway and Jacob Gandy won the 800m and shot put, while Madison Kelly won both the 800m and 200m in new record times. In year 7, Billy Francis set a new record in the long jump, while Izzy Mardle added 88cm to the girls' record. Izzy also won the 100m, Ava de Cooper Wride won the 200m, and they teamed up with Mia Sexton and Nat Saunders to set a new record in the relay. The year 7 girls were impressively strong across the board, with everyone finishing in the top 3 in their event. This meant that they won the overall competition in their age-group.

We are thankful to all schools who took part in the event.