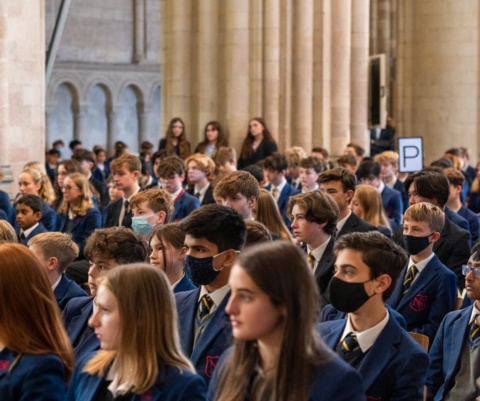 Today's assembly was led by members of the Amnesty Group. You can read their address below:

Amnesty International is a global movement with a membership of over 10 million people who take injustice personally.

Its members campaign for a world where Human Rights are enjoyed by all. The charity has helped to move Human Rights from the fringes to the centre-stage of world affairs.

It aims to abolish the death penalty, to combat discrimination and to defend the rights of refugees and migrants.

The charity investigates and exposes the abuse of Human Rights. It educates and mobilises the public and helps to transform society in order to create a safer, fairer world.

It received the Nobel Peace Prize for its world-wide respect for Human Rights. This award underlines the huge contribution that Amnesty International has made and continues to make.

This year its new strategic direction is one that tackles our climate crisis; with a belief that such a change impacts Human Rights to life, health, food, water and housing – basic amenities, and ones that should be accessible to all.

An example of a case in which Amnesty is involved is that of Nazanin Zaghari-Ratcliffe, who has been unjustly detainment in Iran, for over 2,000 days!

Nazanin is a 42-year-old British Iranian mother who took her daughter to visit her parents for the Iranian New Year in March 2016. She was arrested at the airport as she was about to leave Iran, without an explanation. Her child, who was only one year old at the time, was taken away and they were separated. Nazanin was placed in confinement for eight and half months, until her grossly unfair trial in September 2016. She was sentenced to 5 years in prison on a national security charge, and all evidence was kept secret.

In March last year, her official sentenced ended. During her imprisonment, Nazanin’s mental health declined dramatically, causing distress and depression, after undergoing cruel treatment, separation from her family and limited access to any medical care.

In October 2021, Iran announced that she had been given a second prison sentence and again quashed her appeal. Additionally, she has been banned from travel. Nazanin continues to be used as a bargaining chip at the hands of an authority who are playing a cruel political game with her life.

Amnesty International has taken many steps to try and provide help for Nazanin.

This includes raising the profile of her case at every opportunity, providing support for her family, and calling on the Prime Minister to end the political game. The UK government has taken some steps to seek her release, but these are currently at a standstill. Amnesty International is continuing to lobby on her behalf, and to support her husband, Richard. It was he who went on a courageous hunger strike outside the Foreign Office last November that lasted for a staggering 21 days.

Amnesty International employs a range of methods in order to advocate effectively.

It aims to attract media attention via direct-appeal campaigns.

Effective methods of advocacy have led to many successes over the years.

One of its most recent success stories was in South Africa. A report from Amnesty International, revealed that its education system was characterised by crumbling infrastructure, overcrowded classrooms and relatively poor educational outcomes, which was perpetuating inequality and failing many of its children.

Alarmingly, even today, many children continue to live with the consequences of the political and economic decisions made during the Apartheid era where people were segregated according to their skin colour. South African children’s experience of education still very much depends on where they are born, how wealthy they are, and the colour of their skin.

Given these circumstances, it is not surprising that educational outcomes remain relatively poor. For example, a recent international survey found that more than three quarters of children in South Africa aged nine cannot read.

“The right to quality education includes having a school where learners are safe to learn and have the adequate infrastructure and facilities to do so, but our research has found that this is not the reality for many learners in the country.”

Accordingly, in its recommendations, Amnesty International called for the review and reform of how the education budget was distributed in order to achieve a decent education for all, and to combat entrenched inequality within the system.

Following this, President Ramaphosa announced plans to replace the remaining 150 mud schools and improve the 3,000 schools without adequate sanitation. This will undoubtedly have a significant impact on the lives of many disadvantaged children across the country.

This year the school’s Amnesty Group has organised a number of events including:

A Chinese Dumpling Evening last Friday, when we made Dim Sung for local refugees supported by the charity English Plus.

On Tuesday we delivered home-made cookies to students of English Plus.

There will be a Sri Lankan dance rehearsal in the Blake Studio at lunch time on the 9th of March – please message Shraeya Saravanavel or Alex Illing if you would like to be involved.

To celebrate International Women’s Day, the film Suffragette will be shown in the OMR on Thursday 10th of March.

On Thursday 17th of March, there will be a joint film night with BAME Society, and we will be showing Black Panther in the Blake Studio. The viewing is open to all pupils and teachers.

And last, but by no means least: on Friday 20th of May, we will be holding our annual Amnesty Variety Evening.  We hope to see as many of you as possible at these events!

The music that you will hear at the end of today’s assembly is the thought-provoking rallying cry by KT Tunstall: “I won’t back down”.