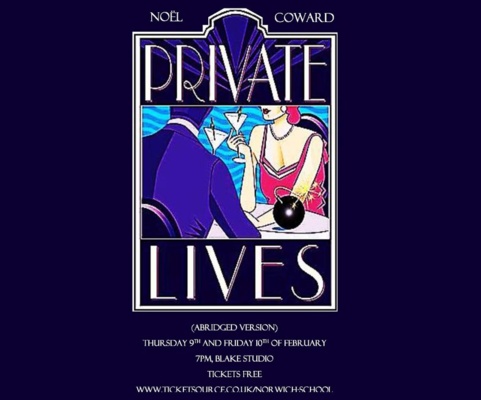 Drama Gap Student Alice Rickett looks ahead to some of the drama performances which are going to be happening over a very busy few weeks for the department this term:

With multiple productions in rehearsal around the school at the moment, moving around the close after school you can easily stumble from 1940s Philadelphia, to 1920s Normandy, to first century Jerusalem. Having finished rehearsals from the Senior Play, The Philadelphia Story, I visited rehearsals for Private Lives last week. This production is particularly exciting as it is the first play to be produced in the new Blake Studio and includes a striking set designed by Peter Beck, who also designed Sweeney Todd. In contrast to The Philadelphia Story's Tracy and Mike, whom I had just left in their first encounter, it is a reunion that is at the heart of Coward's play, and it was this scene that I had the pleasure to watch in rehearsal. While this may be former husband and wife Elliot and Amanda's first sight of each other in 5 years, their undeniable chemistry and fatal attraction fizzes to the surface and they seem to pick up right where they left off, painting an instant picture of a past relationship that is as real to the audience as their respective second marriages. The fact that this reunion occurs on next-door balconies creates the impression of two separate worlds, which the mature performances of Willow Major and Miles Lukoszevieze bridge fantastically.

Come and see the wonderful first act of Private Lives (which also includes Artemis Apergi and Gabriel Young) on Thursday 9th and Friday 10th February, at 7pm in the new Blake Studio. The play is described as 'A stylish, brutal piece of writing with Art Deco glamour, cocktails, wit and passion on the balcony in the South of France'. Tickets are free and available here https://www.ticketsource.co.uk/norwich-school.

The Philadelphia Story will be performed on 2nd, 3rd and 4th March at the Maddermarket Theatre, at 7.30pm, and the Passion Play is being performed in the Cathedral on the 10th and 11th March, also at 7.30pm.