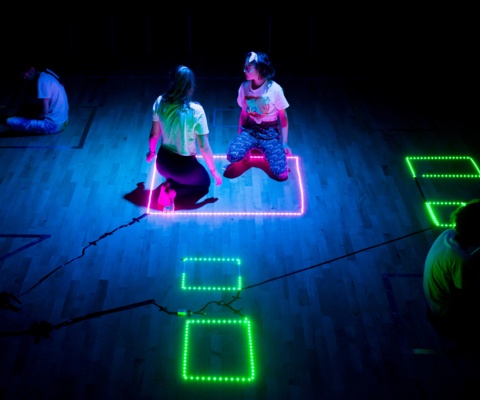 In both curricular and extra-curricular Drama, we offer pupils the most diverse and professional theatre experiences possible.

Our young actors perform in local professional theatres such as The Norwich Playhouse and Epic Studios, where we have produced our annual musicals (We Will Rock You, Sweeney Todd, West Side Story, and Chicago). More recently in our own newly purpose-built Blake Studio theatre, we have presented Oh What a Lovely War, Buckets and Fantastic Mr Fox.

Senior productions at Maddermarket or Norwich Puppet Theatre include The Philadelphia Story, The Cherry Orchard and the German expressionist play Judgement Day. In recent times we produced Hamlet at Epic TV Studios, where we incorporated live mixing and live-stream camera work by Norwich School's Aspect Films. We look forward to our upcoming Senior production of the play Summer Folk by Gorky.

During the latter part of the summer term we present our yearly Shakespeare repertoire which takes place outdoors in the Cloister of Norwich Cathedral during our end-of-year creative arts festival (Much Ado about Nothing, The Winter's Tale, A Comedy of Errors, the Tempest and most recently the Greek comedy Peace).  We are fortunate to have put on full-scale productions in Norwich Cathedral (Patriotism is not Enough, Norwich School Passion Play, written by our school chaplain Reverend Corin Child). Our pupils have also performed in recent years at the Edinburgh Fringe Festival.

Drama is equally diverse, fun and challenging for our junior pupils. Recent productions include The Heart of Robin Hood, The Wolves of Willoughby Chase, James and the Giant Peach, George and the Dragon, and The Witches (with live puppet work).

Our community Drama programme allows our 6th form pupils to devise and deliver practical projects to the wider community. In recent years this has included a Theatre in Education performance about online life and cyber bullying which had a successful tour to a number of county wide secondary schools. There will soon be a new project called Evolve aimed at teaching Primary school pupils about Physical Theatre.

The Independent study programme flourishes in the dramatic arts with student directors, writers and creatives working on individual projects. Recent productions have included Black Comedy, Stepping Out, a feminist reimagining of Ibsen’s A Doll’s House, A student written Commedia play and devised theatre work. Independent study projects allow performers from U4 upwards to get involved in productions.

Our extra-curricular weekly Spiral Drama continues to flourish as we explore all forms of acting and performance. It offers a safe space for new student writing and devised plays, improvisation and physical theatre.

For those at a senior level who are interested in theatre, film and production arts, we have developed a bespoke, non-academic course 'Polymath', which explores all aspects of performance including acting, theatre design, lighting and sound, stage management and all the elements of filmmaking. Through this course we produce a high standard of film and theatre and we invite professionals from the industry for workshops and lectures. We encourage strong collaborative and creative development in all who take part.