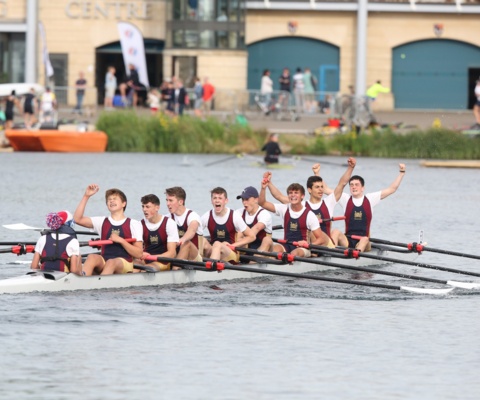 Norwich School Boat Club has long been training young rowers to success on a national stage. Our boathouse is located in the picturesque Whitlingham Country Park and pupils participate in a weekly programme of between five to six sessions, depending on their age.

Pupils can choose to join the club from Lower Fifth, when both boys and girls will be taught the discipline of sculling. From Middle Fifth onwards the boys squad will focus on rowing.

In 2020 a new introduction to our programme in the form of an inter-house indoor rowing competition was launched allowing our youngest Senior School pupils an opportunity to try the sport for the first time.

Schools' Head of the River Race

Mr Barrell started coaching at Norwich School in 2014 and has been Head of Rowing since September 2016.  His involvement in rowing started over 30 years ago, and he has coached many successful junior crews at a national level and has coached rowers to gain representations for the Junior Great Britain Team at both Norwich School and Bedford Modern School.