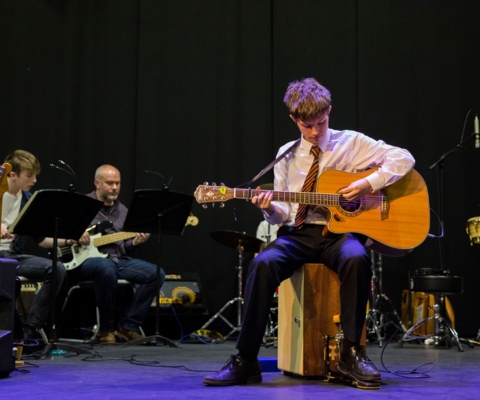 Look at the musical activities below and pick as many as you like. There are a variety of options:

Before now, music notation had only consisted of notes to tell the performer how high or low to play/sing. During the 12th Century, a system of symbols was devised to display rhythm, so the performer knew how long to hold each note for; these rhythms were simply known as longs (long notes) and breves (short notes). Here is an example of one of the first pieces to bear both pitch and rhythmic notation. This piece, Viderunt Omnes takes each syllable and spins just two words out into a piece lasting almost 12 minutes, making for a somewhat hypnotic experience.

An image of Notre Dame in Paris, where this style of music would have been chanted daily

Franz Schubert composed his Lied “Erlkönig” for solo voice and piano in 1815, setting text from Goethe’s poem. Schubert revised the song three times before publishing his fourth version in 1821 as his Opus 1; it was catalogued by Otto Erich Deutsch as D. 328 in his 1951 catalog of Schubert’s works. The song was first performed in concert on 1 December 1820 at a private gathering in Vienna and received its public premiere on 7 March 1821 at Vienna’s Theater am Kärntnertor.

The four characters in the song – narrator, father, son, and the Erlking – are all sung by a single vocalist. Schubert placed each character largely in a different vocal range, and each has his own rhythmic nuances; in addition, most singers endeavour to use a different vocal coloration for each part.

Can you tell which character is singing during each part of the song? Here are some clues:

1. The Narrator lies in the middle range and begins in the minor mode.

2. The Father lies in the lower range and sings in both minor and major mode.

3. The Son lies in a higher range, also in the minor mode.

4. The Erlking’s vocal line, in the major mode, provides the only break from the ostinato bass triplets in the accompaniment until the boy’s death.

A painting depicting the characters in the Goethe’s text Erlkönig

In the context of western classical music, music is considered to be modern if it was written at some point after 1900. Of course, composers didn’t wake up on the 1st January 1900 and suddenly change the way in which they composed music and continued to be part of this continually developing artform.

The 20th Century gave rise to some huge steps away from standard compositional styles that composers like Bach, Beethoven and Brahms would have been familiar with, pushing the boundaries of what had gone before.

Composers were trying to find novel and exciting ways to make themselves heard and continue to push music down different paths. Instruments were started to be pushed to their limits through the development of ‘extended techniques’ in an effort to get previous unheard sounds out of an instrument.

The American composer John Cage was one of many to achieve this in the 20th Century through his pieces for prepared piano. The prepared piano an ordinary piano which had had pins, screws and other items placed on or between the piano strings to disrupt their natural resonance, thus produces a variety of unusual tone qualities.

You will see on the video that the placement of the screws etc. looks very random, but they are in fact in carefully planned places laid out on a map in the front of the printed music, and it can take up to 2 hours to put them in the right place without breaking anything!

Konnakol is not itself a type of music, but a key element of Carnatic music from South India. It is a method of dividing the pulse up into rhythms to be sung by the performer, rather like how Western musicians count ‘1 and 2 and 3 and 4’ to subdivide the pulse into a rhythm. The difference here is that the counting is replaced by groups of syllables and becomes an important part of the performance rather a method for simply calculating how a rhythm should sound. The best way to imagine this is to clap a regular pulse, whilst saying ‘Ta Ka’ for each beat e.g.

This rhythm is called ‘Chatusra ½ speed’. See the list below for the ways in which you can perform up to 10 subdivisions. How quickly can you do them? You’ll have to clap quite slowly to fit all ten in.

Konnakol uses rhythmic solfege for different subdivisions of the beat called "Solkattu." Common ones are:

Watch this video to see how two professional musicians can perform this impressive music with apparent ease.

Ordinarily, we hear singers performing songs which involved the production of only one pitch at a time. However, throat singing relies upon the performer being able to produce two notes at once; a fundamental (low note) and a harmonic (higher note). All sounds in nature comprise different numbers of harmonics at different volumes, thus making each sound distinct, a feature of sound which is exploited to allow the singer to produce sounds similar to those found in nature. Many countries in Asia have developed instruments to imitate the sound of nature too, but it is throat singing which perhaps creates the widest array of sounds inspired by nature in just one instrument, the voice.