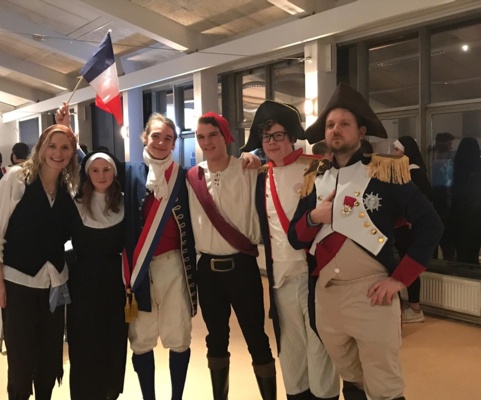 The study of History introduces us to the sheer variety of human experience. In the interconnected world in which we live, it has never been more important for individuals to have an understanding of humanity in all its bewildering complexity, and empathy for people and cultures different from our own.

The History Department at Norwich School aims to endow pupils with a lifelong enthusiasm for learning about the past. In the first three years pupils study a broad outline of English and European history from 1066 to 1918. If they choose to continue with the subject at GCSE, our focus turns to the history of the 20th Century. As a consequence, Norwich pupils are equipped with knowledge about important individuals, events and developments so that, as adults, they are historically literate citizens.

History demands of those who study it a willingness to read widely, to engage in the critical assessment of evidence, and to develop a sympathetic approach to the wide range of recurrent human problems. A large number of pupils take the subject at A level and, every year, the department is successful in helping pupils apply to read History at leading universities.

Lower 4 pupils study the Middle Ages. We begin by looking at the Battle of Hastings and the establishment of Norman rule in England before moving on to consider medieval Christianity and the turbulent relationship between Church and State. Further topics include the reign of King John, the development of parliament, the Black Death and the Peasants’ Revolt. We finish with a study of the Crusades.

In Upper 4 pupils study the Early Modern period. We begin with a study of the Italian Renaissance and the Scientific Revolution before moving on to consider the voyages of discovery and the conquest of the Aztec Empire. We study the English Reformation under the Tudors, the defeat of the Spanish Armada, and we finish with a study of the Stuarts and the Civil Wars.

In Lower 5, pupils study the birth of the modern world. In examining The Age of Revolution we focus on the French Revolution and Britain during the Industrial Revolution. Our final topic is the First World War during which pupils have an opportunity to visit the battlefields of Ypres and the Somme.

In Middle 5 and Upper 5 we follow the Cambridge IGCSE specification. Pupils study International Relations from 1918 to 2000 which includes the legacy of the First World War, the collapse of peace by 1939, the Cold War and recent developments in the Middle East.

For our ‘depth study’ we focus on Germany from 1918-1945: the Weimar Republic, the rise of Hitler and the catastrophe of Nazi rule.

There are two written exams at the end of the course and pupils also complete one coursework essay on an aspect of the depth study.

We follow the AQA specification at A level. Pupils take two examined components:

In addition, pupils complete one coursework essay of c.4,000 words. There is a choice of two topics:

History is seen by the Russell Group of leading universities as a ‘facilitating subject’: it keeps options open and can lead to a very wide variety of degree courses. Many pupils choose to study History at undergraduate level and the department has helped many pupils to go on to study the subject at Oxford, Cambridge and other leading Russell Group universities.