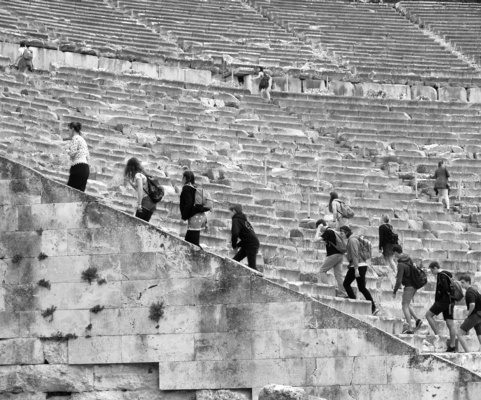 Latin, Greek and Classical Civilisation combines enthralling history, world-changing literature and subversive philosophical and political ideas. It demands and instils a high degree of intellectual rigour and cultural sensitivity towards our social, literary and historical origins.

The study of Latin and Greek involves logical thinking, precise analysis and lucid expression. Pupils invariably develop an enhanced vocabulary and an ability to write with greater fluency, not to mention a heightened awareness of linguistic processes and cultural heritage.

The study of Classical Civilisation combines literature with art history, archaeology, philosophy, geography, history, sociology and anthropology. Pupils study the languages, history, culture, religion, technology and society of earlier periods and in so doing, they gradually unearth the very foundations of modern life.

All pupils study Latin in Lower 4 and Upper 4, following the Cambridge Latin Course. They read about the lives of Caecilius, Metella, Quintus and Clemens in Pompeii before the narrative shifts to Roman Britain.

Latin grammar and vocabulary are rigorously taught in parallel with various other aspects of Classics.

In Lower 4, pupils study the Greek gods, the Greek alphabet and the labours of Herakles in art and literature before exploring two aspects of the Roman world: Leisure Activities of the Romans, and The Destruction of Pompeii.

In Upper 4 we commence a study of cultural and historical aspects of the Roman Invasion of Britain, before revising the Greek alphabet and learning about the literature and archaeology of the Trojan War.

The year concludes with a study of Greek festivals.

Lower 5 pupils who continue with Latin spend the first part of the year consolidating their grammar while they learn about the history of Rome, from its foundation by Romulus to the reigns of the early emperors.

Language work is shaped by GCSE-style questions; vocabulary learning is based around GCSE requirements. At the end of the year, every pupil should feel comfortable and confident enough to pursue either subject (or indeed both) at GCSE. The GCSE course involves the study of each ancient language with its literature. Pupils read mythological tales and historical accounts, the better to appreciate grammatical rules.

Some Lower 5 pupils pursue a Classical Civilisation course, which does not require knowledge of ancient languages. The first part of the year concerns Ancient Greece while, after Christmas, the emphasis shifts to the Roman world. As they become familiar with the style of GCSE questioning, pupils feel ready to begin their GCSE studies.

They prepare for two papers. The first invites a comparison between aspects of Greek and Roman cultures. The second concerns specific aspects of the literature and culture of either Greece or Rome. Both papers combine literary sources (in English translation) with archaeological evidence and visual material.

Latin and Greek demand and instil a high degree of intellectual rigour and cultural sensitivity towards our social, literary and historical origins. They involve logical thinking, precise analysis and lucid expression. Pupils invariably develop an enhanced vocabulary and an ability to write with greater fluency, not to mention a heightened awareness of linguistic processes and cultural heritage.

Classical languages are considered to be one of nine facilitating subjects by Trinity College, Cambridge.

We follow the OCR A level courses in Latin and Greek. Both subjects comprise four papers, all of which are taken at the end of the two-year course. Two papers focus on translation and comprehension skills; two papers concern prose and verse texts. In both Latin and Greek A level, texts are read in the original languages, alongside a wider selection of reading in translation, allowing for a greater and broader understanding of the historical and literary context in which such important texts were composed.

For examination in 2022, the Latin texts may include part of Cicero’s Pro Cluentio, the great orator’s defence of a man who is accused of poisoning his stepfather by his own mother. There may also be a historical text, by Livy, chronicling the early history of Rome and the despicable behaviour of Rome’s king, Tarquin the Proud.  Some poetry will sit alongside this rhetoric and history, most likely Virgil’s Aeneid, Book XII, in which the poet brings to a dramatic conclusion his poem on the foundation of the Roman people. There are few ‘endings’ more controversial in western literature.

In Greek, the prescribed texts include Thucydides’ account of the doomed tyrant killers Harmodius and Aristogeiton, who became the poster boys of Athens’ blossoming democracy. In the Upper Sixth, pupils may read Plutarch’s account of Athens’ ‘bad boy’. Alcibiades. In preparation for the verse literature paper, texts may Sophocles’ tragedy Ajax, which tells the story of a great hero, who is destroyed by the vengeful Athene.

Classical Civilisation focuses on the civilisations of Greece and Rome, and is a wide ranging subject involving the study of ancient literature, art history, politics, philosophy and history.  You don’t need to know any languages, all the literature is in translation.  Most importantly it doesn’t matter if you haven’t studied the Greeks and Romans before, all you need is an interest in the ancient world and its cultures. UCL recognises Classical Civilisation as a facilitating subject and Cambridge recommends it for those interested in studying the arts and social sciences.

The A Level course covers three areas of the Classical World:

The World of the Hero concerns the works of Homer and Virgil, epic poets of the Greek and Roman world. The Iliad stands at the beginning of the Western literary canon, the greatest telling of the tragic and bloody climax to the ten-year war at Troy. Virgil’s Aeneid, a patriotic epic, written to honour the emperor Augustus, considers Aeneas’ journey to Italy, and the future foundation of Rome.

Culture and the Arts topic concerns the Greek art of the 6th–4th centuries BC.  This side of the course develops visual analysis skills, in addition to literary skills involved in the World of the Hero topic. The sculpture and vase-painting of ancient Greece is viewed not only from an aesthetic perspective but also a mythological, historical and political perspective.

Beliefs and Ideas involves the consideration of the philosophical ideas and political ideals of the Late Roman Republic.  One of the most exciting times in western history, it was a period of considerable political upheaval, which eventually led to a bloody civil war and the rise of the emperors. An exploration of three very different political figures from this period, Cato, Julius Caesar and Cicero, unveils aspects of this tumultuous, and significant, half-century of Roman history and politics.

All three A level papers encourage in-depth study of the Classical world, alongside some modern scholarship and more current academic publications.

A level pupils of all Classical subjects are encouraged to attend Colloquium, a fortnightly seminar-style gathering, at which pupils present to each other on matters from the Classical world, and are invited to enjoy foreign travel to a wide variety of destinations

Owing to extensive reform over the next two years, there is a large number of relevant links. Information is arranged by year of examination: