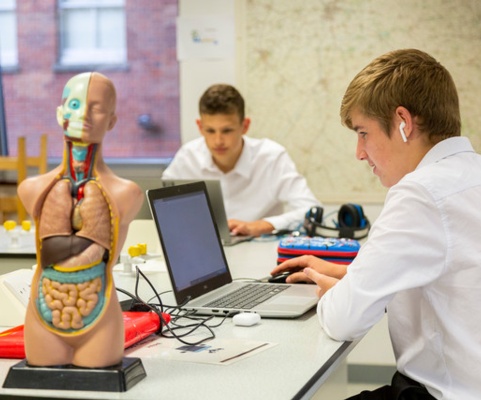 The Norfolk Summer School offers advice and support to sixth form students from across the county who are considering applying for university places in their Year 13. Run and hosted by Norwich School,  focus is exclusively directed at state school pupils with the aim of improving access to higher education and to encourage educational aspiration in the East of England, thereby fostering much-needed social mobility.

Normally, pupils would be invited to the school in person for a week of lectures, seminars and talks, but current restrictions meant that the week was re-envisaged in an online format to ensure that the event could still go ahead safely. It was felt this year’s event needed to run due to the negative impact on the delivery of education due to coronavirus, especially for Year 12 pupils who face losing a quarter of their A-Level tuition time, which risks severely impacting their life chances.

During the planning stages in the spring of this year, it became apparent that Covid-19 would make an onsite event for 100+ pupils impossible. A decision was made early to ensure that the event, now in its 18th year, could still go ahead to ensure pupil and staff safety, albeit in a remote format. It was felt the execution of a successful event in the Covid-dominated year was particularly imperative. Having considerable experience in remote teaching via the Microsoft Teams programme, Norwich School felt very confident that we could retain some elements of the normal week, such as the group lectures and subject seminars which could be delivered online. As news emerged that Year 12 pupils would be returning to school for the last few weeks of the summer term, the team decided to hold the Summer School events in the early evening to avoid pupils missing crucial, in-person school time. A total of 40 pupils took part, which, given the circumstances, seemed to be a great achievement and confirmation that pupils still needed help and had faith in an online format. It was also a manageable number to allow very personal tuition time, often on a one-to-one basis, being a modus operandi that works so well in top Universities.

During the week, staff conducted 56 subject seminars totaling 84 hours of online educational content. Delivery was from staff from Norwich School as well as from other educational establishments, Colleges and Universities. Four group plenary talks took place, delivered by representatives from UCAS, Lancaster University, Scottish Universities and London Universities. Norwich School specialists delivered three seminars on the practicalities of personal statements, study in the Netherlands and study in the USA

Once again, Covid-19 hampered plans to run an on-site summative event planned for 26th September, whereby pupils would meet their subject teachers and have their practice interviews. Again, the team did not feel that an on-site event was practical or sensible, one that mixed pupils or staff from different schools at the start of a new academic year and with Covid-19 cases on the rise. Pupils were instead offered bespoke interview practice, one subject specific and one general interview, with key members of staff via Microsoft Teams. As many universities have decided to conduct admissions interviews online for this year, it was deemed very appropriate that the pupils’ interview practice was very similar to what they may experience in coming months.

In total 15 pupils responded to the offer and booked practice interviews which took place on 26th September and the following weeks. Individual personal statement advice has been offered on an ad-hoc, on-going basis throughout the autumn term. Eight pupils are also receiving ongoing support from the school's Oxbridge tutor, undergoing interview practice and attending weekly seminars with other current Year 13 pupils.

Feedback from both pupils and staff has been very positive. Pupils reported feeling more prepared to make course and university choices. Most enjoyed the subject seminars as the most useful element, with many highlighting the good experience gaining in-depth knowledge from subject teachers.

The sessions were amazing and so helpful.

I was really pleased with how well my subject sessions went - they were better than expected!

I had the chance to study a really interesting subject that I wouldn't otherwise consider studying.

I loved the subject sessions I attended as they introduced topics outside of the school curriculum and were very interactive, which helped to further strengthen the topics and allowed me to form a well-rounded and educated opinion.

I could have some in-depth conversations and I made the tasks really specific to requests and interests.

We both agreed that the pupils that we taught were the strongest pupils that we have encountered since the Summer School started - perceptive, articulate and relentlessly upbeat, both were deeply impressive.

Sometimes we were having such a brilliant time that we went over the 90 minute session, and started early too, given how keen our students were! They were incredible.

Without a doubt, this year, … our students were the brightest and best we have come across since doing summer school. They were absolutely outstanding pupils - highly intelligent, intellectually curious and an absolute pleasure to teach for the four sessions.

They particularly liked the sheer variety of law scenarios we talked about giving them valuable material for Personal Statements and interviews as well as guidance for choosing the right place to study law.

The importance of this kind of support for young people in Year 12, who have experienced a great disruption to their education this year, has been highlighted in recent months by the Independent Schools Council and the Schools Together Group. Norwich School was particularly grateful to be used as a case study for their report “The Missing 2000”. The full report, which highlights the importance of the power of independent partnerships for the benefit of children, can be read here.

Norwich School is especially thankful to its sponsors in 2020 for their support, guidance and financial assistance to enable this valuable event to take place: