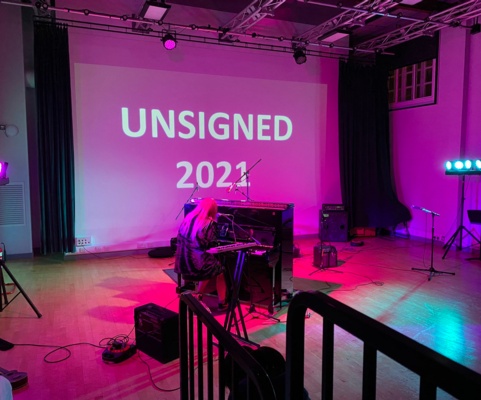 The Return of Unsigned

On Friday 19th of November we held this year’s first Unsigned concert.

We created a video in lockdown last year, but this was our first in person concert since February 2019, and we thoroughly enjoyed welcoming an audience.

Unsigned is Norwich School’s initiative for original material: it has been running for several years, but many of our regular contributors have now left school. This gave us a really exciting opportunity to expand the type of music we had on the evening.

Previously, it has been predominantly singer-songwriters on either piano or guitar, but this year we had two excellent improvisation pieces: the first on drums and bass guitar by Herbie Hilyer-Ziegler (L6) and Rufus Sergent (U5), and Will Thomas (L6) on piano, as well an original oboe piece by Alena Lai (L4). The audience were supportive and reassuring; performing live can be daunting - even more so when it is original music, as we often draw from personal experience as inspiration for our songs. Frances Byrne (U6) delighted the audience with a haunting piece, with beautifully composed lyrics.

Due to extenuating circumstances, we had two pre-recorded video performances from Isabella Rushen (L6) and Will Thomas (L6); it is a testament to their flexibility as performers that they were both able to do this at such short notice. The wide range of ages, L4-U6 (as well as Brooke Elley ON), is encouraging. It is an exciting prospect to have so much talent across the school, and it certainly bodes well for the future of Unsigned!

In terms of the future, we are hoping to hold further showcases, similar to this one, in the Lent term. In particular, I am keen to give pupils the opportunity to collaborate with other creative people. Last year, we released a Creative Crossover project, organised by Ms Wasserberg and me, in which we put together small groups of musicians, artists and poets and allowed them to co-create a piece about the theme of ‘joy’.

Hopefully, with so much talent, we can create a similar project later in the year, as the interdisciplinarity expands the pupils’ horizons. Finally, I must extend a massive thank you to Mr Weeks and Mr Ouaddane for helping to coordinate the event and to the school for allowing us to perform our music in a supportive environment.