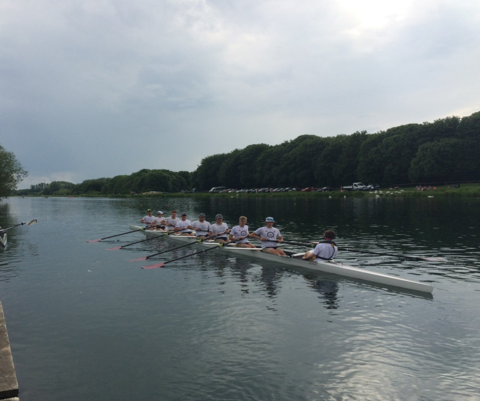 This year’s Regatta was scaled back for obvious reasons - sixth form only, with no School marquees lining the banks of the 2012 London Olympic Rowing Lake, no spectators, and not even an ice cream van to cool off the competitors post-race, nevertheless the competition was still as fierce from Schools across the UK.

Without the usual preparation of our annual training camp in Brive to establish optimum crew combinations and boat classes the rowers performed admirably and showed their competitiveness in both sculling and sweep oar disciplines.

On Monday 31st May it was the turn of the Upper 5 rowers to race in the National Sculling Regatta (held the day after National Schools Regatta).

Daniel Wright and George McKean raced in the J16 double scull event and placed a very competitive 4th place in the A final from 22 boats.

Adam Chillingworth and Herbie Hilyer raced in the same event and placed 3rd in the C final, which is a fine result for the boys who have not got as much experience as their peers.

In comparison to National Schools Regatta, Peterborough regatta is a much friendlier affair with only 1000m of 4 lane racing the course seems less daunting than the 2000m, 8 lane Dorney lake, so our school rowers were fired up to put into practice some of the lessons learned from the previous weekend.

The J16’s raced Saturday and Sunday, in various combinations of boat classes, with some of the less experienced members of the squad racing for the first time.  Side by side racing is hectic, energetic and great fun, and with limited experience in coxless boats, rowing down a straight course backwards can be hazardous, with much of the wildlife taking cover.   There were some notable performances once again from the U5’s with the pair of Wright and McKean overhauling the UEA pair in the A final to take silver.  Maisie Humphrey sculled brilliantly to get a bronze.

The 1st 8+ took to the water on Sunday, racing in both the 8+, and splitting in two to race a coxed four and coxless four.    All three boats performed amazingly in their time trials to race in A finals against mostly University crews.

The coxless boat of Seb Gotto, Benjy Tremelling, Matthew Doylend and Sonny Cooper had a stonking start in the A final and powered down the course in first place for only to be outgunned by half a length in the final 250m, to place 3rd.

The coxed four of Jamie Baker, Max Murray, Bens Scott, Aidan McCabe and Toby Finch had an impressive time trial to place fourth in the A final.   With the knowledge that there were some faster crews in the A final but only 1sec between 1st and 4th the boys knew it was going to be a tough final.  The boys took no prisoners off the start hurtling down the course at an impressive rate, (a learning point from National Schools), and led by the smallest of margins over the City of Cambridge boat club.  With only a bow ball separating the crews the race it was fabulous to watch the boys take the win.

The 1st 8+ raced for the first time this year.  The time trial meant a head to head with Bedford School, who are always a School with great form and credibility on the circuit.   Powering out of the start our bow ball led the opposition through to the 600m mark, but the University of York managed a late surge to place us 2nd in our heat and 4th overall, meaning the boys had secured the A final.  Once again the margin between 1st and 4th times were only 2s.   Lining up for the A final the boys were once again instructed to keep the rate high and heads up throughout and keep pushing, the target was to break 3 minutes.   Once again our bows led the all University opposition, and with only 250m to go the University of York once again managed to sneak a canvas in front, our boys hung on valiantly and within the last 100m closed the gap on York, but didn’t quite have the surge in speed to take the win.   A silver in Open Mens 8+ finished off a great weekend of racing, and only .5s off breaking the 3min 1000m target gave the boys confidence to move on for Marlow Regatta next weekend. 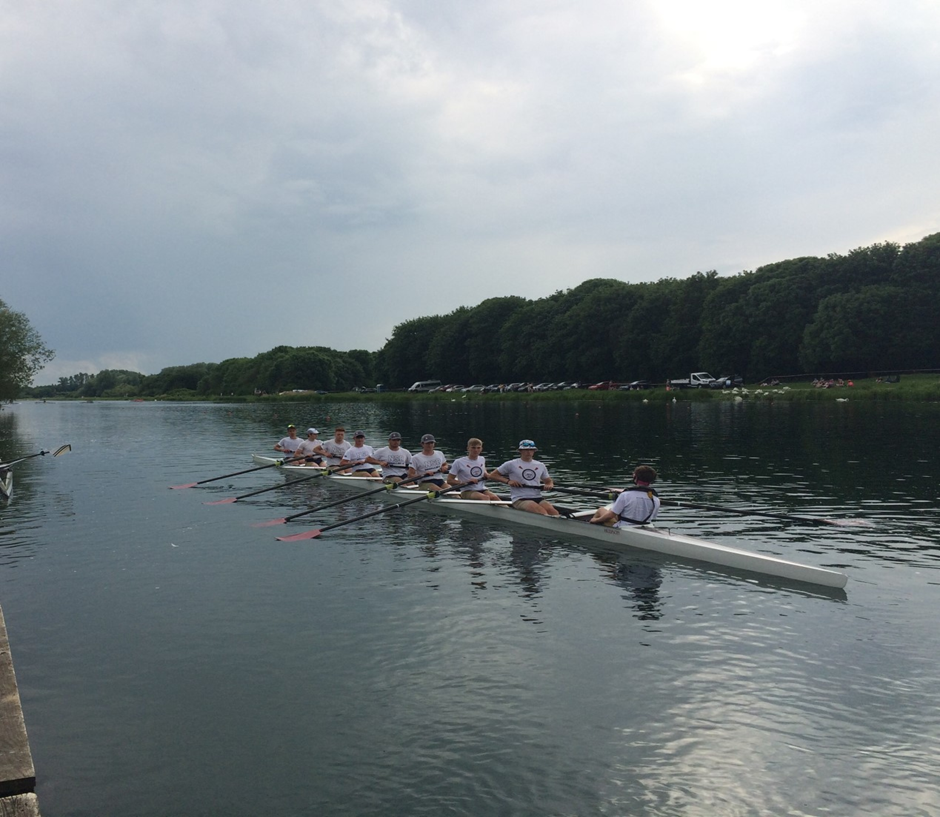