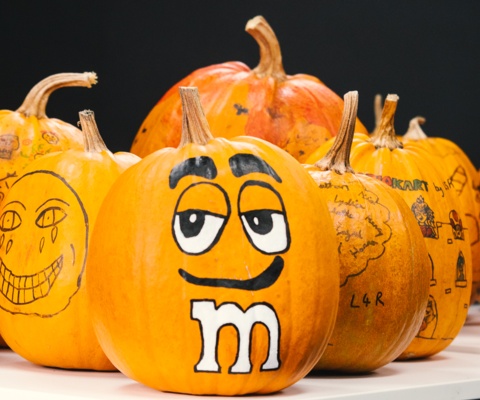 During the 2021 Trinity Term, Repton House planted pumpkins in the School allotment with the help of the now Upper 5 tutor group.  The target was to get a few pumpkins for Halloween, but little did we know that we would eventually harvest 32 pumpkins!

Last week Repton tutor groups were tasked with decorating some of the harvests.  Pupils decided to draw on the pumpkins, rather than carve them so that the refectory could then use them to cook with.  Each tutor group had two pumpkins to decorate, and the end results were amazing!

Mrs Fairweather, Dr Clark, and Mr Fitzpatrick judged the entries, and the winners were:

Winner: Will Thomas L6R for his M&M design

Runner up: Rhia Gheyi U6R for her skull and bird design

Winners: Lower 5 for their Day of the Dead and Mario Kart pumpkins and Lower 6's Repton Farm / Halloween face pumpkin.

All of the decorated pumpkins are now decorating the school site, and the remaining pumpkins have been donated to the Refectory for the catering team to work their magic with!