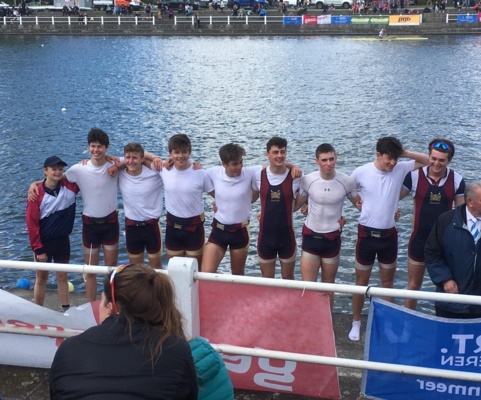 12 Norwich School Senior boys travelled to Belgium in May, on a quest to get as much race experience as possible on the 2000m multi-lane course at the 100th Ghent International Regatta.

Mr Barrell, Head of Rowing at Norwich School, reports on the Regatta:

"1st off was the quad (a bit of a wild card entry) but hotly contested with 30 other boats racing including the Dutch junior champions.  A surprise bronze medal finish started the day off nicely, and so the medal tally of super Saturday commenced.

Silver in the pair, Silver in the coxless four, Silver in junior 8’s (losing to Westminster School who had only raced this event), Gold in the coxed four. Recognition must also go to the boy's double and single who raced valiantly in their heats.

As the days rowing concluded the minibus was flagged down by one of the race officials, who asked the staff to assemble at the City Hall at a formal prize giving. Mr Barrell was presented with the City of Ghent trophy (or a picture of it as it was locked away being very old and expensive),  the club had evidently notched up enough points during the day to win the Victor Ludorum for Juniors.

Sunday’s racing could have been rather flat after the success of Saturday, but there was no stopping the desire for more silverware. The pair of George Prior and Duncan Steel raced the Greek Junior National champions and exchanged the lead several times during their race, (not to mention lanes), with a mad dash for the line in the last 200m our boys took Gold.

Mattie Sexton produced the race of the weekend to overturn the 6ft 5 Dutch National champion in a real David and Goliath battle to win gold by 0.49s.  It was a gargantuan display of true Norwich School grit and determination.

The 1st 8+ won Silver, again to Westminster School, who again had only raced in this event and were on fresh legs.

The coxed 4 dominated their race and won Gold, and the coxless four being our last race of the day finished in silver but demonstrating a real determination to the finish line.

It had been an amazing 48hours of rowing and with tired legs, big smiles and clanking of medals, Ghent Regatta has certainly been the highlight of the year so far."