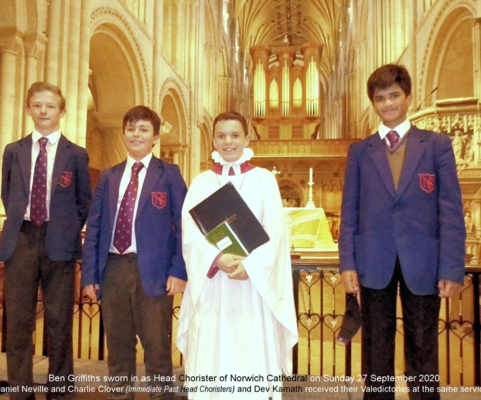 The passing of time was marked in Norwich Cathedral last Sunday as three Lower 5 ex-Choristers received their Valediction, five Lower School Probationer Choristers were admitted as New Choristers and Ben Griffiths in Upper 4 was installed as Head Chorister.

Alice Palmer in Upper 6 was also confirmed as joint Head Chorister of the Cathedral Girls' Choir in an earlier ceremony.

The Dean of Norwich Cathedral, The Very Reverend Jane Hedges, thanked Charlie Clover, Dev Kamath and Daniel Neville in Lower 5 for their faithful years of service to the Cathedral Choir.  The assembled congregation followed this thanks with a resounding and heartfelt applause.

Mr David Clover, father of Charlie, represented the Guild of Ex-Choristers.  He welcomed the three boys into the Guild and presented them with their Guild ties, and also a matching face covering.  The only hand that Mr Clover could shake, in welcome to the Guild, was of course Charlie’s and this was a touching moment.

In January Edward Alston, ex-Chorister now in  Lower 5, received his Valediction.  Last year’s Upper 4 Choristers; Charlie, Daniel, Ed and Dev made a great team.  They really supported and encouraged the younger boys in the Choir.

Charlie Clover and Daniel Neville have handed over the reins of Head Chorister to Ben Griffiths.  The Dean installed Ben as Head Chorister.  We know that Ben will take his responsibilities as Head Chorister very seriously and will carry out his duties with respect for the position he holds and with maturity.