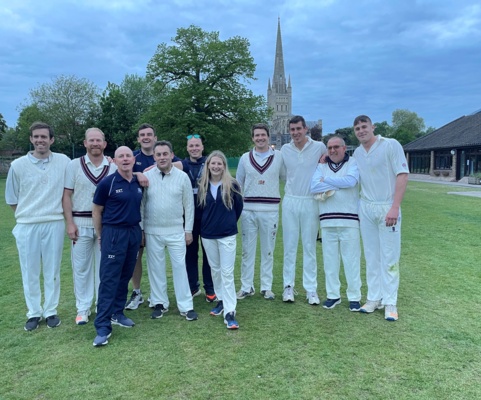 There was a lovely surprise awaiting regular members of the staff cricket team when the various “old lags”, desiccated veterans and “keen bean” amateurs who normally attempt to play cricket on a Thursday evening were met by a familiar face when they were joined by ON, Leicester Tiger and England rugby international Freddie Steward. When Mr Murray had stopped impersonating the BBC’s rugby correspondent, and finally allowed Freddie to draw breath, a cricket match was allowed to take place.

Our opponents, Marlingford CC, batted first and were soon in trouble – Steward Major (i.e. Harry) terrifying both opposition (and fielders!) by bowling a short, intense and hostile spell that did for both Marlingford openers. While Harry received some counselling and an Anger Management session from older, calmer team members, the Marlingford middle order were invited to dine out on some of Mr Murray’s Pies (a staple of the menu for visiting sides on Thursday evenings). Mercifully, our visiting international did not do himself a mischief as he ventured to stop the thunderbolts that were whistling past him with some regularity at extra cover. (Did anyone check the insurance implications of Steward Minor’s inclusion in the side?) Captain Cawkwell did, in any case, do the decent thing, ending Murray’s spell (and the carnage), evidently deciding that a win (and a fit Freddie) was the order of the day, bringing on the redoubtable “spin twins”, Messrs Moran and Sims, to dry up the Marlingford runs. The Champagne Moment of the Marlingford innings was an astonishing flying catch by Kitty Taylor that did for the opposition’s highest scoring player. When the dust had settled, Norwich were left to chase 126 in 20 overs.

As it transpired, we scarcely needed our international “ringer” as hearty hitting from Moran and Grisewood provided the perfect platform for Freddie to walk to the crease with the freedom to play as he wished. The only pressures to contend with were that of every Marlingford player wanting to be the bowler to take his wicket or the fielder to take the catch and therefore dismiss one of England’s rugby heroes. A few lusty blows later and, with the top three all retired, it was over to Steward Major and Conroy (the bus driver!) to see the Norwich side home and hosed with sharp singles and elegant flourishing strokes a plenty.