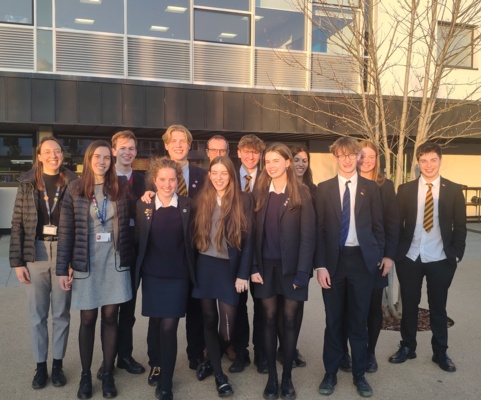 On Monday evening, ten Lower 6 Modern Linguists speaking French, German and Spanish took part in the Regional MFL Debating Competition hosted at the Perse School in Cambridge. Our pupils were supported by Will Croston, Mlle Berset, Sen. Ferrer Salamana and ON Henry Mallinson who took time out from preparing for his finals to come along to lend us his support.

Pupils in each language debated different topics taken from the Lower 6 language syllabus, ranging from the pros and cons of streaming services to the nature of secularism in France via the importance of folklore and traditions in modern society. The debates lasted 15 minutes each and our speakers took the chance to speak as confidently as possible with minimum notes and they also made the most of questioning and challenging their opponents on the points they had made. This sort of debating is challenging enough in English and doubly so in another language, especially as they were all doing this for the first time.

All our pupils acquitted themselves well, but a special mention must go to the team of Lily MacDonald and Alex Lelewel who emerged as the well-deserved winners in the Spanish debating competition. They were both able to combine their linguistic skills with well-chosen examples to illustrate the points that they made about the influence of celebrities in modern society.

It was a hugely valuable evening and our pupils not only learnt something about how to shape language to make their desired points but they also got the chance to meet fellow modern linguists from schools across the region.