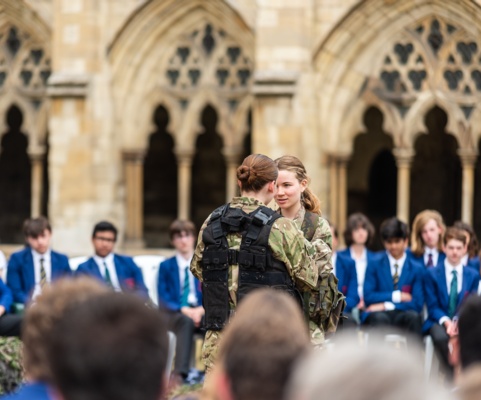 A cast of talented Senior School pupils performed in this year’s Cloister Play, a dark and gripping adaptation of Shakespeare’s ‘Macbeth’. Set in a war-torn state, the Macbeths are ruthless in their fight for survival and will stop at nothing to succeed. L6 pupil Macy-Jane Hewitt reports:

“With the recent political turmoil overseas. I believed now to be a fitting time for the narrative of Macbeth to be re-visited. Set within a military camp, my adaptation focused on the obsessive and power-hungry Macbeths who would stop at nothing in their destructive rise to power. It was a powerful production and one that challenged the lack of female roles in the original Shakespearean text and offered a relevant spin to the timeless story. I am so proud of the whole cast for what they have achieved.” - Miss Cary, Director of the Senior Play 2022

On Sunday 3 and Monday 4 July this year’s senior play ‘Macbeth’ was performed by a cast of outstanding senior school pupils in the Norwich Cathedral Cloisters. The use of the already haunting Cloisters for sound effects and 360-degree staging made the performance of one of Shakespeare's most famous revenge tragedies chilling, thrilling and extremely unsettling.

Miss Cary’s adaptation of this Early Modern classic transported the audience into the front line and the 21st century. It made each individual member of the audience not only question the brutality of war, especially in today’s climate, but dig below surface level to contemplate the cause of the ‘strange infirmity’ which riddled the Macbeths.  Whether you believe in witchcraft and magic like an Early Modern audience or think the effects of psychological disorders such as shell shock lead to the character’s demise, this production left everyone questioning and wanting more.

The reversal of gender roles in this adaptation cannot be ignored. Abi Mansley, who played Macbeth, had the challenge of executing one of literature’s most famous tragic heroes. She conveys that “The most exciting part of playing Macbeth was exploring the absolute mental deterioration he goes through”. If Abi could have played another character she would “love to be a witch because they are so iconic and they have such an overwhelming presence in the play”.

The Witches, played by Ewan Brett, Marcus O’Sullivan and Oscar Taylor put on an intense performance. Like apparitions, they made their way through the audience echoing lines in perfect unison. They were the only characters to use microphones which gave them an ominous and omnipotent tone.

As well as gender reversal, many members of the cast, such as Bibi Boyce who played Fleance, Captain and Doctor, had the exciting opportunity to multi-role adding further layers to the play.

Bibi explained that “playing multiple characters is really interesting. It means that I get to play lots of different aspects of the play. Even though Fleance is one of the smaller characters his symbolism is extremely important. I also got to play Captain and the Doctor which are more serious roles as I announce that the queen is dead”.

Emily White, who played Lady Macbeth, was a standout performer. Her ability to convey emotion to the audience and interact with her surroundings caused an immersive spell to be cast over the crowd. A highlight of the performance was when the resident peregrine falcons or ‘The raven himself’ as if by cue started shrieking. Emily took this in her stride and weaved it into her soliloquy perfectly.

I had the chance to interview cast members Bibi Boyce, Olivia Elverson and Ewan Brett before the evening show on Monday and here’s what they had to say:

What inspired you to audition for this year’s senior play?

EB ‘I like Shakespeare, and I like Macbeth. I’ve always wanted to do Macbeth in the Cloisters. It sounded really cool and the experience has been amazing.’

OE ‘I love the Cathedral. It’s a very beautiful setting. I also studied Macbeth at GCSE so I thought I might give it a go. I used to do drama at my old school and I wanted to give it a go at Norwich School.’

How do you feel about this take on one of Shakespeare’s classics?

EB ‘I think it’s a great take. Bringing this play into modern times makes it more relevant, contemporary, and the adaptation of some of the words makes it more accessible particularly to younger audiences like we had in the matinee.’

BB ‘At first, I was a bit hesitant as I didn’t know how it was going to work. Now we’re all in military gear I think that it’s a really interesting take and I really enjoy it.

OE ‘I like it. There’s female unity which is lovely. I also like the modern spin and combat costumes. We also haven’t changed much of the script so there’s a juxtaposition between the Shakespearian language and the modern theme.’

What was challenging about bringing this version to life?

EB ‘This version is relatively similar in a literary sense, however, all the props were modern. We got to use guns and adapted sound effects such as artillery explosions and gun fire in a lot of the scenes. This makes it feel a lot more realistic and hard hitting.’

BB ‘When all the artillery and gunfire goes off you can’t hear your cue!’

OE ‘When we first rehearsed, we were in Blake Studio and I was nervous about bringing it to the Cloisters.’

Is there a lasting message you want members of the audience to take home?

EB ‘Shakespeare’s brilliant. Do a play in the Cloisters if you have the chance.’

OE ‘Shakespeare's plays can be adapted so many different ways. There’s no one strict format.’

What would you say to younger pupils who are thinking about taking part in theatre at Norwich School?

EB ‘Do it. It doesn’t matter if you’re nervous. Really, it’s kind of the point. It’s an amazing feeling once you’re finished and it’s good fun.’

BB ‘I’m new this year and at my old school there were a couple of opportunities to do things but I'd say that there’s a lot more at Norwich School. I feel that the level of production is higher as I've never done anything as good as ‘Macbeth’ has been. I’d definitely encourage people who are new to the school or younger in the school to get involved in the Cloisters’ play because I loved it.

OE ‘Definitely do it. It’s really good fun. It’s a uniting experience as you get to know people in other year groups. The celebratory teas are also really good!’

How has the location of the cloisters changed your performance or has it?

EB ‘This necessarily isn’t the way you have to do it in the Cloisters but we decided to do it in the round which means you’re constantly surrounded by the audience. This means you have to make sure you’re acting to all sides of the audience. We also use the space around the green for other scenes such as the marching scenes. This adds more atmosphere as the audience feels surrounded. The space is great and the echos created due to the sound effects are really atmospheric.’

BB ‘It reminds me to turn around and puts me more into character as the audience is everywhere. This makes me really think about staying in character when I'm turning and stumbling. There isn't a backstage which I find more enjoyable because we are immersed with the audience. The Cloisters also made the performance much more dramatic with the Cathedral in the background. In some scenes, I stare up to the Cathedral and in one performance the sky was grey and it started to rain. I hope this enhances the scenes and drama.

OE ‘The open space is amazing and it prompted me to project my voice.’

A huge thank you and congratulations to Miss Cary for directing this adaptation. 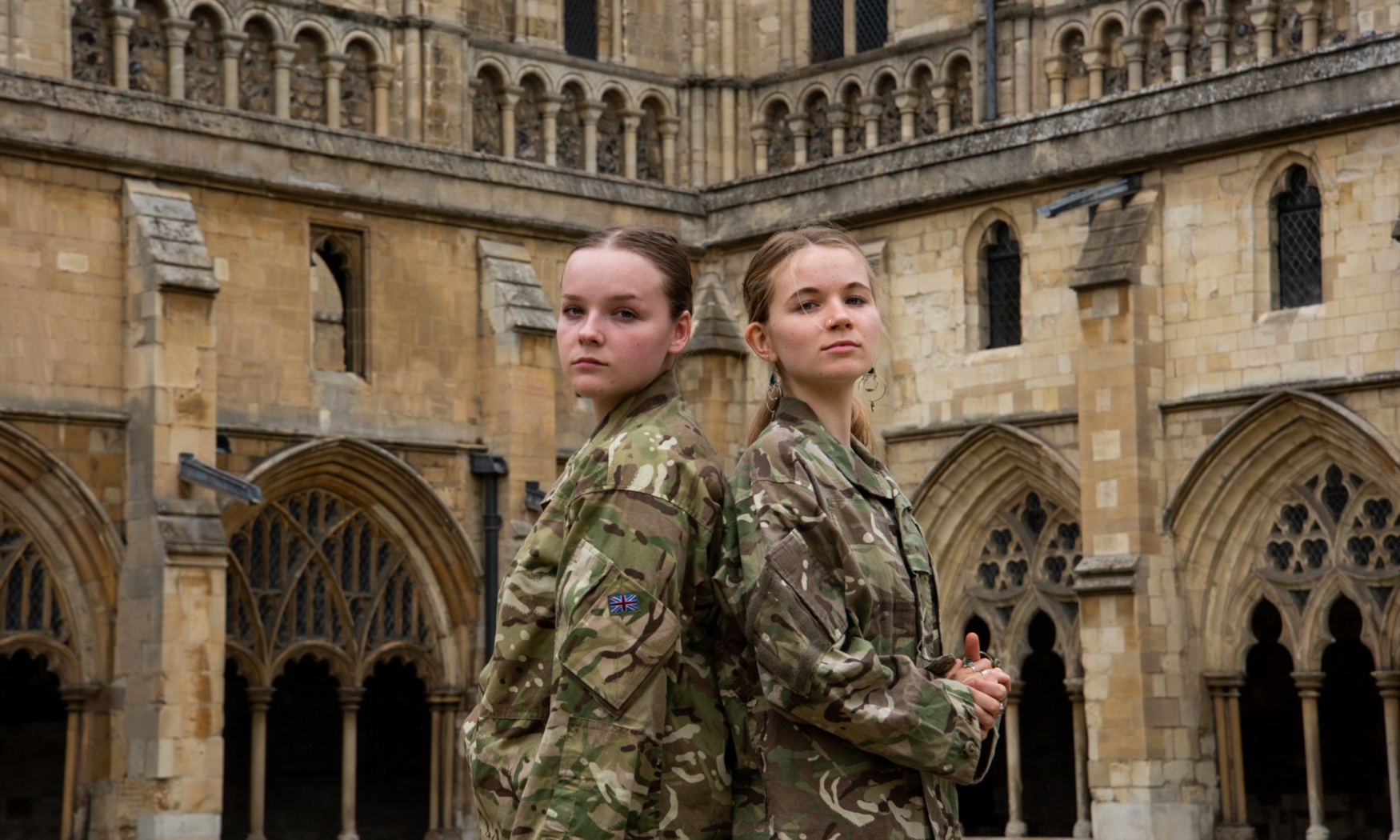 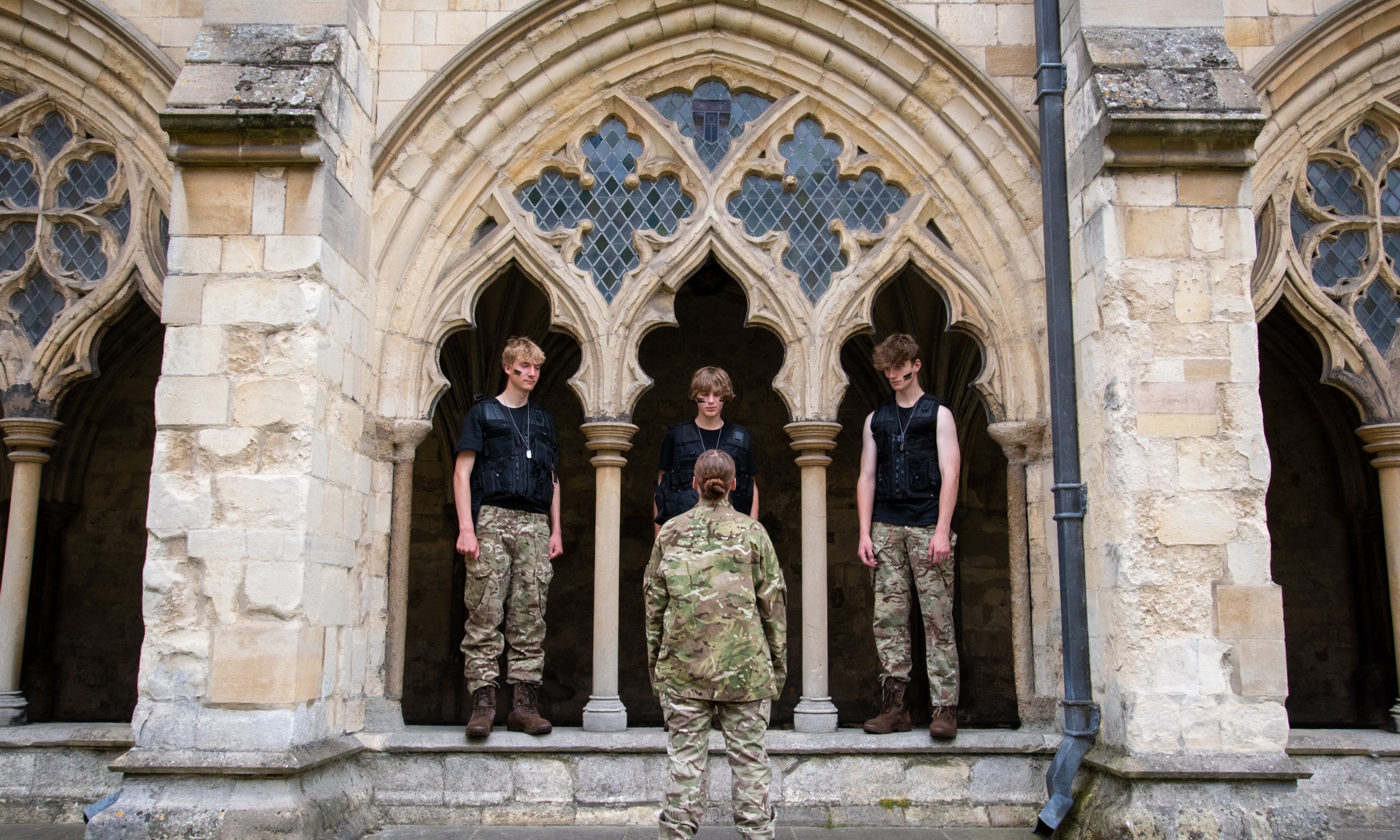 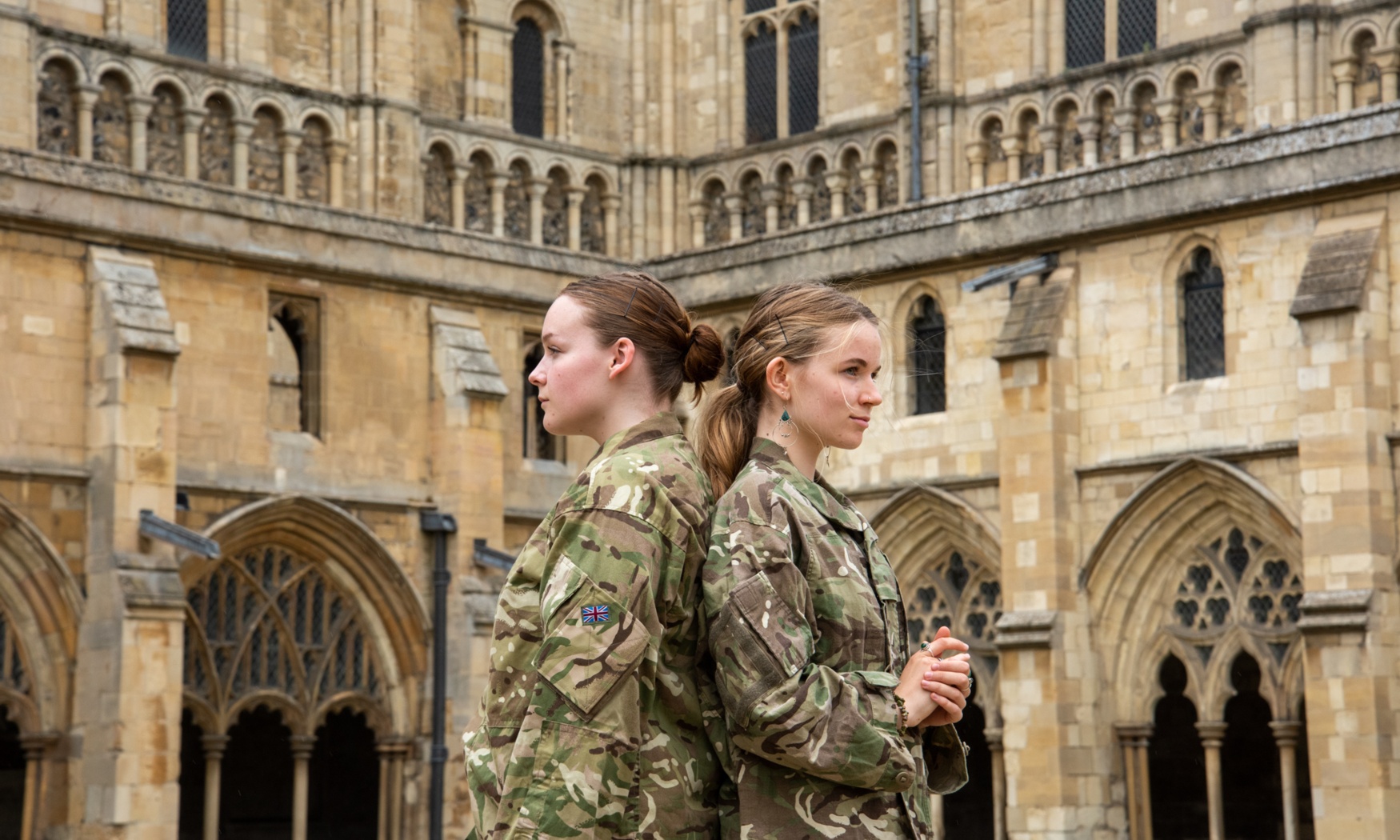 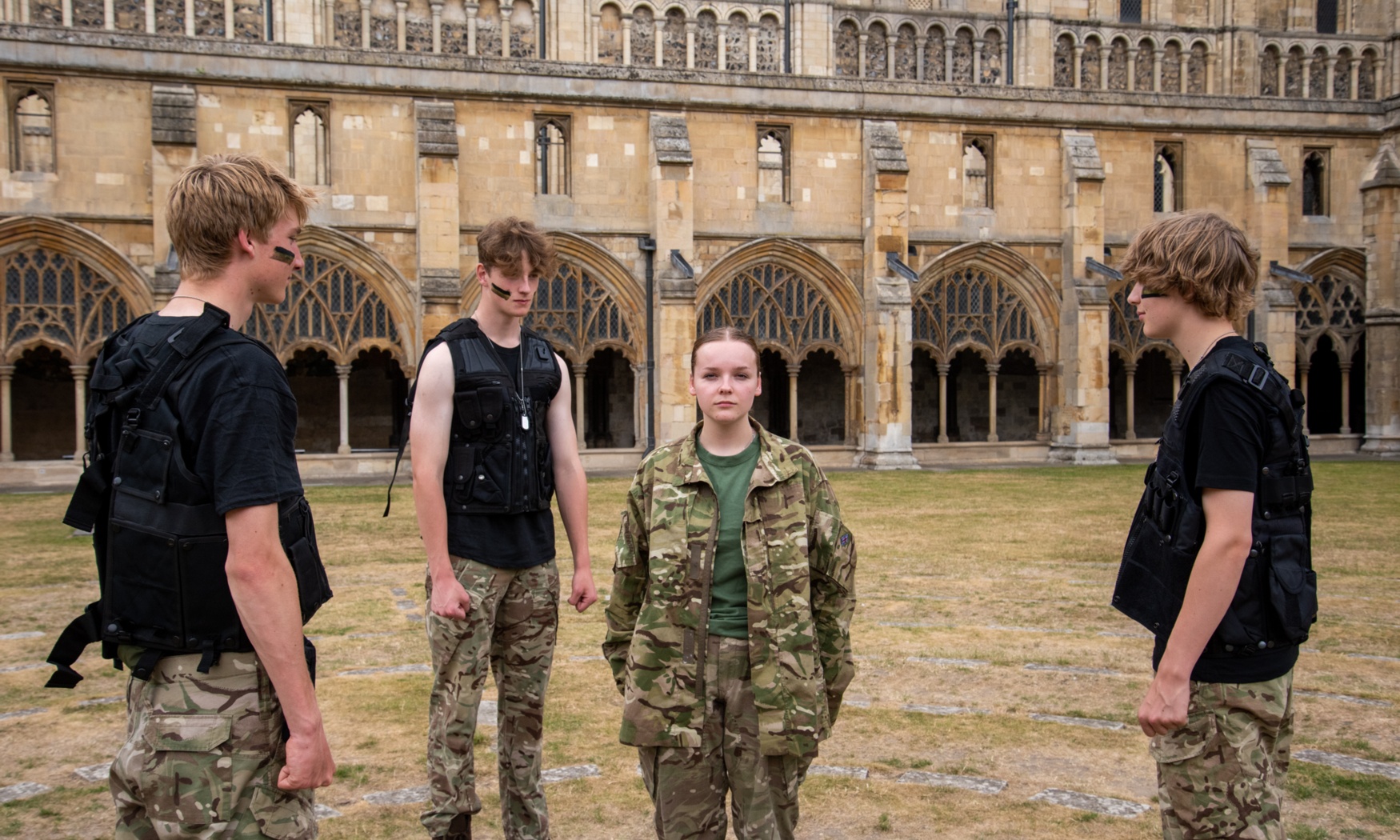 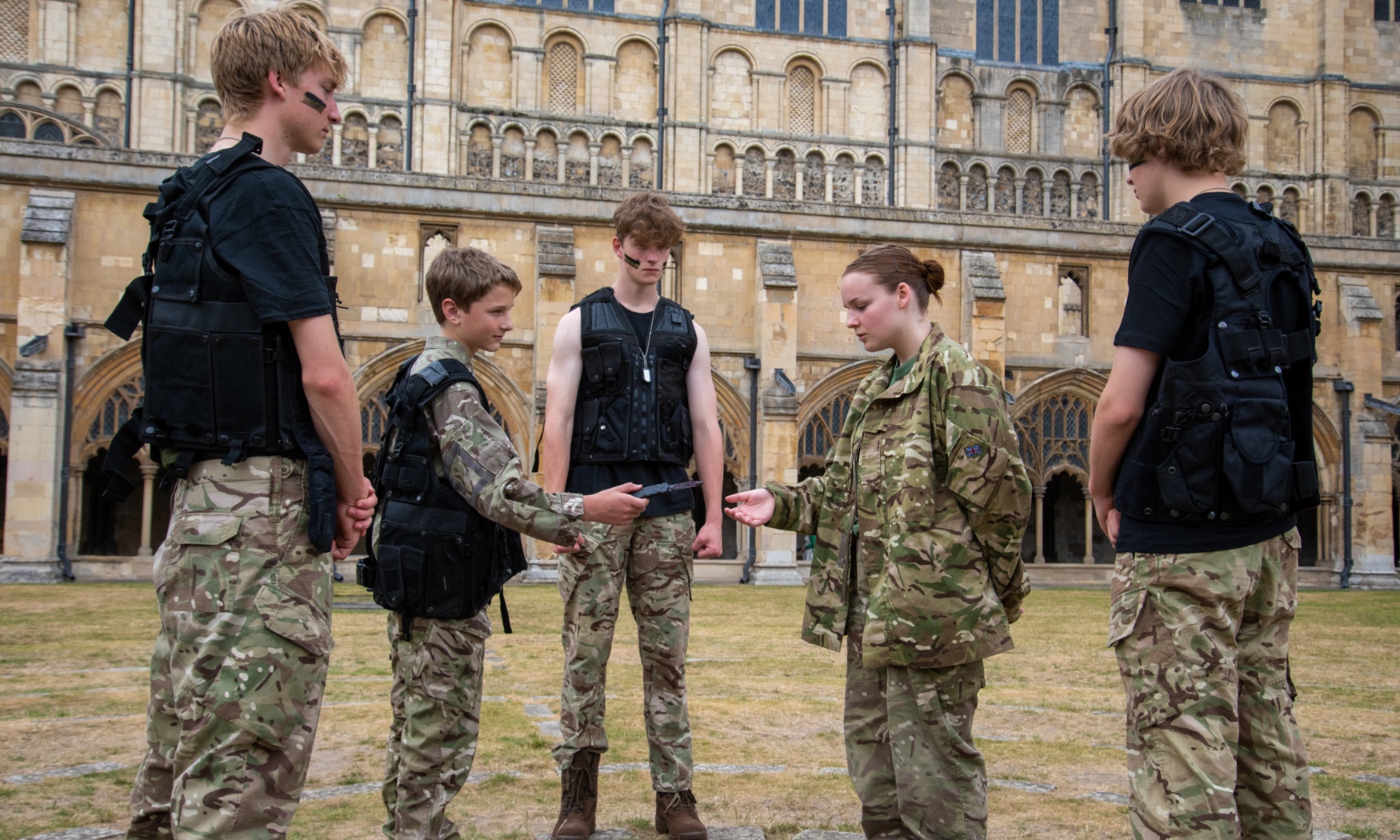 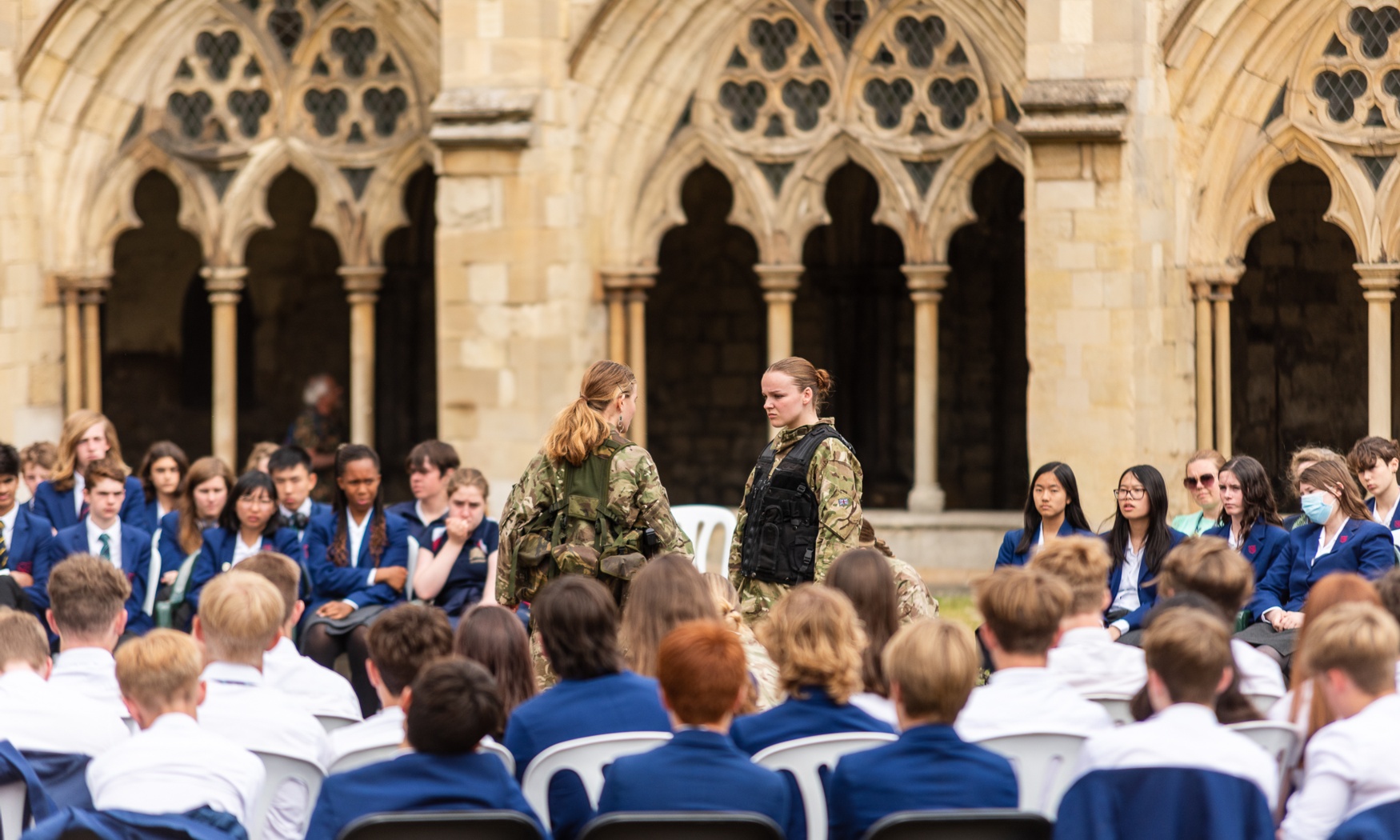 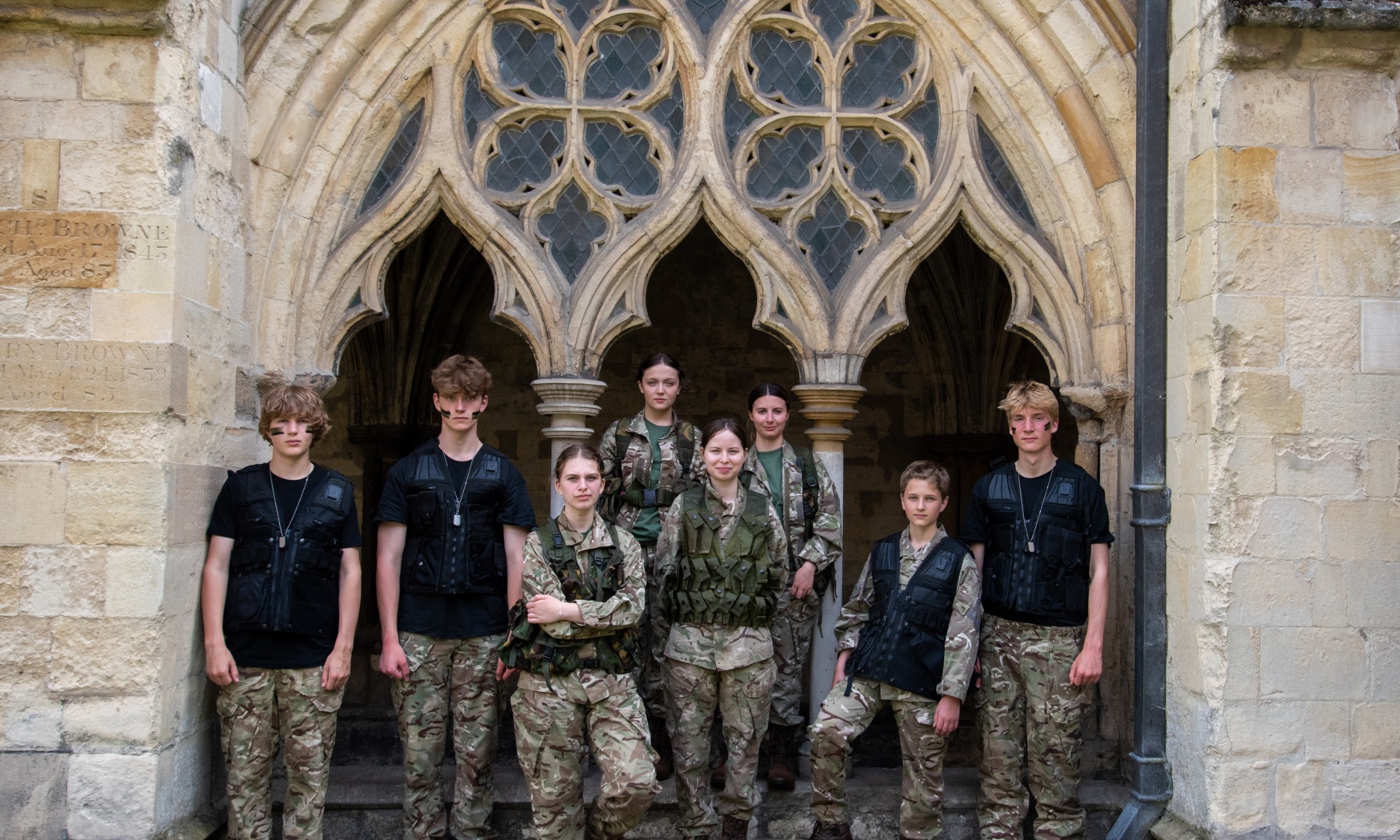 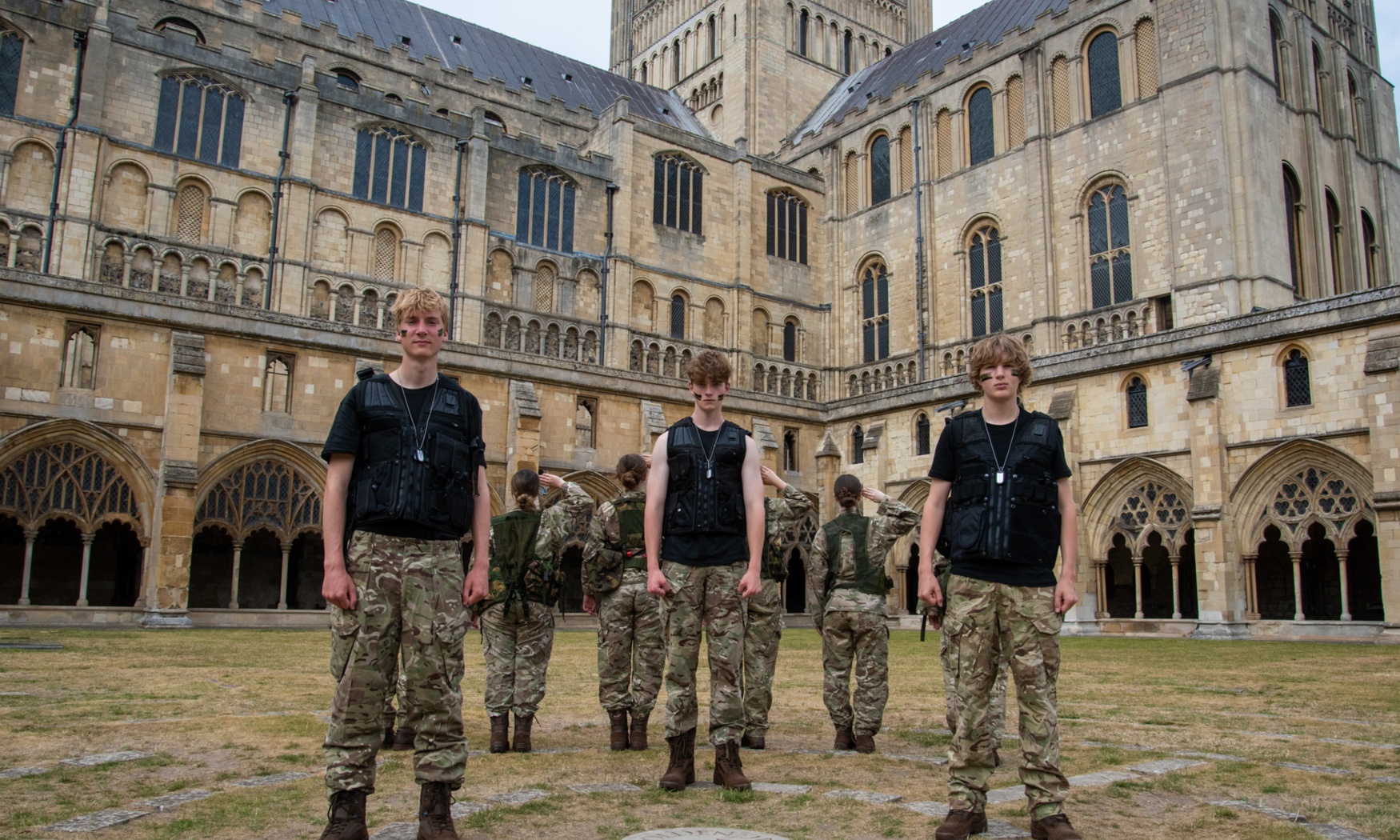 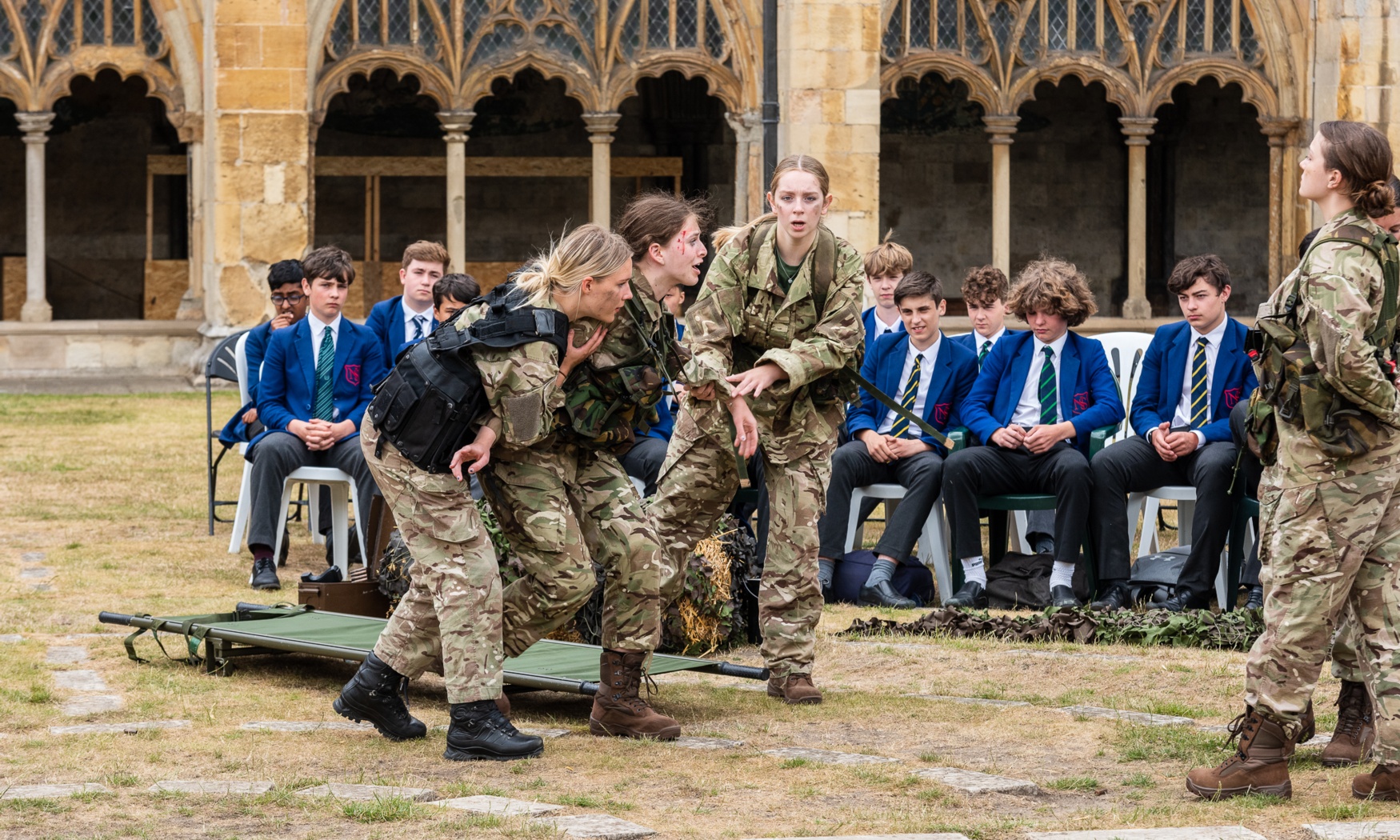 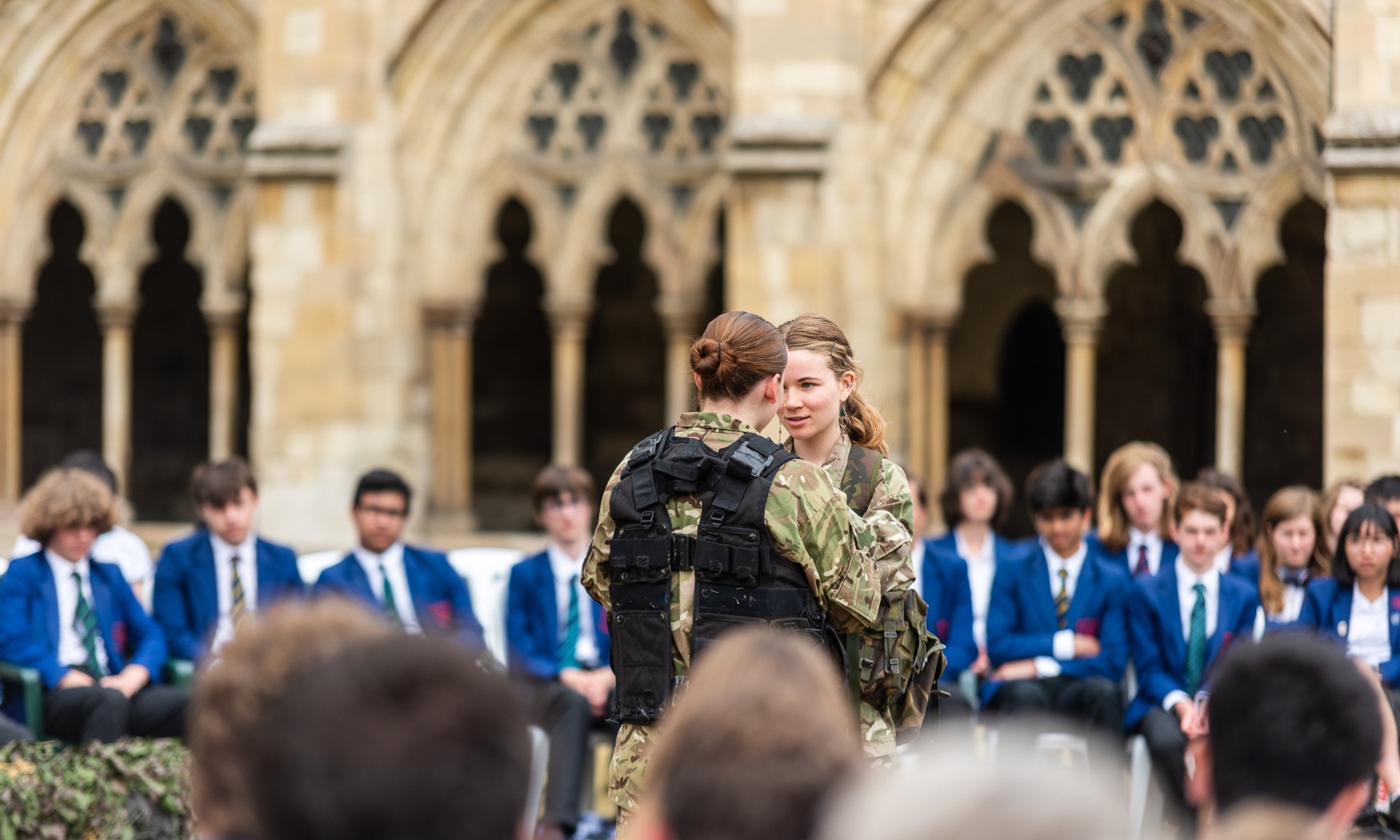