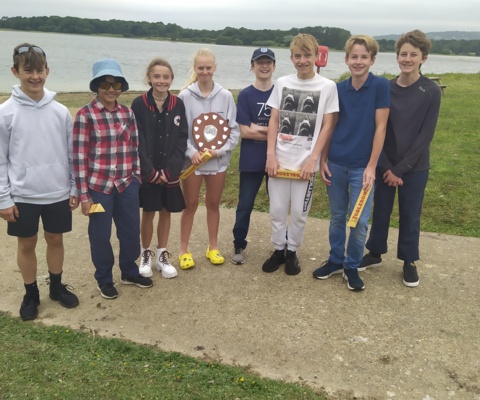 Mr Bedford-Payne reports on the action from the Hoad Shield:

The school’s intermediate team both reached the semi-finals of the prestigious Hoad Shield boating event on 18 June, overcoming significant challenges from a number of teams from Sevenoaks, Tonbridge, Claires Court, Reigate School and King's School Canterbury.

The Red Team - Rosie Pank (L5) and Zoe Hornberger (L5), George Davies (L5) and Archie Wilkins (L5) - lost their first race, but then sailed superbly to win their next 14, emerging as victors in a keenly fought best-of-three final round.

The Blue Team - Milo Clabburn (L5) and Callum Wallis, Ralph (subbed by Darcy Wilkins (L5), who just happened to be there, in Kent, watching with her parents!) and Kyriel Fynn (L5) (who took over as helm, even completing one race single-handedly after Ralph had been ferried ashore) came an impressive 4th. This is the first time in the school's history that Norwich School has had two teams in the semi-final of the Hoad Shield.

Special mention must be made of Rosie Pank’s phenomenal boat handling skills and her team racing manoeuvres. She converted many losing situations into winning ones. The other teams, and the umpires, were flabbergasted by her prowess. Similarly, Milo Clabburn did all in his power to secure the Blue Team’s progression to the semi-finals.

Before the end of term, the team will travel to Somerset for a two-day National Championships at Chew Valley Lake near Bristol. We wish them well for their next challenge.