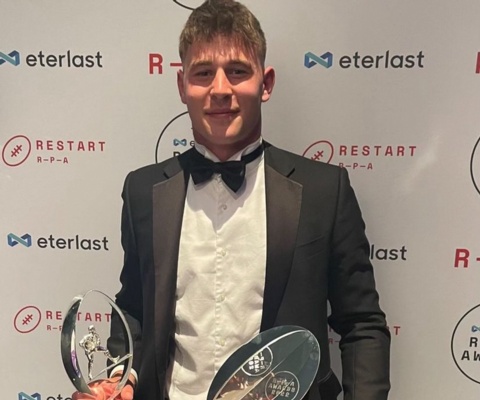 The Leicester Tigers and England full-back, who has won 10 England caps since making his international debut last summer, beat fellow England teammates Marcus Smith and Ellis Genge for the England Men's Player of the Year award. The award was voted for by members of the Elite Players Squad.

"I was surprised to have even been nominated for the award, so to win it was an incredible feeling," said Steward. "It tops off a year full of incredible experiences in an England shirt that will stay with me and my family forever. I’ve been fortunate to be part of a team with some unbelievable rugby players and individuals that have helped me learn so much."

Freddie also took the title of Young Player of the Year for his role in the resurgence of Leicester Tigers this season. Freddie made his Leicester Tigers debut in 2018/19 while still part of the club’s academy system and went on to become a regular at full-back as the academy team won the National Under-18 League title without losing a game in successive seasons, before making his senior debut in the Premiership Cup at Northampton in January 2019.