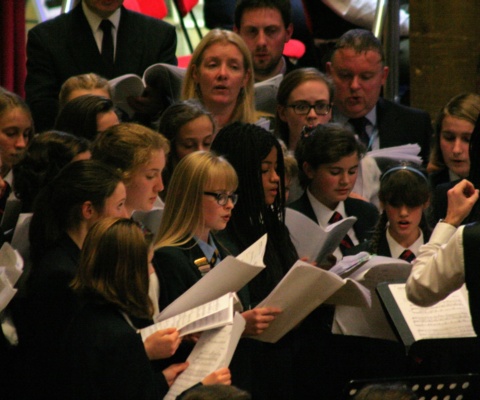 Choristers outreach event brings together 300 students from across the county

Last week on the 7th November, the High School's Choir Festival was held at St Andrews Hall, in which 300 students from across the county came together to produce a night of beautiful music for the choristers to cherish.

The pupils, ranging from Lower 4 to Upper 6, had the opportunity to take on wonderful classical choral mass choir repertoires, such as The Hallelujah Chorus by G.F Handel and O Fortuna from Carmina Burana by Carl Orff. To make the concert more relatable to younger choristers, we also had medleys of pop songs such as Fix You by Coldplay, and When You Believe by Mariah Carey, as well as an arrangement from Wicked the musical.

To make this night even more spectacular, the Norfolk County Symphonic Wind Band charmed the hall with three astonishing pieces: Critical Mass by T. Stalter, Hercules from Disney by A.Menken arr. Custer, and Chase The Sun by R. Wiffin. They also accompanied the choir on several pieces throughout the night.

Considering these young musicians had only met for the first time that day, the quality of music produced was extraordinary. Thanks must be made to Ms. Walton, Mr. Grote and Mr. Stowell, as well as all the teachers and parents that came to support the event.

The concert included pupils from: