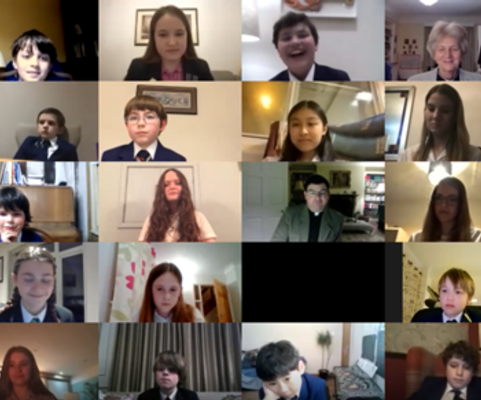 Choristers meet His Royal Highness The Earl of Wessex

Norwich Cathedral Choristers recently had the opportunity to meet His Royal Highness The Earl of Wessex, Prince Edward, on a Zoom call. The Earl of Wessex joined the young singers to help name a new society to support music at the Cathedral.⁠⁠

The newly-named Statham Society aims to bring together all who enjoy and support the music at Norwich Cathedral and to raise funds for special performances, recordings and music education projects as well as subsidising choir tours for those in financial need.⁠⁠
⁠⁠⁠⁠
Prince Edward, who is patron of the Cathedral’s Music Appeal, said it was “an absolute pleasure” to be involved in helping to ensure the success of the musical life of the Cathedral long into the future.⁠⁠

Prince Edward told the choristers: “Keep up the great music and the great singing and I can’t wait until another opportunity to hear you all actually singing back in the Cathedral for real once again in person.”⁠⁠

Edward Lott (L4), one of the Choristers on the Zoom call, has written about his experiences meeting Prince Edward:

"The boy and girl choristers were given the privilege of meeting HRH The Earl of Wessex on the 25th of March on a Zoom call. During this Zoom meeting, some choristers discussed the advantages and disadvantages of online rehearsals which the choristers were doing earlier this year. Some disadvantages included: Not being able to hear people around you and sometimes annoying your parents and/or siblings for singing loud. On the other hand, there was an advantage: Some days there was no morning rehearsal so we could stay in bed longer. I’m sure all, if not, most choristers liked that! Also in the Zoom call, some choristers talked about a name for the new music fund, since that was the main purpose of the Zoom call.

In the middle of the zoom call the Master of Music, Mr Grote showed a video of the ‘Sing Forever’ project which took place last year in the first UK lockdown. Choristers throughout the UK were asked to join in with the project by sending a video of themselves singing a few verses of the song. Many choirs took part, and the end product was amazing! If you want to see the video, it is on YouTube and is called ‘Sing Forever featuring UK cathedral choristers.’

It was nice meeting a member of the Royal Family and I would like to meet some other members, and I’m sure many other choristers would as well."