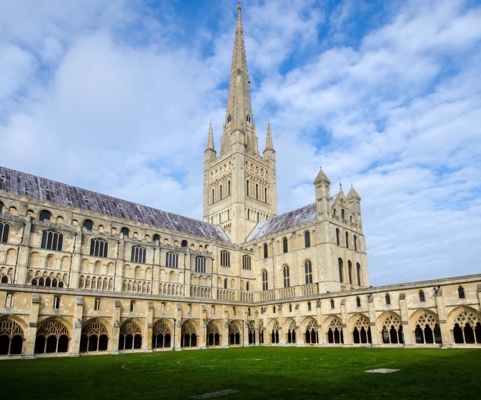 After a challenging year, the choristers celebrated the end of their year on Sunday 4th July, a week earlier than usual due to the imminent arrival of Dippy to the Cathedral. During Evensong there were Valedictions for the leaving choristers, both boy and girl leaving choristers. Earlier in the year, the choir had said farewell to Caio Boyero who had served the choir with an amazing voice, great musicality and dedicated service. At Easter, the choir said farewell to Head Chorister, Ben Griffiths. Ben had shown great maturity during his time as Head Chorister and had earned the respect of the younger boys. Both boys were thanked and blessed by the Dean of Norwich Cathedral, the Very Revered Jane Hedges, for their faithful service.

Brooke Elley and Alice Palmer, Cathedral girl choristers and Norwich School pupils, had both served the choir for many years. They too were thanked and blessed by the Dean of Norwich Cathedral. Esther Wiggins and Alice Wollocombe were also recognized during the service for their contribution to Cathedral life whilst they served as girl choristers.

All leaving members of both choirs were presented with ties and pendants of membership to the Guild of Ex-Choristers. Presentations were made by Mr David Clover and Mrs Esther Platten, representatives from the Guild.

Following the service, everyone gathered in the Cloister Garth for a picnic. The Master of Music, Mr Ashley Grote, thanked everyone for their support over the last year, which had proved challenging due to the lock-downs and COVID restrictions.  A presentation was made to George Inscoe and his fiance Kirsty who are getting married, after various date changes, during the summer.

The afternoon was rounded off with singing by the joint choir of the England football anthem Three Lions ‘It's Coming Home’.

After a challenging year, it was wonderful to join together, albeit socially distanced, to celebrate all that had been achieved.  We look forward to a break over the summer.