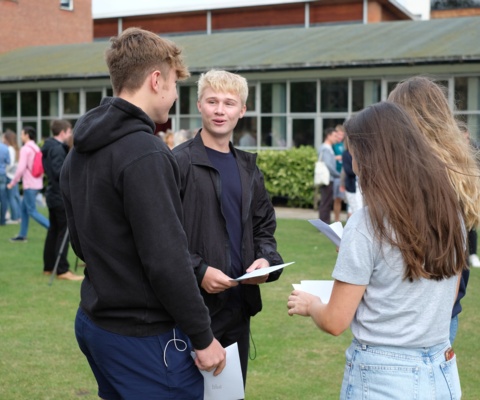 Norwich School ensures that pupils are given a broad range of extracurricular opportunities, whether that be through sports, the arts and community service or leadership roles. Many of the pupils enjoying success today have an interesting story to tell!

Below are just a few of the many individual stories:

Cameron Aldren (below) picked up an incredible 4A*s today and will study Chemical Engineering at Imperial College London. “I have enjoyed my time here and the school’s attitude of a hard-working environment for everyone, no matter what your ambitions are, is one which helps to bring out the best in everyone he said”. His mother added, “All the children respect each other for their talents and contributions to the school. It feels like no matter who you are, you will be encouraged to find your talents, and everyone is included. All pupils are ambitious and are really supportive of each other’s success.” 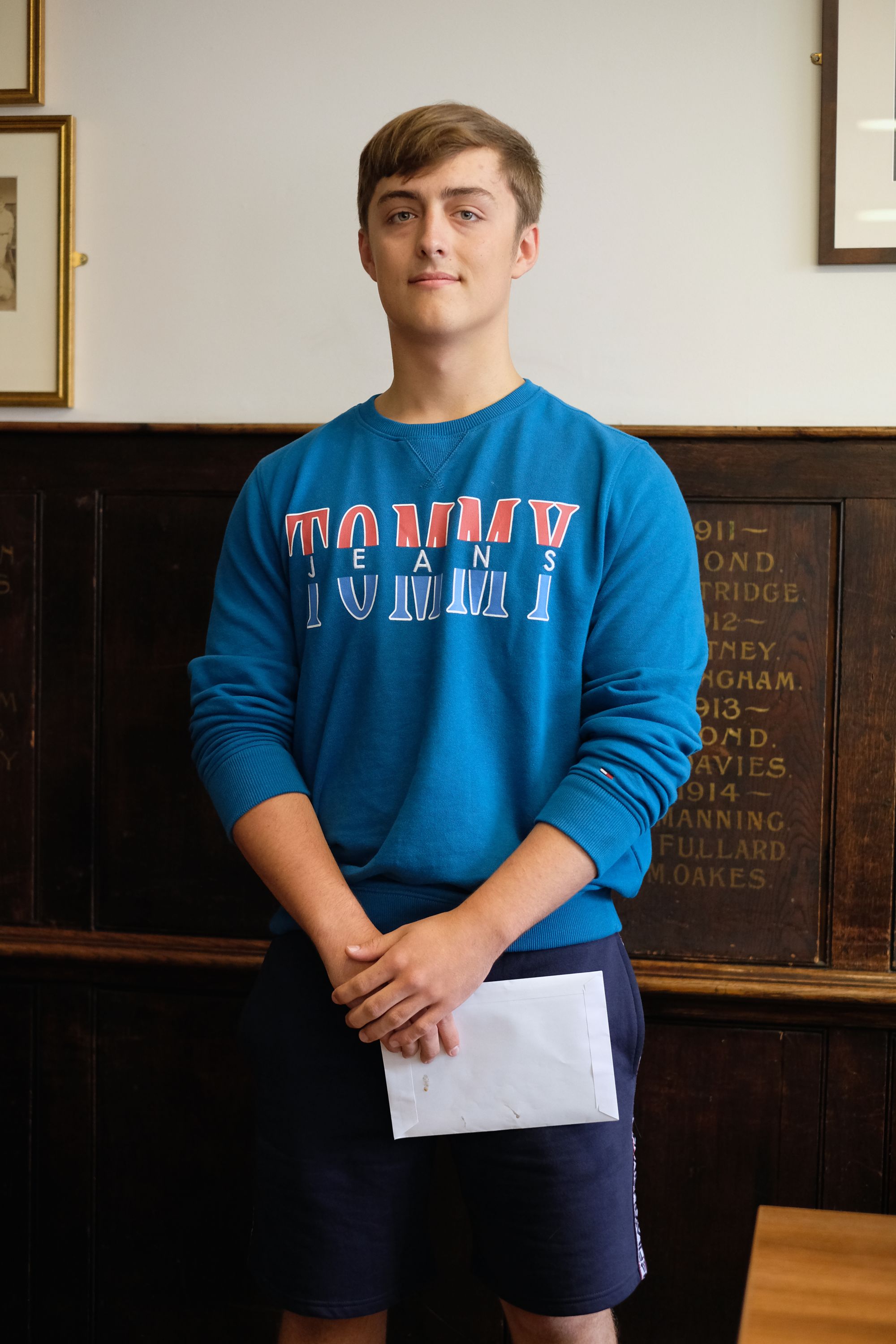 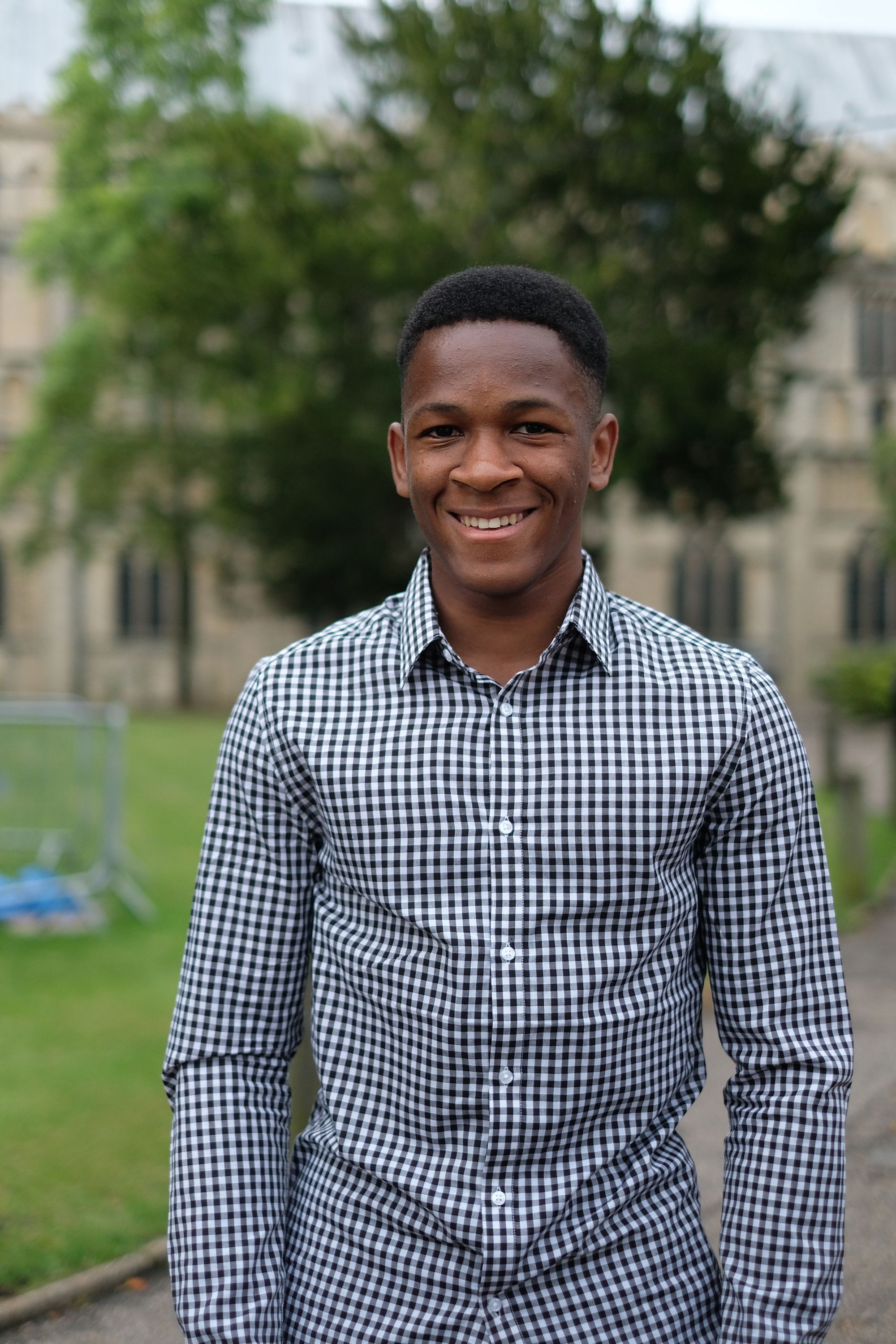 Dodovah Iwo (above) is celebrating collecting 3A*s today. Having joined the school for Sixth Form., he will go on to study Dentistry at Newcastle University. Dodovah said that he joined the school because of the academic goals he wanted to achieve, but that he was also able to make the most of extra-curricular opportunities. “I really enjoyed playing for the football team and it provided a good balance with my studies,” he said. 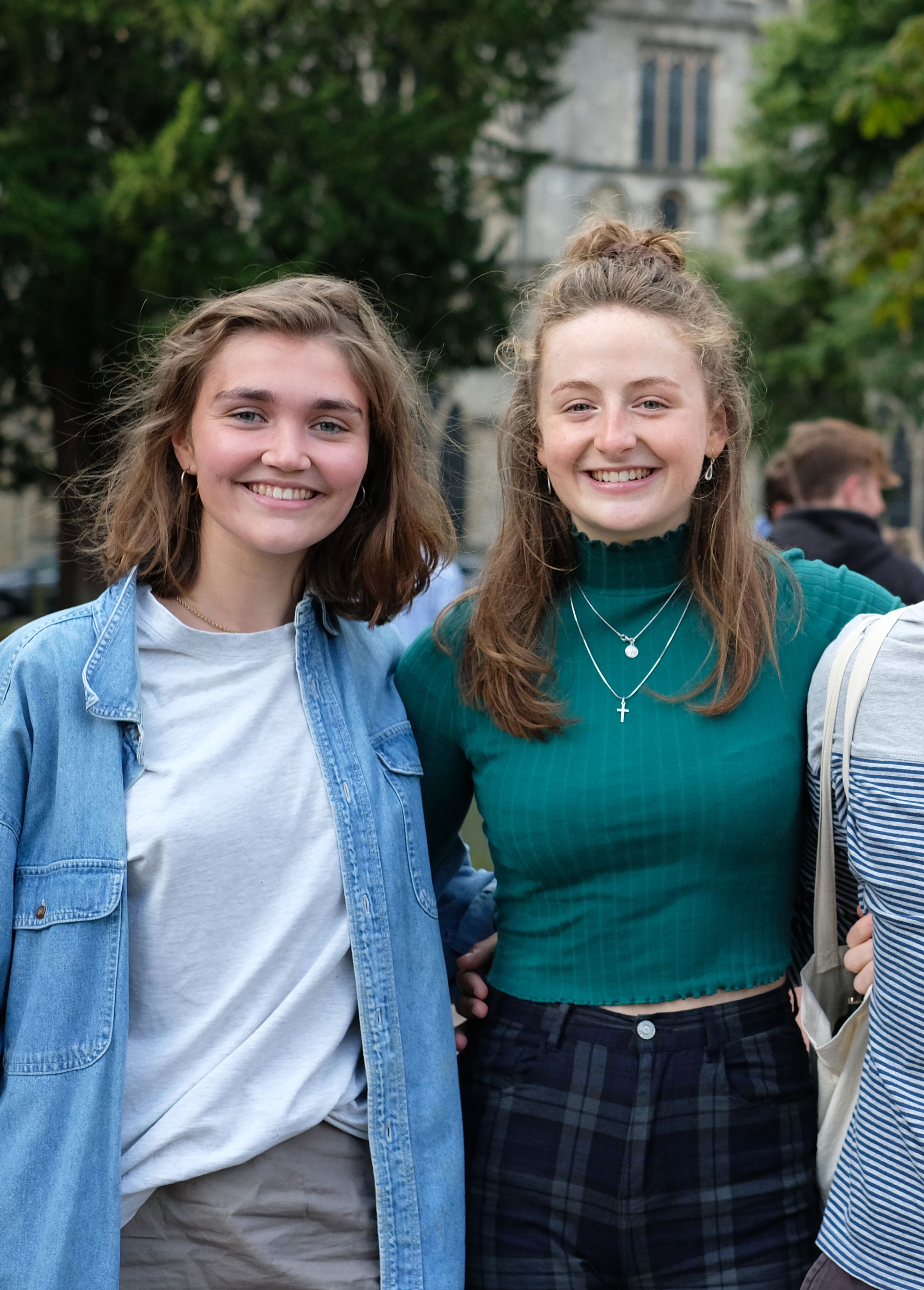 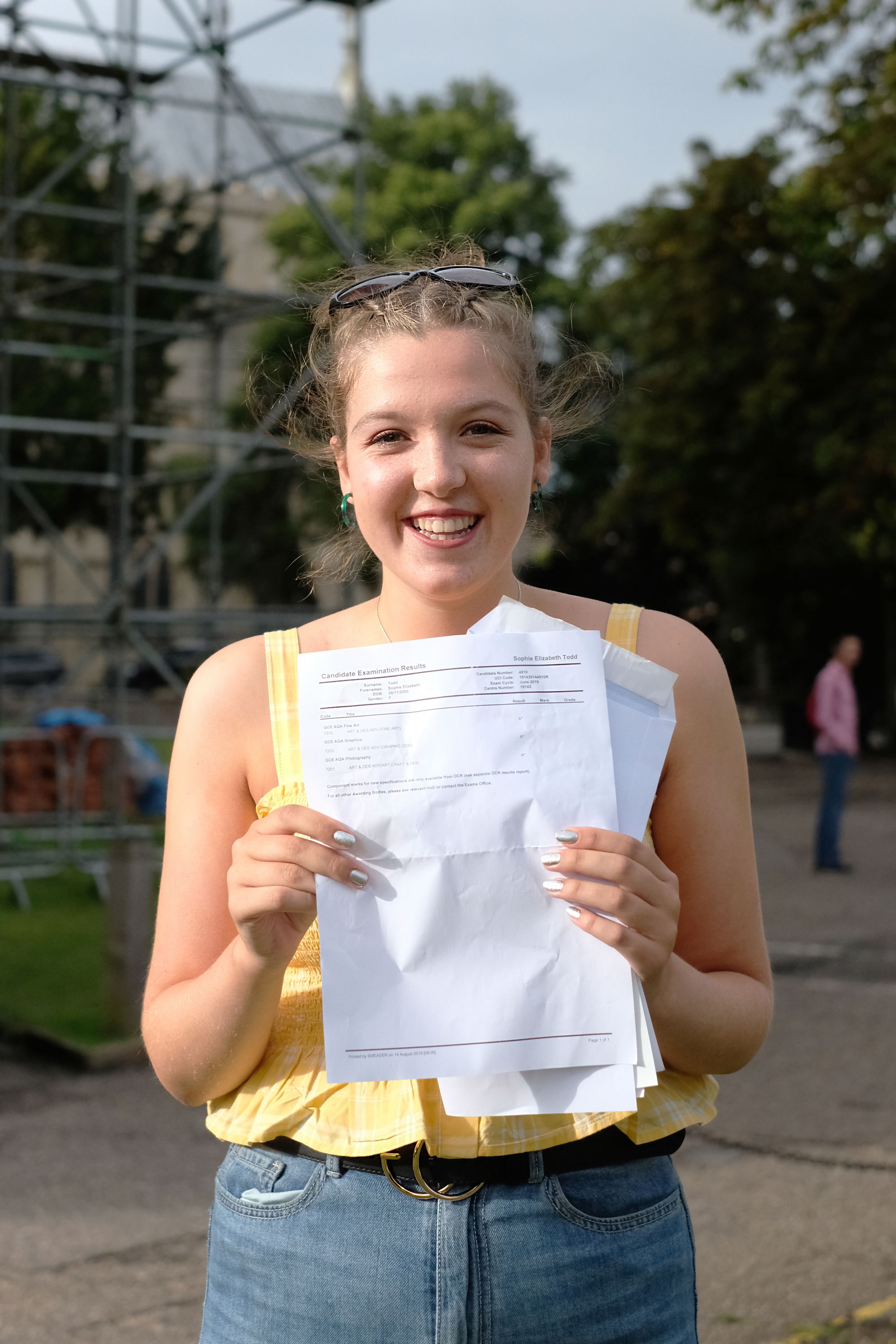 Jemma Luck (3As, 1A*) and Emily Rash (2As, 1A*) both collected great results whilst also being Deputy Heads of School. Jemma believes that the leadership opportunities will be advantageous in the future. “At times there was a lot going on but if you are organised then you realise you can achieve lots in addition to the academic side.”. “It is the people that make this such a special place,” added Emily. (pictured above)

Sophie Todd achieved 3A*s in 2D Graphic Design, 3D Design and Art – she will go on to study Fashion, Communications and Information at Nottingham Trent. During her time at the school Sophie was very involved in organising the annual Charity Fashion Show and she has recently had artwork shortlisted for the Sir John Hurt and Sworders Art Prizes at the Holt Festival. “Both leading the Fashion Show and the NYC trip that I got to go on, massively fueled my inspiration for A levels," she said. (pictured above) 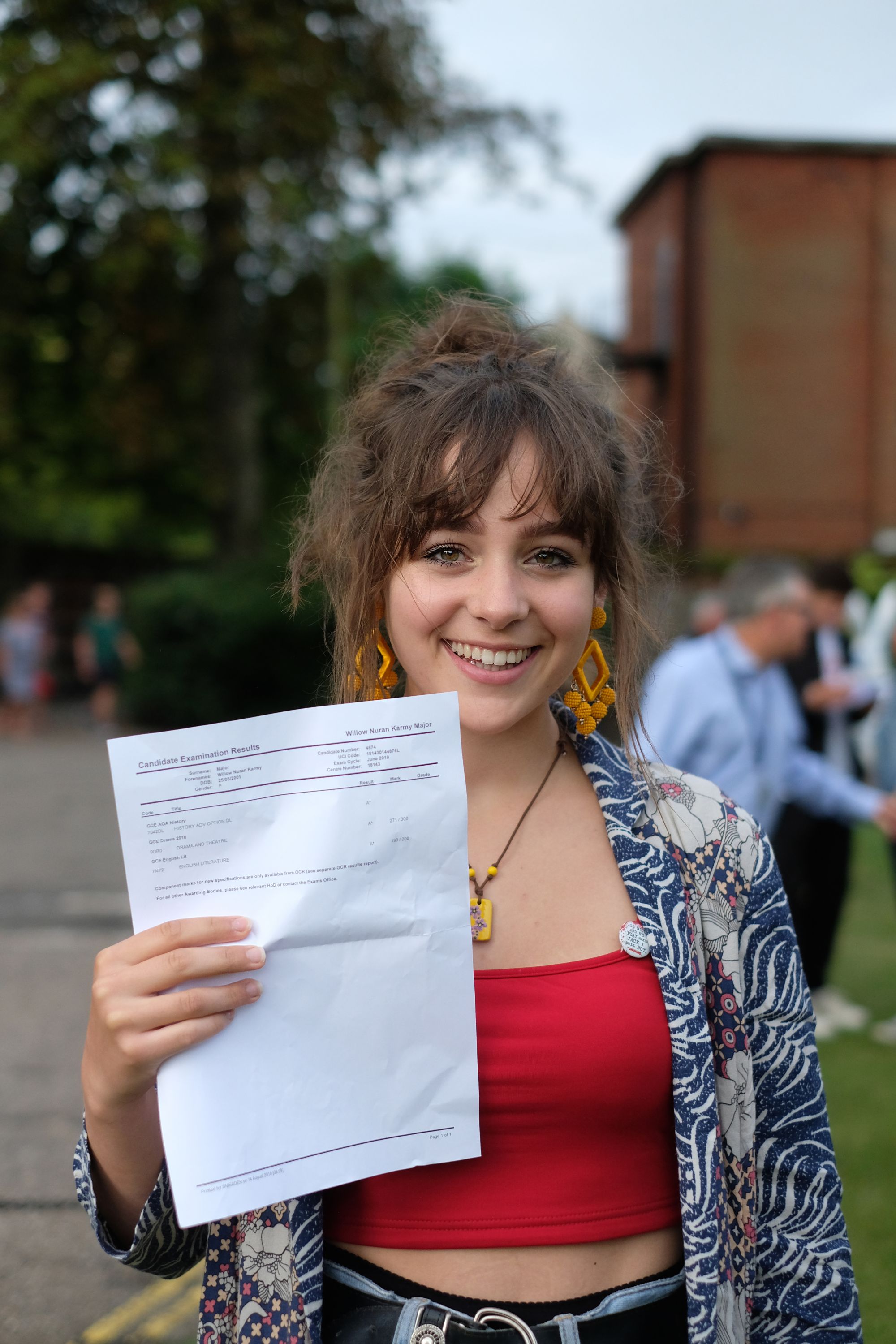 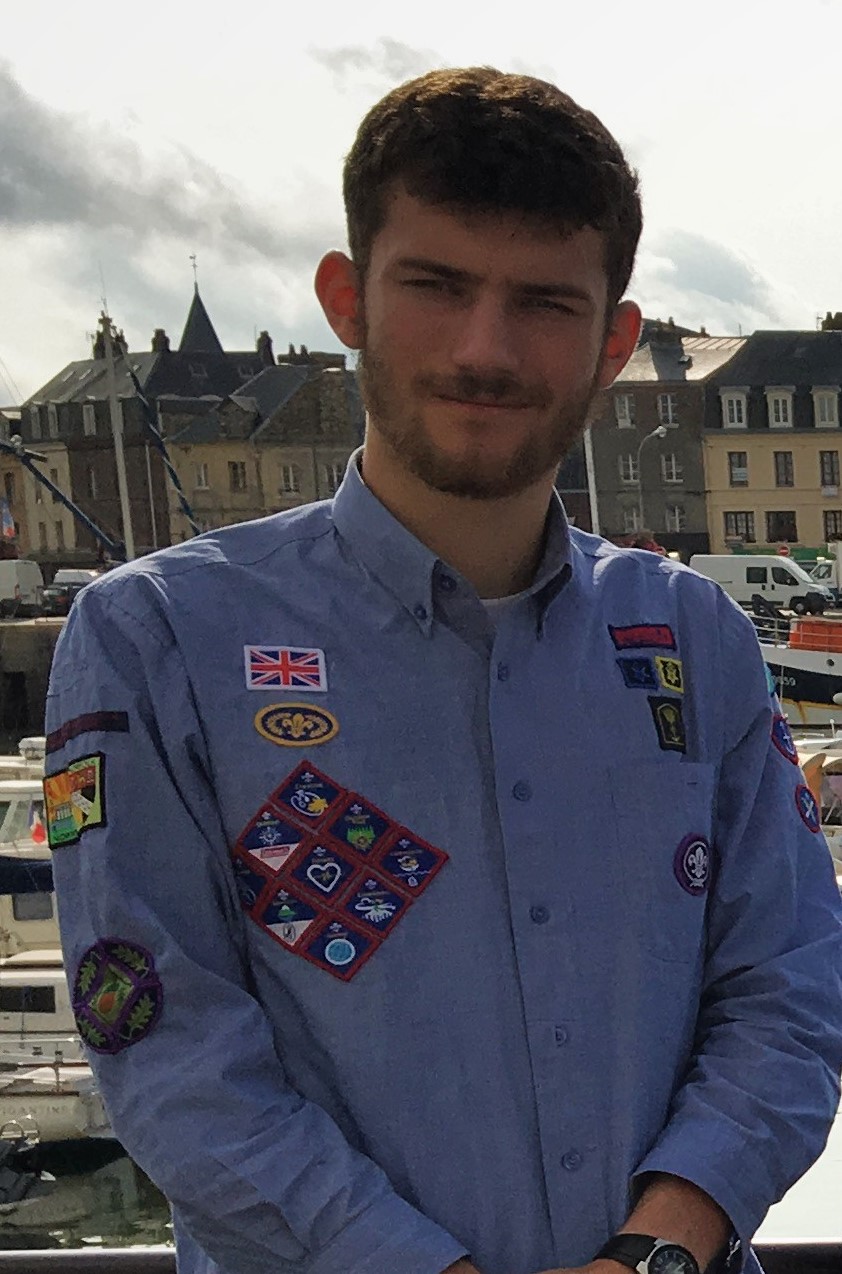 Willow Major (above) has collected 3A*s and will go on to study English Literature at Manchester. Willow has been involved in many dramatic productions throughout her time at Norwich School. She is grateful for all the opportunities and was keen to acknowledge the support that is offered. “The pastoral care system has been hugely helpful for me. There was always someone to speak to if I needed to”.

Harry Peachment (above) is going to study Natural Sciences at Durham, after collecting 3A*s. “I have been at the school 11 years,” he said. It has been an instrumental part of my life and there have been so many development opportunities.” Harry has been very involved with the Scouts since he joined the school and earlier this year, he was awarded the most prestigious award in scouting, the Queen Scout Award, the highest youth award achievable in the scouting movement in the Commonwealth.

Nieve Gauvain will study Psychology at Durham after celebrating 3A*s. She was very involved in the film club during her time at the school and is thankful for the extra-curricular opportunities. “The teachers have been amazing she said. They always go the extra mile and were happy to give additional help to individuals if required and wanted.” 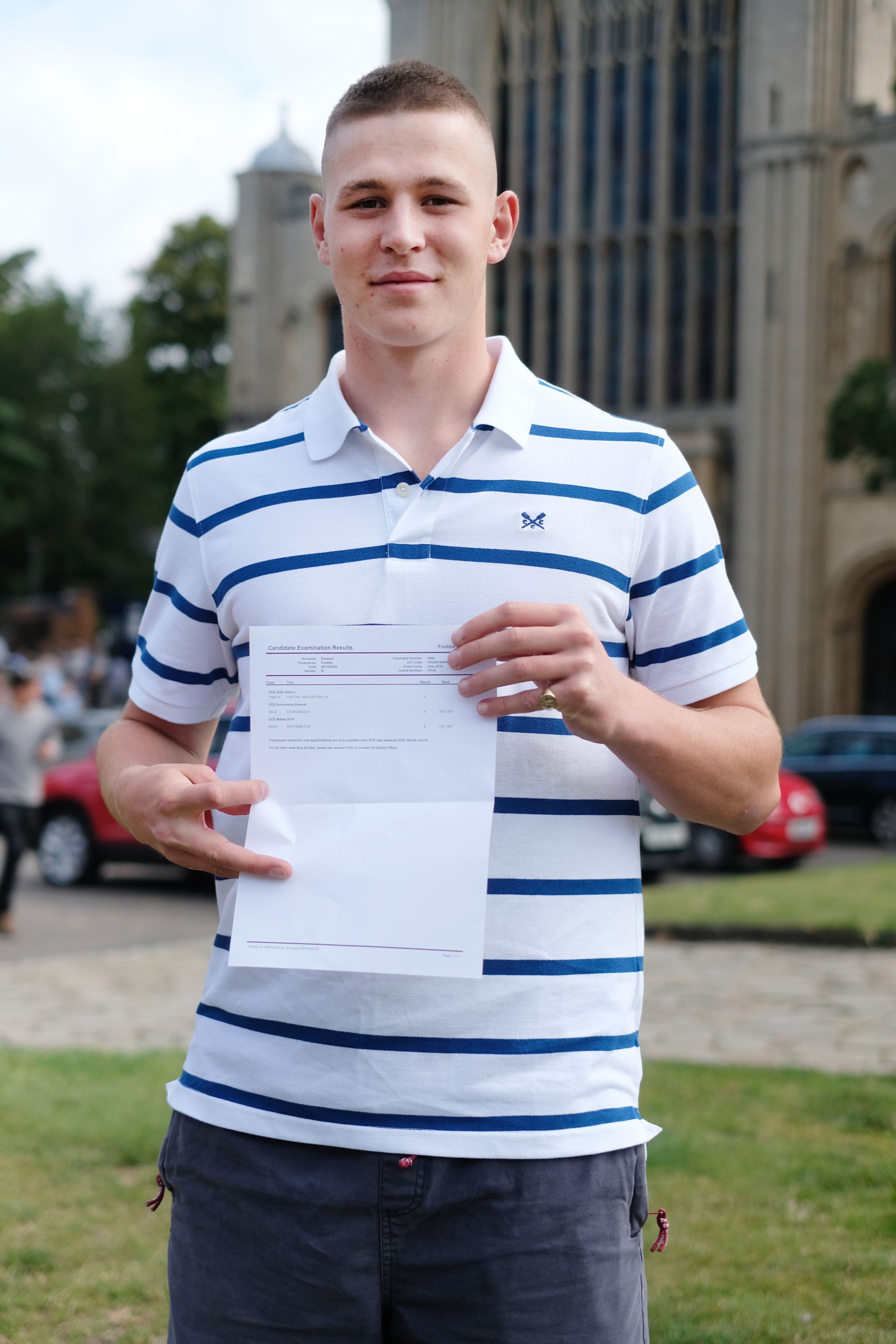 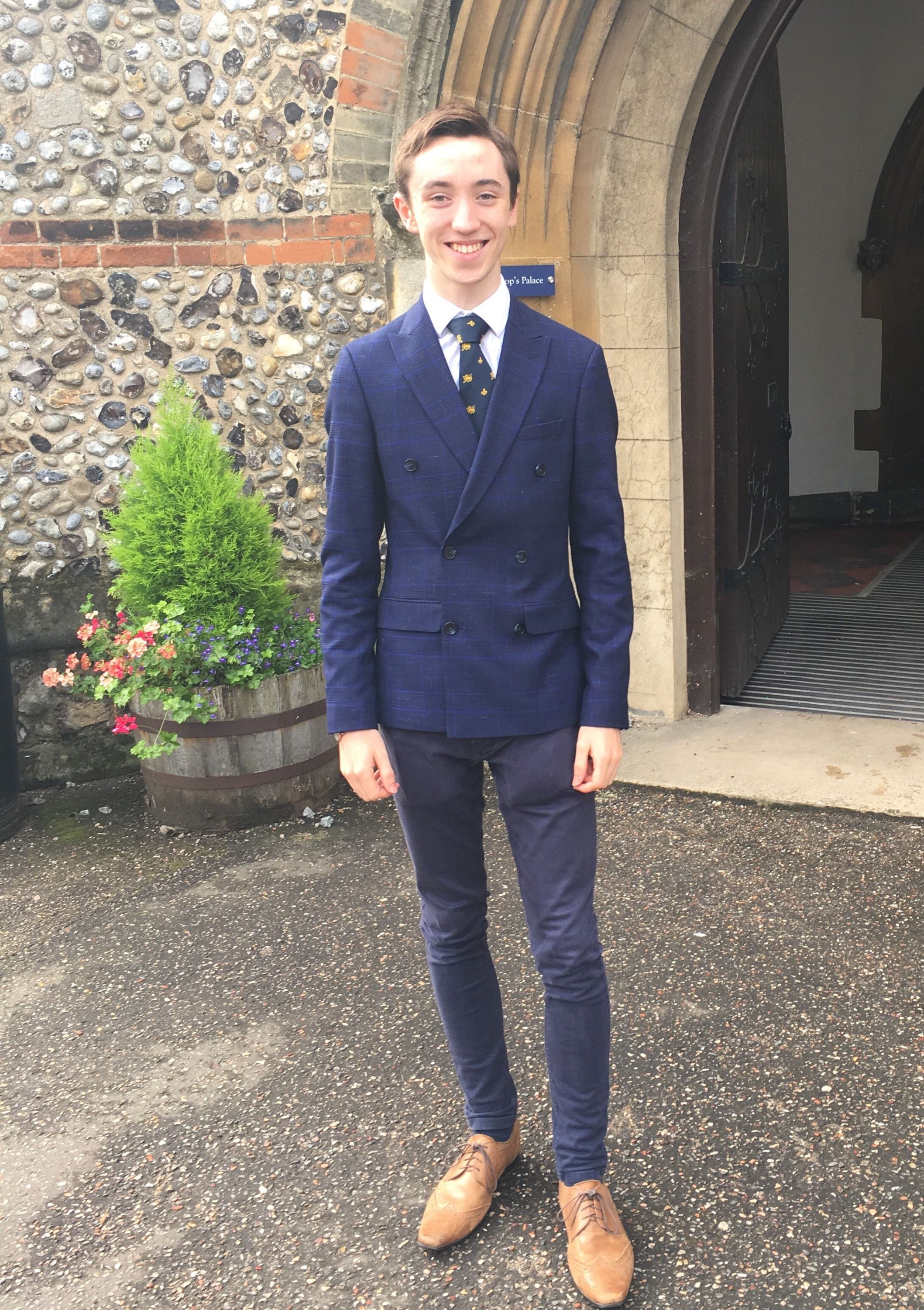 Steven Denby (above right) has got the results that he needed to go and study medicine at Bristol. The good news comes in the same year that he became National Orienteering Champion at the British Schools Championship. “The opportunities offered by the school have been great,” he says. “I was introduced to the sport in my first few weeks at the school and I hope to continue it at Bristol. In recent years, I have also been involved in the choir and the Barbershop quartet. There was so much to do alongside my studies.”

Freddie Steward (above left) picked up AAB grades and will go on to study at Loughborough University. Freddie juggled his A level studies whilst also making the regular trip to Leicester to play in the Leicester Tigers Rugby Academy. In March he signed a professional contract for the club. “Both the school and Leicester Tigers were really supportive. After weeks of revision, I am now back at pre-season training and looking forward to continuing the rugby whilst studying at university.” 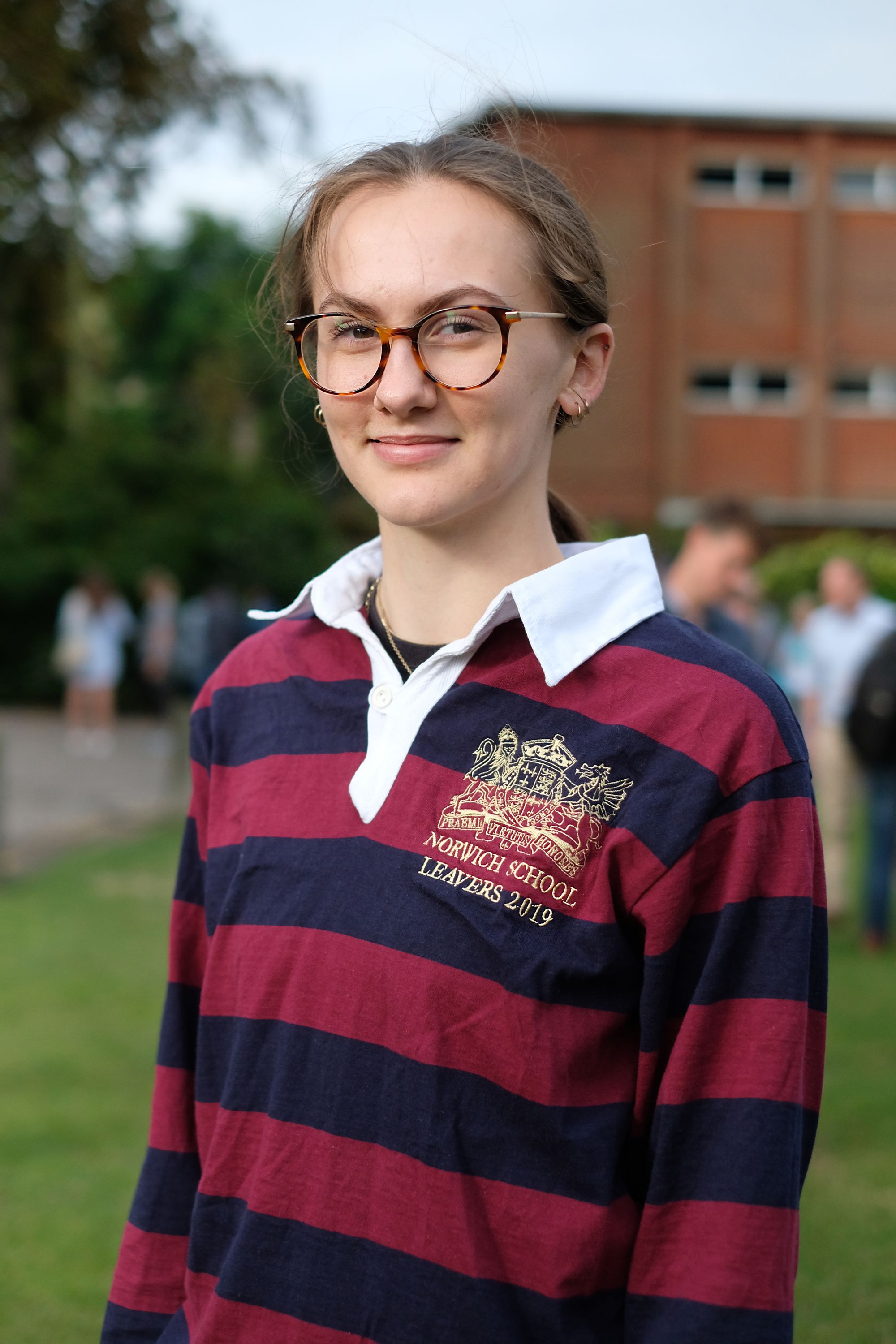 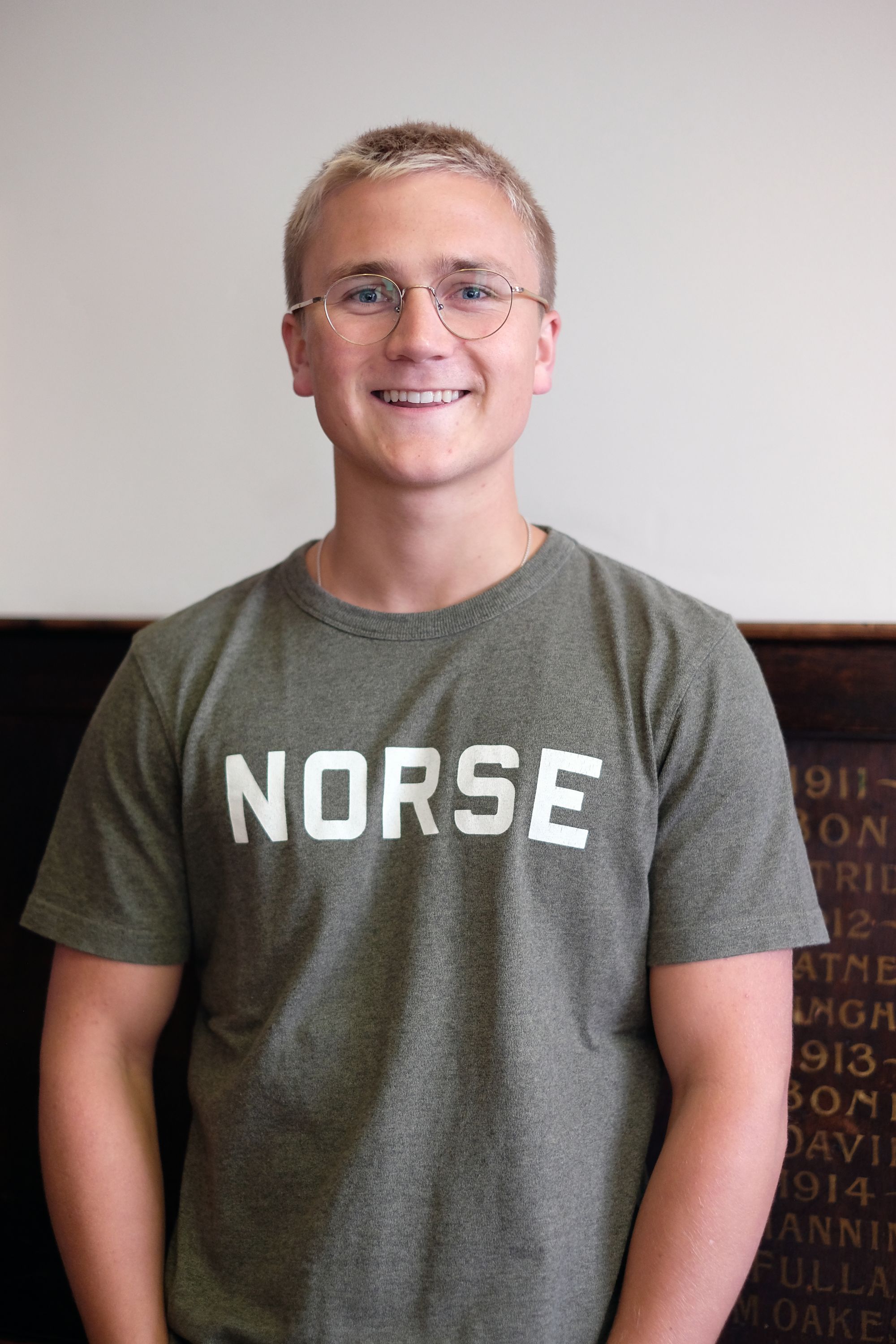 Eleanor Perkins (above left) has got 2A and an A*, which is what she needed to study Eco and Environmental Science at Edinburgh. She was of the first girls to join in the Lower School when we went co-ed back in 2010. Eleanor was in the U19 netball team which made the Nationals this year, a feat which she also achieved when she was in the U11 team in the final year of the Lower School. The opportunities that she had during her time at Norwich School have helped with her career choice. “Being a member of  the Natural History Club when I was younger and being able to experience Madagascar on a trip last year were big influences on what I have decided to go on and study,” she said

Ed Parkinson (above right) is celebrating 3A*s. Alongside such a fantastic academic achievement, Ed has been very involved in school life, with a leadership role as Head of House for Seagrim in his final year and also a keen Rugby Player. “I’m over the moon. When I looked at my results, I was speechless, it’s a massive relief. It’s a great way to top off my last 11 years at Norwich School,” he says.