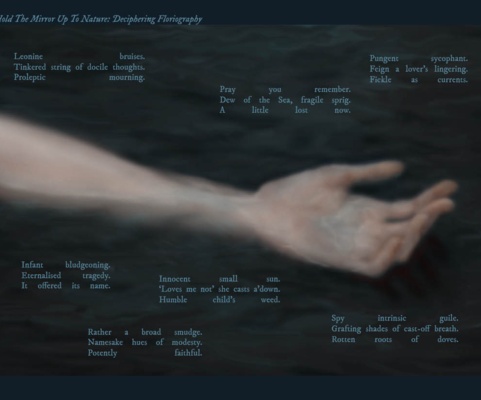 As part of the New Writing Festival 2020, pupils had the privilege of taking part workshops from ON Daisy Campbell, Piers Harrison-Reid, Laura Scott, Richard Lambert and Cara Marks. These were on a range of topics from performance poetry to writing about wild beasts and other animals.

In each workshop, the presenter talked through different techniques and showed example works. Pupils were then given time to write their own pieces.

Below are some of the works produced:

Those smudges of silver

Left in the small crinkles in your fingers

Are the remnants of

Pressed by a mere rock

Stripped off its creator to remove the dignity

And those spindly lines

Dangle off the black smudge

With this tiny shape’s

Feelings of disquiet and excitement in my stomach,

Butterflies flapping frantically as the qualms grew and grew.

The creature takes a cautious step forward. She keeps her head down as she creeps towards the water. With her white fur-coat slung over her back, the snow crunches softly under her paws. She hears the loud grunting of the male bear who prowls the edge of the ice sheet. Trying to go unnoticed, she tentatively walks around the other bear. Despite her efforts, the bear pounds up to her, nuzzling her mane. She carries on, ignoring him. He growls at her, disappointed and irritated by the response. She nudges him and pushes him away. He roars at her reproach. He bellows as he balances on his two hind legs. He throws himself at her, knocking her to the ground. She whimpers and edges away from him. He grunts a sad reply.

Climbing, creeping up the wall,

ensnaring everything in its path.

The colour green swirls in my mind,

Meeting Arthur from ‘Merlin’ and seeing the young warlock himself,

Before waking up and realising that it isn’t real.

Yet gratitude that my mind let me experience such a wonderful thing.