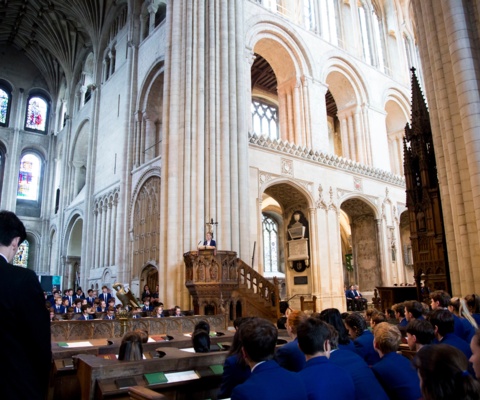 Mrs Wyndham and pupils Kitty Taylor and Gus Sanders gave an assembly on motivations to fundraise. Read on below to learn about their personal motivations and inspirations. 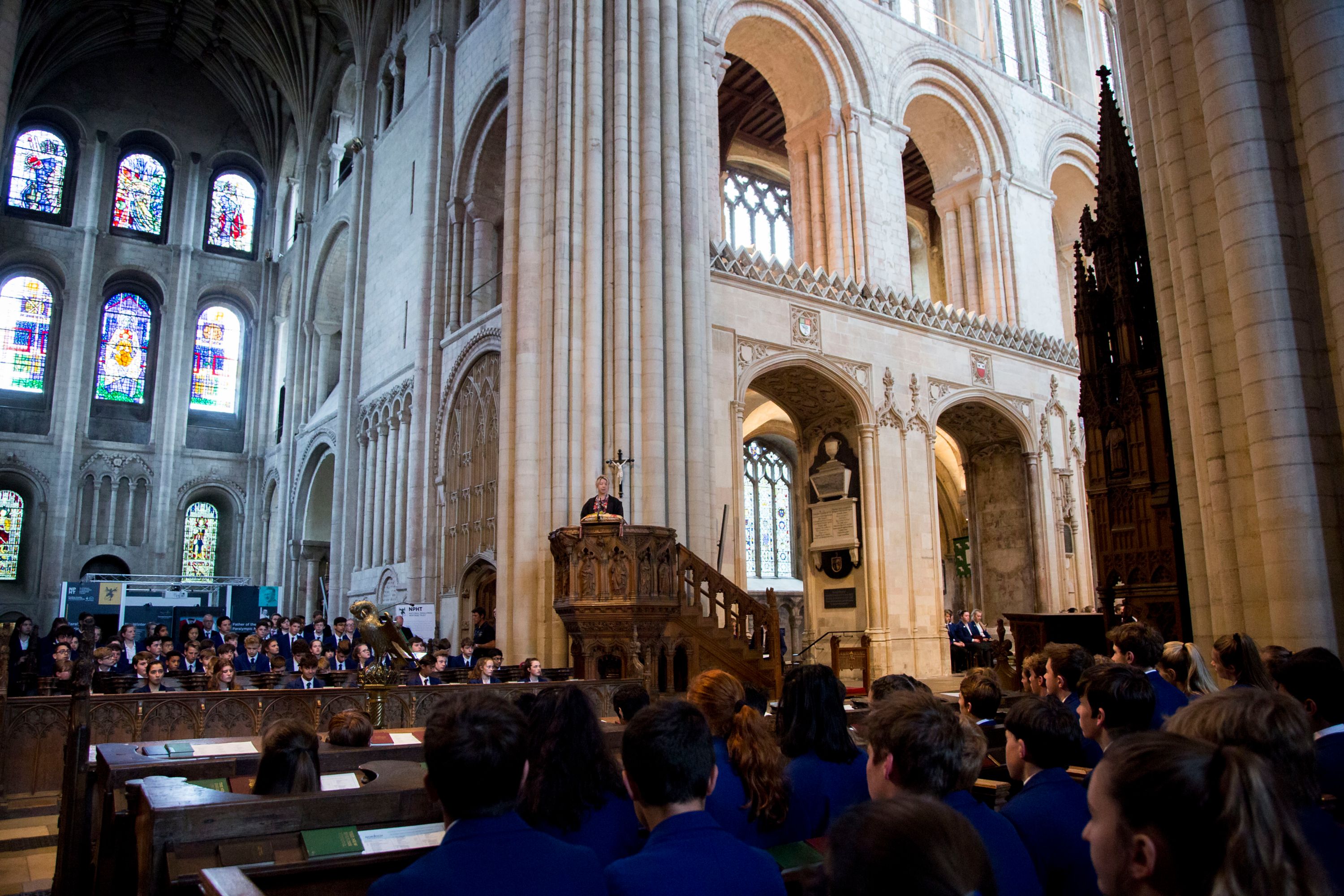 Whether you are inspired by an individual’s story, or have a particular charity you wish to support, fundraising can create opportunities for you not only to make a difference, but opportunities to undertake new experiences and events.

The great thing about charity work is that it's always testing the boundaries. No challenge is too hard, if it means helping those in need. You'll see yourself signing up to bungee jumps and half-marathons, as family and friends look on in disbelief. The greater the challenge, the greater the journey, the greater the reward – both in donations and from a personal standpoint.

In his book "Trajectory: 7 Career Strategies to Take You from Where You Are to Where You Want to Be," Walmart’s Senior Director of International Human Resources Strategy and Operations, David Van Rooy discusses how surviving in the moment and clinging to security only limits your opportunities in the future. To create a future career path and experiences that are fulfilling and creative, you need to break the norm and develop your skillset beyond the 4 walls of the classroom.  Fundraising and partaking in a challenge can help you get there.

'Helpers high' is a real thing. Knowing that you're making a difference to someone else's life, no matter how big or small, is incredibly rewarding. It makes you empathetic to the plight of others and creates friendships and new relationships with all different types of people.

Mr Todd has been a life-long advocate of fundraising and has completed 6 marathons and over 15 half –marathons.  He has raised over £12k over the years, with a total of £3,500 raised as part of the London Marathon this year.  Over the years he has raised approximately £20k.

Miss Middleton will be taking on a challenge very soon which has been on her ‘bucket list’ for a long time – a skydive!  She is raising money for Age UK Norwich, who as a charity work to help make life better for those in need, providing companionship, helping people maintain their independence and wellbeing in later life, or helping them learn how to use the latest technology. Her fundraising page can be found here: https://www.justgiving.com/fundraising/olivia-middleton-skydiving

Mrs Hill’s fundraising has taken her all over the world - she has completed the New York Marathon, Chicago Marathon to name a few and has raised an estimated total of £5,000 for a variety of charities.  This September she will be running the Berlin Marathon. Mrs Hill's fundraising page can be found here: https://www.justgiving.com/fundraising/nicola-stephenhill

Also, if you would like further details about fundraising and you have a particular challenge or charity in mind – please speak to myself for more information.

I would now like to introduce M5 pupils Kitty, followed by Gus – both are going to talk to you about their recent and current fundraising experiences – to hopefully get you thinking about future opportunities and how you may one day get involved. 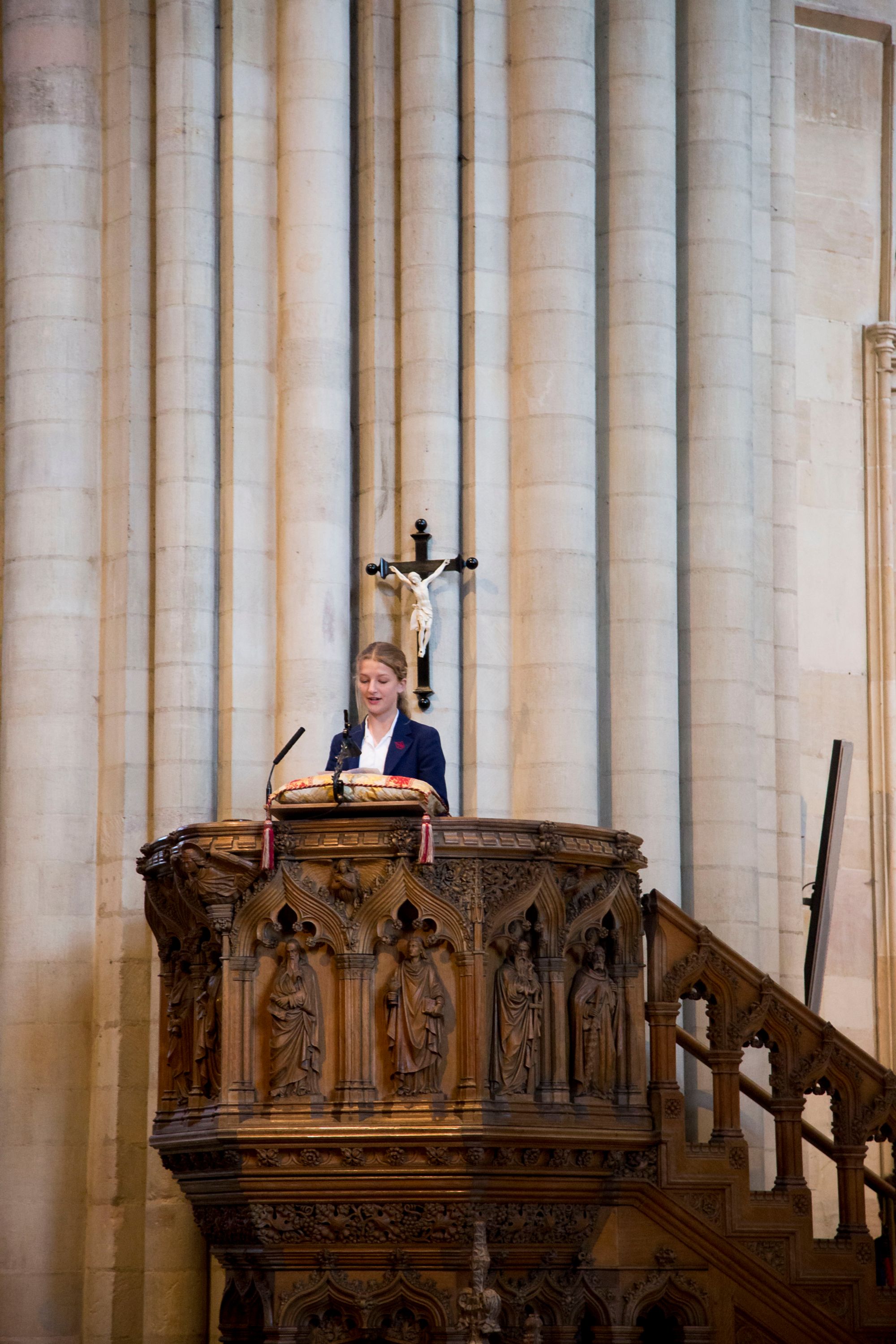 "As some of you may know I have been doing some fundraising for a trip to Madagascar this summer. During the Easter break I walked 50 miles along the North Norfolk coast, Hunstanton to Cromer; I was also collecting litter along the way. We stayed overnight at Burnham Deepdale backpackers and also at a friends in north Norfolk. The walk took a bit longer than expected as we had to go off course to pick up litter that we saw and also I had a cricket tournament interrupting one of the days. My mum and I walked the whole way in mostly high spirits apart from a few downpours of rain, numerous miles of shingle, and a couple of very heavy bags of rubbish and the unfortunate annoyance of the litter picker breaking after 1 hour so it was sore backs from then on. Over the 50 miles we collected 16 full bin bags of litter, we met some very kind people along the way who helpfully offered to recycle them for us.

The most shocking part for me was when we reached a beach area behind some groins which was coated in litter, the litter had been washed behind the groins during a tidal surge, and got stuck there. We found many foreign bottles and boxes as well as more than 25 plastic bottles. It was also saddening seeing so many wrappers, bottles, bags, cans and more along the final stretch into Cromer. I decided to do a litter pick walk because I feel with the constant increase of beach waste especially plastic it was fair that I should play my part to help with this major problem which is destroying the natural world. With the help of a blog of the walk and social media I hope to of raised awareness for plastic pollution and littering.

As well as raising awareness I did this to fundraise for a research trip to Madagascar that I am going on in the summer. Here I will spend time collecting important data for resident scientists both in the dry forest and also in the sea near nosy be island- this will help the Madagascan environment as well as the decreasing population of lemurs due to deforestation. The trip is through a company called operation Wallacea who help organize and lead research programs in countries such as Madagascar. As well as this being a research, geography and biology trip, it will also be an incredible experience to experience Madagascan culture, wildlife and partake in activities such as diving and data collecting. For fundraising along with the walk, I also organized a party with a friend and have done some busking with my guitar.

Experiences like this are once in a lifetime and I encourage anyone to step out of your comfort zone and embark on an adventure like this and there is so many effective and easy ways to fundraise." 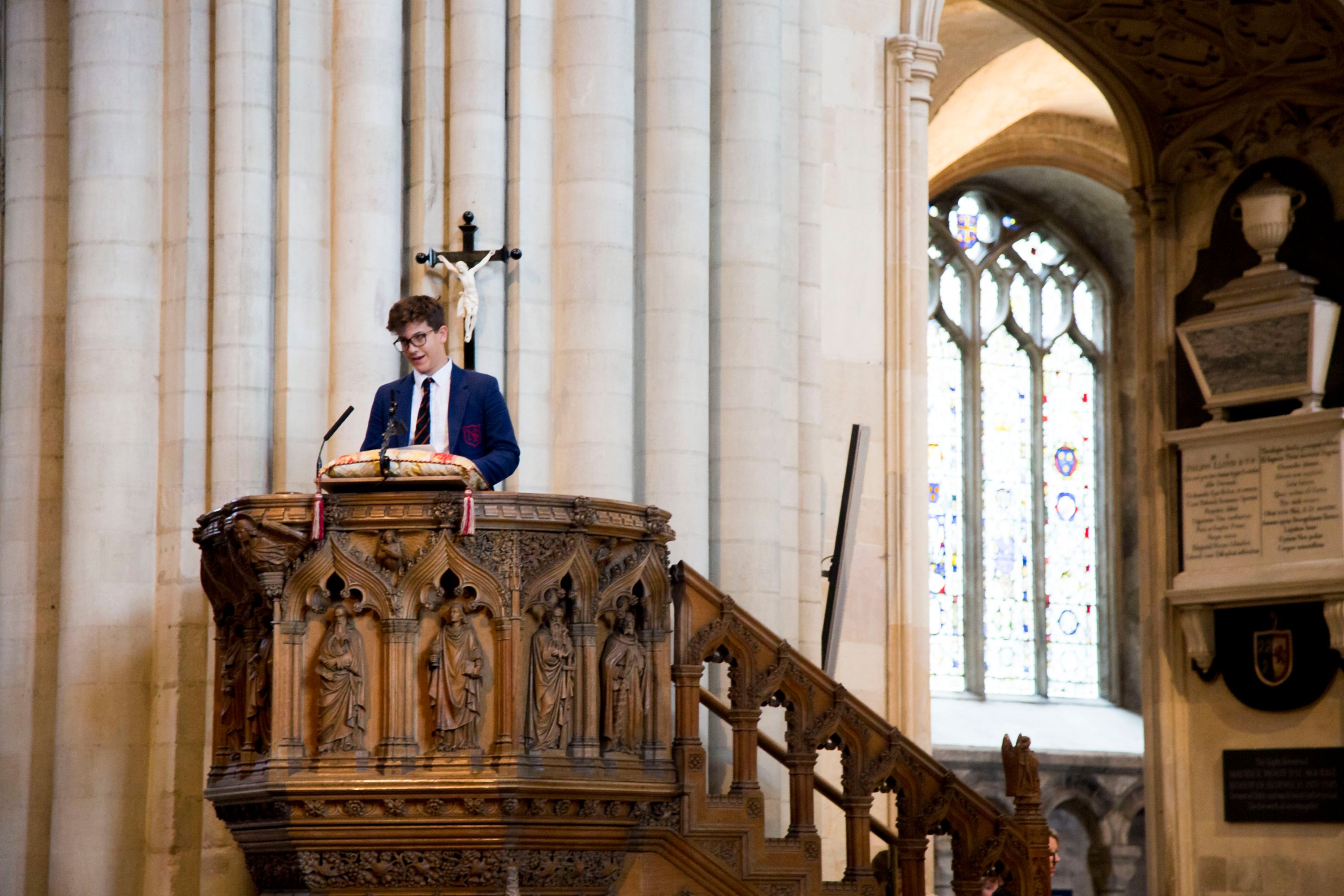 "In the summer of 2019 I, along with some other students are traveling to Peru for a month with camps international to help build facilities and help out with locals, like Borneo last year. In order to do this we are all fundraising in different ways but I am putting on a play. The play is called fantastic Mr Fox and involves around 30 L4-L5 pupils it is about a family of foxes and other woodland animals trying to outsmart 3 relatively stupid farmers, Boggis, Bunce and Bean, who want to kill them.

I decided to do this as one of the most enjoyable plays I have done was a Roald Dahl piece and I wanted to give that opportunity to others. I also do a lot of drama and wanted to see the other side and how the teacher must feel. I can now confidently say that is not easy controlling a group of 30 4th formers, my respect goes out for teachers here!

We’ve had half a term of rehearsals so far and they have been going great, I’m excited about going forward into next term when rehearsals get busier, and we get closer to the performance. It’s been really interesting to see how each cast member brings something different to their character that I would never have thought of! Yes the organisation has been hard, I think we have only had one rehearsal where everyone showed up who was meant to, so that hasn’t been easy but overall their commitment has shocked me and it’s been a great experience!

I will be raising money by selling fantastic Mr Fox merchandise such as Boggis’ donuts, Bean’s cider, character masks and donations on the doors. But none of it would have been possible without the support of Miss Adams, the drama department and everybody else in the school who has helped me get from an idea in September to this!

So on the 21st or 22nd of June please do come along to the Blake and see it, it’s going to be great!" 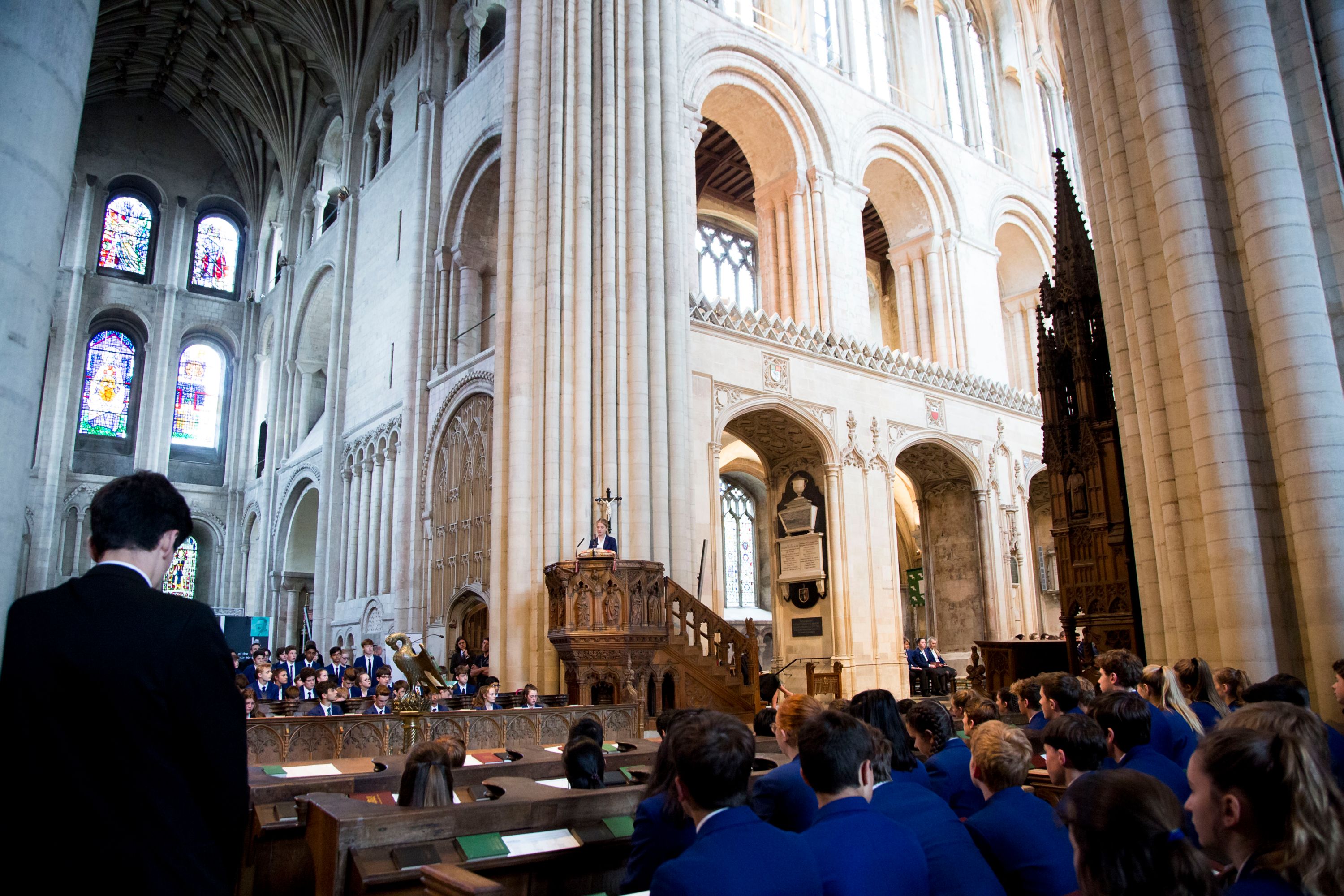