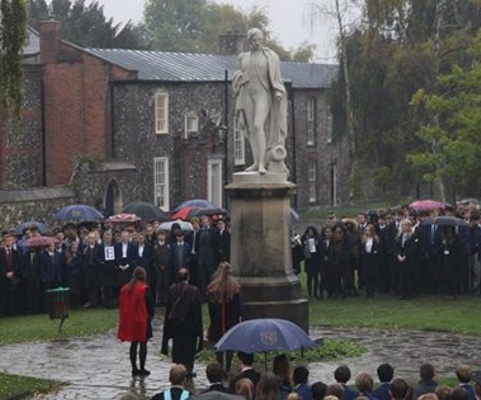 'England expects that every man will do his duty.' It was probably in the Autumn of 1766 that William and Horatio Nelson left home for the first time, to go to boarding school. Norwich must have seemed a long way from Burnham Thorpe as those small boys set off - 4 hours perhaps by pony and trap - with their clothes and a few other personal possessions packed in cabin-trunks. Mr Symonds, the High Master, would have met them at the front door of School House. And if their father, The Reverend Edmund Nelson had come to Norwich with them, he would have been received in the attractive Georgian parlour by Mr Symonds. The boys meanwhile would have been shown up to their dormitory, a long and cheerless room among the rafters on the less salubrious the top floor of the rickety old house. Other new boys would be there, and by the end of the day the full complement of perhaps sixty boarders would have arrived. They would all meet for the first time at the evening meal served in the Great Hall, and we can imagine the rather edgy conversations as new boys were sized up, and given advice, by their elders.

Lessons began at half-past-seven in the morning, and it would be with some nervousness that the Nelson brothers entered the large school room for the first time. The High Master's throne, at the top end of the room would be empty - he would not arrive until eight o'clock; but the Usher would be there sorting out the work for the day, and making sure that latecomers were lined up for a caning. The boys sat in rows along the sides of the school-room, facing each other, with a monitor at the head of each form. The Nelsons would have been placed among the lower forms, where there would be large chunks of Latin prose and verse to be learned by heart: older boys would begin to pull the texts apart and discover the rules of grammar and composition.

But there were recreations to look forward to, on Tuesday and Thursday afternoons, when Games of Camp Ball would be played on the rough pasture down by the river. In contrast there would be preparations for plays and other public performances that were advertised in the columns of the local newspapers.

We know from a letter written by William Nelson that the brothers were at Norwich School for about two years before they were moved on to the Paston Grammar School at North Walsham. Historians guess at the reasons: but it appears that while William Symonds was a remarkably inefficient High Master at Norwich; a new and charismatic Head, "Mathematical Jones", was attracting able pupils to Paston. If it was at North Walsham that Horatio Nelson picked up mathematical skills and strategies that were the foundation of his tremendous success at sea; it was perhaps at Norwich where the love for literature (and particularly the plays of Shakespeare) that comes out so clearly in his letters was first kindled.

We walk in Nelson's footsteps here at Norwich, particularly when we climb the stone stairs to the Chapel, which was the school-room in his day. His dormitory was on the top floor of School House, where smart Georgian windows have replaced the old dormers looking out onto the Upper Close. Like us, he played games on the Lower Close. And he queued for refectory at the old doorway by the School Office in the front hall. Two hundred years after Trafalgar we celebrate "The Immortal Memory", and take delight in knowing that Norwich School has its own unique part in the early life of Lord Nelson.