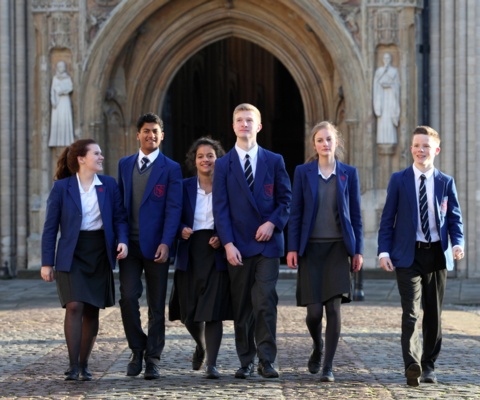 Prepare the way for the people.

Build up, build up the highway!

Raise a banner for the nations.

The Lord has made proclamation

to the ends of the earth:

See, his reward is with him,

and his recompense accompanies him."'

They will be called the Holy People,

the Redeemed of the Lord;

and you will be called Sought After,

the City No Longer Deserted.

'Pass through, pass through the gates!' These are the opening words of this morning's reading. The idea of passing through gates is an idea that comes up many times in the Bible, and this morning I want to give it some thought.

I'd like you to help me with this. Please stand up, turn round, and face the way you came in.

When you come into the cathedral in the morning, you walk through the West Door. It's a door unlike most others - indeed, it's more of a gate. I wonder if you've ever thought about why it's so big. Surely it doesn't need to be. Why are these doors so large?

I think to get to the answer, you have to realise that doors and gates like these are more than just a gap in the wall. They are there to tell you that you are passing into a different place.

When you walk through the West door in the morning, I wonder if you notice a subtle shift in your mood. You're no longer hurrying around in the wind and the weather. You pass into a place that says, hush - it's time to prepare for the day. Perhaps you feel a similar shift in your mood when you pass through one of the gates into the cathedral close in the morning. 'Ah, yes... I'm at school now.'

The ancient imagination understood very well the significance of gateways. The world of the Bible was marked out with gates. When you passed through the gates of a big city like Jerusalem, you knew you were both protected by its walls and subject to its laws. Your mood would shift as you went in. The temple of Jerusalem had a series of gates to remind people that this was not any old building you were walking into. Every gate you passed meant something.

Here at Norwich School we're lucky that we also have many fine gates and doorways. And they can still remind us that we're passing from one thing to another.

Some of you here today will be new pupils next term, and you are here to have a look round and get used to the school. I wonder how it feels to you as you pass through the Senior School gates. I hope you feel welcome, but I wouldn't be surprised if it also feels a little strange at first.

On Tuesday evening several pupils will go up the chapel steps and through what I'm told is the oldest door in Norwich on their way to their confirmation service. Perhaps the door will remind them that being confirmed is a significant rite of passage, a sign that they're now in a new place in their life and in their faith.

At the end of this term our school leavers will walk out of that west door for the last time. How will they feel when they do that?

I invite you to follow the Bible's example and be aware of the gates you're passing through and the thresholds you are crossing, because it will help you understand the stage you have got to. But there's a bit more. The Bible also shows us that when we step through a significant doorway, we can do so with God. That thought can be a real help - especially for the times when we don't know what's on the other side. Whatever gates you are passing through, I hope you all have a good day.

For our blessing, I'm going to ask you to stand and face the West Door once again.

Go forth into the world in peace;

be of good courage;

hold fast to that which is good;

love and serve the Lord. Amen.