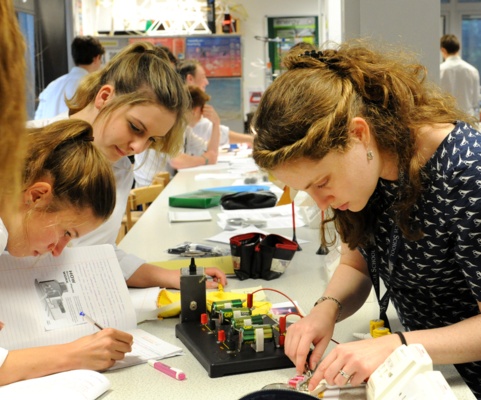 When I chose to study Further Maths and Physics at A-level and subsequently Physics at degree level, I suddenly found myself in male-dominated classes and lectures. Around 20% of my year group at University studying physics were female. I, somewhat naively, was not as perplexed by this as many people seemed to be. I chose Maths and Physics at A-level and beyond because they were my favourite subjects. If that happened to be true for more boys than girls then so be it. No big problem, surely.

Why have I started to become worried now then? Well some of the facts and statistics are startling and show that there are more powerful and subconscious influences on young people than I realised. Why does it matter? Because there is a huge loss of potential talent in any field where there is a large gender gap. For example, according to the president of the Royal Academy of Engineering, by 2022 we need another 1.8 million people in the UK to go into careers relating to STEM (science, technology, engineering and maths); and yet only 7% of engineering professionals are women. Solving the gender gap would solve the recruitment crisis. But the Institute of Physics has found that half of all state schools in the UK do not send a single girl on to study Physics at A-level.

There is absolutely no reason, cognitively, why these gender differences in subjects should exist. Subjects which are seen as having practitioners who are naturally brilliant statistically put off both female students and those from ethnic minorities. Of course there is no science to back up why a white male should be better at Physics or Engineering - the human race has not been around long enough for these differences to have evolved in terms of either gender or ethnicity. That said, MRI studies into the difference between the male and female brain do show up significant patterns. However, as Gina Rippon, professor of cognitive imaging at Aston University, says "The brain is much more plastic than the early neuroscientists ever dreamed, it is hugely permeable to society's influences. Life experiences can (literally) be brain-changing - and any talk of hardwiring is to misunderstand neural development. Until social factors are controlled for, it is impossible to say any differences are solely due to gender. Our brains reflect the society we live in."

Still unconvinced? Why should it be a particular problem in the UK then? There are huge differences between countries - Italy has always been much nearer parity in terms of gender in the sciences going back hundreds of years.

What are your personal decisions affected by? In terms of choosing subjects I hope you feel you can choose any subject based on how interesting you find it. Perhaps you have a particular career in mind too, although surely picking your favourite subjects will lead you on the path to a career you will enjoy. However, many of the influences on us are subconscious. Pictures of engineers in hard hats and on building sites do not give a realistic image of what many do day-to-day and may subconsciously put off many students. The idea that all physicists are geniuses like Einstein is likewise damaging - what would Physics be like if no one else bothered to study it as they could not be that good? If I have a son one day and they start talking to me about Psychology (a subject dominated by girls), will I be as interested and encouraging as when they tell me they love space and rockets? It doesn't mean I wouldn't be delighted for him to be a psychologist, but am I unwittingly giving him a different message?

So think twice about whether you are influenced by factors you did not realise would affect you when making decisions. And ask yourself: are you contributing to the existence of cultural stereotypes with careless comments? I bet we all are, it's too easily done. Have you laughed about how rubbish girls are at map reading? Or commented on how boys can't talk about feelings? Only by saying these things are we, as a society, making them true and in the process supressing and missing out on the full range of talents we have to offer one another.