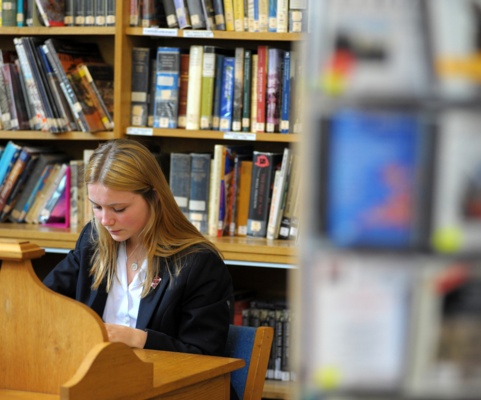 Take an innovative approach to exams Well, I wonder how they're going. Two days in and two to go. Did you ace the question on hydrocarbons? Did you beast your History essay on the causes of the Cold War? Did you crack those quadratic equations?

Obviously we hope they're going well, but however they're going, it is how you react to any slight setback that is more important at this stage. If you have misread a question, or had a bit of a blank, it's really not the end of the world. The crucial thing is to learn from your mistakes and to use the experience to feel more prepared next time.

If you did have a wobble in an exam, I wonder if any of you played the humour card.

Or in a Classics exam: (the Head Master will like this one)

Q 'What was one of the early Romans' greatest achievements?'

You can blame all those cooking programmes on TV for these:

A: 'salt, pepper, mustard and vinegar.'

Q: 'How can you delay milk getting sour?'

Q: 'Explain one of the processes by which water can be made safe to drink.'

In an English exam:

A: 'Benign is what you will be after you be eight.'

...Does that mean you're beten (beaten) next?

Of course, you've probably all heard of famous people who did not exactly cover themselves in glory while at school:

Bill Gates: Gates didn't seem like a shoe-in for success after dropping out of Harvard and starting a failed first business but he seems to be doing ok with Microsoft, current estimated value 230 billion dollars.

Albert Einstein: synonymous with genius? Not always, for he didn't speak until he was four and did not read until he was seven. Eventually, he was expelled from school and was refused admittance to the Zurich Polytechnic. Still, he caught on pretty well in the end.

Winston Churchill: struggled in school and failed his exams. He said, "Success is the ability to go from failure to failure without losing your enthusiasm."

Steven Spielberg: was rejected from the University of Southern California School of Theater, Film and Television three times. He eventually attended school at another location, only to drop out to become a director, a pretty successful one at that.

Michael Jordan: a man often lauded as the best basketball player of all time was actually dropped from his high school basketball team. Luckily, Jordan didn't let this setback stop him from playing, he says, "I have missed more than 9,000 shots in my career. I have lost almost 300 games. On 26 occasions I have been entrusted to take the game winning shot, and I missed. I have failed over and over and over again in my life. And that is why I succeed."

Closer to home, I wonder if you've ever thought about your own teachers' prowess in the exam room. It may surprise you to learn how many Maths GCSEs we've taken between us; Maths being a pre-requisite for taking a teacher training course even for non Mathematicians, some of us may have found it harder than others to achieve that requirement.

You might think that your teachers are reasonably organised; organisation is, after all, one of the top 5 qualities for a teacher; teaching encompasses so much that those who are unorganised will be overwhelmed and swallowed up. Yet imagine one highly organised current member of staff who, during their GCSEs, was in tracky bottoms and T-shirt at home and just easing themselves into a morning of revision ahead of their German exam the following day. Suddenly their Mum came into the room, shouting "German exam, now!" The school had just rung. Mad panic, scoop up uniform, dive into the car and change en route to school, just making it before the cut-off time.

There've also been some pretty spectacular exam failures along the way on the part of staff: 23% in Chemistry; 18% in Maths; getting a U grade (stands for unclassified so off the scale bad) not once but twice at O Level Physics; answering an impossible question on Charles I by writing a totally unrelated essay on the rise of Hitler (only 300 odd years out); or finally 7% in Latin, which prompted the teacher to write: "a pathetic effort which is a reflection of your utter indolence throughout the year," written with such force that the pen went right through the paper.

And before you all start playing the guessing game, the subject mentioned does not necessarily tally with the subject taught by a particular teacher.

If Thomas Edison had believed in failure... we would still be living in darkness. If Henry Ford had given up, we would still be riding on horseback...if Alexander Graham Bell had given in to the clutches of failure, we would be spending less time staring at those small screens we call phones that rule our lives (which might not be a bad thing!).

All these people understood that every failure encountered brings you one step closer to success, and that this is a natural part of the process. Some even enjoyed failure!

If you think about it, failure is just feedback; it's simply showing you what's not working so you can find out what will work. It's necessary and can't be avoided.

The process of learning from our mistakes is truly invaluable. And no one can excel if they are too afraid of making mistakes to try out something new.

So you see, good can come from bad. "There really is no success like failure."

As for my own exam howler: we used to have a general knowledge test when I was at school and in answer to the question, who wrote Handel's Water Music, I wrote ..... Mozart!

The good news is that you're nearly past the mid-way point in exam week. Good luck for the rest of your exams and enjoy the break.