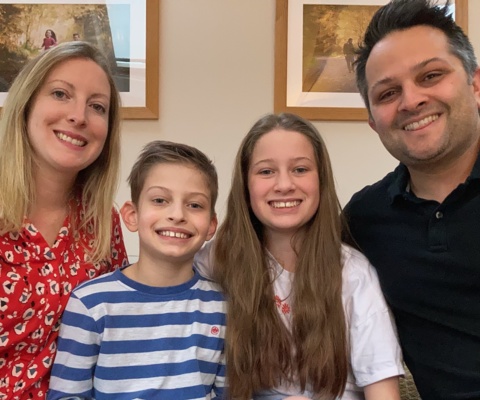 Starting at a new school can be an exciting but daunting experience. In our latest blog post, we speak to Ava Yassin, and her parents about her experience of joining us in Lower 4.

"I am Ava Yassin and I joined Norwich School from Filby Primary School in September this year. I found out about Norwich School from my parents and went to the first open day 2 years ago. I remember having a chat with Mrs Wood on that day about books! I love reading and so I love going to the school fiction library. My first day at Norwich School was the test day, which I found nerve-racking, but all the staff made it a lot easier with all of their kindness. Then was the activity day, which I found a fun day and a great experience to get to know the other possible Lower 4s.

After I received my letter, I was allocated ‘School’ as my House, Mr Grisewood as my Housemaster and Mr Flatt as my Tutor. I was sent optional work for over the holidays that was at a very good level for me. The ‘transition day’ to get to know my tutor group was fun and very enjoyable for the new pupils who, like me, had not been to the Lower School. Over the period of the next few weeks, I got to know my fellow classmates and teachers. The homework was sometimes challenging, but the teachers were always there to help.

Lessons are fun and I feel that I have learnt lots. The teachers are supportive and persevere on a task or skill until we all understand. The school has organised a few fun activities for tutor groups to take part in, such as Hautbois House: a fun activity centre which tutor groups took as a time to bond with each other. The Redmayne Run was an obstacle course at the Redmayne, which was great fun, even though my House came 5th. Then there was the rowing competition at Daynes, which was very interactive, even for the people who were waiting for their turns. The most recent was the Tutor Christmas Jumper competition, where the tutors strutted their stuff on the red carpet and School House won!

I have enjoyed Games especially as I have had the chance to play sports at different levels than I might have at my old school. Along with lessons there have been lots of opportunities to take part in activities such as Netball, Book club, and Lower 4 ensemble. There have been lots of Saturday morning activities such as Netball, Hockey, hockey skills, and HIIT workout.

So far, my experience at Norwich School has been fantastic and I cannot wait for next term."

"We had not really heard of Norwich School until our daughter, Ava, was around 6 years old. Our business had a trade stand at the East Anglian Game & Country fair and our pitch was next to the Norwich School stand, alongside many of the other private schools who were exhibiting. The event was split over a weekend and, across the two days, various existing pupils accompanied the staff to man the stand. I spent time talking with the children and witnessing their interaction with each other, their teachers and the general public. It was a cold, rainy and miserable weekend and yet not a single child let this dampen their spirits. Each talked enthusiastically and engagingly with anyone who showed an interest.

Afterwards, I went home, frozen, and stated to my wife that I wanted our children to go to Norwich School because I saw in those children the values that we felt were so important for our own children –  confidence, manners, politeness and acuity, to name but a few. One thing that we felt was important, and that I was so impressed to observe, was the ability to engage properly with adults and to talk to them with respect but also ‘on a level’ with them.

Ava, and her younger brother Noah, were fortunate enough to be at a lovely local village primary school and we felt no need to move them to the lower school, preferring to enrol them in Lower 4 (year 7).

Of course, putting two children through private education is a big financial commitment and we wanted to explore other options too before making our mind up. When it was Ava’s year to apply for high school, we came to the Norwich School open day, as well as attending two other state school open days, to allow us to compare and contrast fairly. We looked at all schools objectively and with an open mind and yet, in all areas, Norwich School stood out. The historic grades achieved speak for themselves but also pupils at the open day were more engaged, the teachers more enthusiastic, the curriculum wider and the extra-curricular activities far more varied. Our decision was made and everything we saw supported my initial impression.

Ava had always excelled academically at primary level however, in a school of just 80 children, it was very easy to be a ‘big fish in a small pond’ and we had no real way of knowing whether she would be up to the challenge of the entrance assessment for Norwich School. From the very first second that we arrived in the Cathedral Close for her first assessment day – the tests – it was clear that Ava was in this on her own. We dropped her off at the door where she was warmly welcomed by staff and told where to go, with no parents allowed beyond that point. We had expected to be able to spend a bit more time with her giving her a last pep talk but instead had a hasty hug and bid her good luck before scuttling off to spend the morning hoping that she was ok and worrying that we were making a mistake putting her under such pressure.

We need not have worried – Ava came out of the morning, despite around 3 hours of tests, quite buoyant and feeling that they had gone ok (you never really know do you?!). More importantly, she had formed a really positive impression already of the school and teachers, who she reported as being really kind and encouraging. Undoubtedly, entrance exams are daunting (perhaps more for parents than for children!) however, accordingly to Ava, the way in which they were conducted did not really make them feel particularly scary.

Day two of the assessments came around quite quickly and we had no idea what was in store for her. Our only advice was that she should be herself – if the school didn’t want her then it wasn’t the right place for her anyway. Again, we were instructed to drop her off at the school gate and watching her walk across the playground, alone, into a school hall full of people she did not know, filled us equally with pride and trepidation. Funnily enough, on the drive home when Ava was telling us about her day, my wife and I both shared a glance of resigned disappointment. She told us how the interview with a teacher was very relaxed and informal and, from some of the things Ava shared with us, we felt that this had perhaps caused her to be too candid and flippant in some of her responses. We remained hopeful but prepared for the fact that Ava may have to go to her second choice school.

When the letter arrived we decided that, as Ava had done all of the hard work, it should be her who opened it and shared the news with us. We told her we would be proud either way and crossed our fingers! We will never forget the smile on her face when she told us that she had been offered a place – she wanted it as much as us, having been excited by everything she saw during her various visits and having even made friends during the assessment days.

Getting ready for school was rather impacted by the Covid-19 pandemic. School transition days were cancelled and replaced by an online Zoom session where Ava was introduced to her form tutor, fellow pupils from her tutor group and her housemaster. They did a few ice-breaker exercises and were tasked with presenting some things about themselves. It was fun but no real replacement for the real thing. Ava was assigned two ‘buddies’ who were currently at the lower school and would be in her form in Lower 4. These buddies were simply asked to email Ava and introduce themselves. This quickly snowballed into phone calls and Zoom meetings, and the girls introduced Ava to other girls from the lower school. Over the summer, before Ava had even met with any of the children, she had had a virtual baking session with one girl, countless hours chatting with others and exchanged pictures of our family dog with goodness knows how many children! We even bumped into one of her tutor group the week before school started and, recognising her from the group chats, Ava was able to have a face-to-face chat with a new friend.

All of this meant that Ava’s first day was nowhere near as terrifying as perhaps it should have been. She loved it from the first moment and came home beaming. Far from feeling like an outsider, as we feared she might having not come up from the lower school with many of the others, Ava was welcomed as if she had known the others forever and has made great friends already.

Ava has definitely found the homework something new and she has to make sure that she keeps on top of it rather than letting it build up so that she can really relax on the weekends and unwind. That said, the homework is nowhere near as onerous as we thought it would be – she just has to make a little time to do it in the evening. She loves all the different subjects and is finding that, although she is a little behind some of the others on the hockey pitch, she is supported and encouraged amply to help her get up to par. Ava has really enjoyed trying some of the clubs and has found that, whatever her level of talent, she is always welcome to turn up and have a go. She has even joined the L4 ensemble band despite not playing an instrument (a simple drum beat can still make you feel part of the band)!

That’s not to say that everything has been perfect – there are always niggles and teething problems in any environment where children are given independence and responsibility for their decisions but that is human nature and we believe it is important that children learn from a young age to cope with all manner of situations and different types of people. Overall, we have not been disappointed with our decision and can’t wait for Noah to join in 2022."