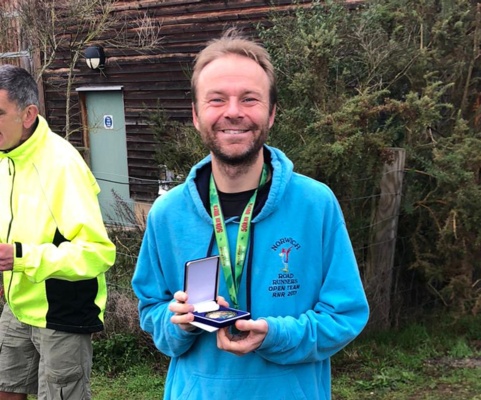 "Start thinking about your three targets for 2020 now. They need to be ambitious, almost unachievable."

Mr Hudson, Head of Cross Country Club and Mmathsteacher at Norwich School, recently won a 50km ultra-marathon event and followed it with coming 10th in the East Coast 10km the day after. Read his blog post below to find out about how he trained for the events and how to set your own goals for 2020.

"Inspired by some of the recent race reports from other Roadrunners of late, I thought I’d share a few thoughts about King’s Forest 50k and my season more generally.

King’s Forest was my third ultra and shorter than Peddars Way or the Coastal 100km so I was feeling pretty confident about finishing it. The conditions were great, drizzling and cool, and the course was well marked. I started off conservatively, letting a group of about 7 runners go away from me on the first 13-mile loop and got to halfway feeling like I’d held back and was full of beans. I’ve learnt on ultras that it’s all about holding back and keeping your powder dry for the first two-thirds of the race. Getting great support from my family and from brilliant marshals like Wendy Smith on the route, I set about upping my pace and picking people off in the second half. I was running about 6:30/mile when I went past the leader with about 6 miles still to go and I saw him look at my number, clock that I was in the ultra and visibly groan with disappointment as he realised he wouldn’t be able to hang on. This made me feel even stronger and I ran the rest of the race with a massive imbecilic grin on my face!

The KF 50k was the third in a series of Ultras organised by Positive Steps, following on from Peddars Way 48 miles and the Norfolk Coastal 100km. I would thoroughly recommend this series if you're thinking of giving Ultras a try. At the start of the year, I decided to complete the series. It was one of three targets I set myself for 2019: (1) Complete 3 ultras, (2) Run a sub 17min 5km and (3) Run a sub 2:45 marathon. I have achieved the first two, not the third (although I’ll have another shot at that in a few weeks). I say this not to blow my own trumpet, I’m well aware there are countless better runners out there, but just to share the power of setting yourself ambitious targets and putting everything into achieving them.

If I had one recommendation for runners it would be to write down at the start of the year three things you want to achieve in running, pin them up somewhere you can see them every day and train your heart out trying to reach them. Other things that have helped me improve include the plank (a few minutes every day); motivational Youtube videos (Ben Parkes anyone?); chia seeds in my porridge and the inspiration of Roadrunners like Mandy Foyster achieving amazing things every other weekend. The single most important factor, I have found, is running volume. Increase your mileage (steadily, safely and consistently) and you’ll see improvements in every aspect of your running.

My advice (for what it’s worth): start thinking about your three targets for 2020 now. They need to be ambitious, almost unachievable. Then set about achieving them."