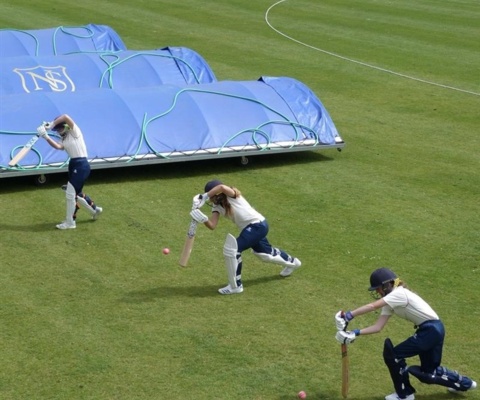 Spotlight On: Girls Cricket by Tilda Hill (U5)

U5 pupil Tilda has been playing cricket for many years and made her 1st XI debut this season. In this blog, she reflects on their latest season and why it's important that cricket isn't just seen as a sport for boys.

"I have been playing cricket at Norwich School ever since it was introduced as a girls' sport when I moved up into Year 6. Initially, when we began cricket and moved away from playing rounders, a great number of the girls had a reluctancy to join in with cricket due to it being generally labelled a ‘boys' sport’. However, from my very first session, to my most recent session in Year 11, all the staff here at school have made it feel as if there is nothing stopping girls playing cricket, how much potential there is and how exciting it really can be. Most importantly, they have encouraged us to be ambitious and not fear failure; you lose to learn.

I made my debut for the Girls 1st XI cricket team this season which was very exciting! Summer term began with multiple pre-season sessions, where everybody quickly jumped back into the flow of the basics and bonded as a completely new team. This year we have a very varied team in terms of age, our youngest player being Ellie Rowley (L4P) who’s a super talented bowler and is only year 7, and oldest, Liv White (U6E), who has captained the team incredibly so far this season! Having such an ambitious and young team right now promises a bright future for girls’ cricket at Norwich School.

Not long after the term began, we travelled out to The Perse School for our first fixture. Despite having only had a few training sessions, everybody had a positive outlook and was raring to go. We fielded first, everybody bowled and fielded well, and we brought lots of energy out there with us. For many of the girls this was their first experience of a cricket game, and so it was very exciting. Unfortunately, this game didn’t go our way, as our batting performance fell a little short on runs – but this only meant we were even more driven and focused in training the following weeks to broaden our team understanding of batting basics, and a few specific shot drills. This was followed by a few more similar loss situations in our following three games against Greshams, Framlingham and Langley, where we were left to chase high scores. Despite the results not necessarily proving it, the team this year has brought everything they’ve got to each session and fixture, which is all we can ask for.

A few weeks later, after a lot of constructive training sessions focusing on all areas of the game, we were facing Greshams again. This time we were at home on the Lower Close ground, and batting first. The sun was out, and we were all feeling good. Livi Hill (U5P) and Sophie Bush (U5C) went out to open the batting, executing what we had focused on in training, getting us off to a promising start, with a comfortable run rate. We concluded the first innings with a comfortable 200/7, with a special mention to Sophie Bush for her impressive 83. Having set ourselves up nicely as a team, and now full of delicious match teas (thank you refectory staff!) we were determined to give it our all, hoping for our first victory. We went out as a strong fielding team, and restricted Greshams to 175/7, with another special mention to India Fox (L5B) for her three cleanly bowled wickets. Everybody was buzzing post-match, it felt like all our hard work in the weeks leading up to this game had all come together and paid off. A well-deserved win.

This season the team have shown ambition, courage, and lots of people have stepped outside of their comfort zones with confidence. Both Mr. Sims and Mr. Catchpole have both been incredibly supportive of everybody in the team and given us all opportunities to push our game mentality, physically and to enhance our understanding of cricket, they’re an inspiration to us all, and are both successfully pushing girls cricket at Norwich School to be the best it can be. We welcomed our new Head of Cricket, Mr. Wylie, this year, who has already shown he is eager to support and develop cricket for all here at school, using his great range of knowledge and understanding to do so.

From our first pre-season session I have witnessed the players around me improve in every single session, whether that be within bowling, batting, fielding, or game understanding. Personally, I have learnt so much, and have felt that what I’ve learnt has pushed my ability in both club and county cricket too. I have thoroughly enjoyed training with such a great bunch of people and always look forward to our fixtures. This season has really shown that despite Covid obstructing previous cricket opportunities and past seasons, girls’ cricket at Norwich School is on the rise, and has so much exciting future potential."