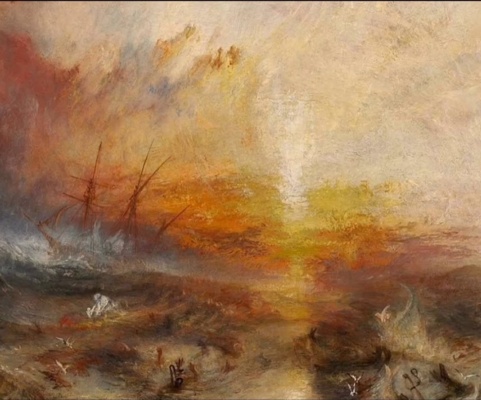 Spotlight on Art History: Ellie McKay in U6 responds to Turner's The Slave Ship

This week, the spotlight is on Art History, which is taught as an option in our Sixth Form. A level Art History develops pupils’ understanding of the relationship between society and art, art historical terms, concepts and issues, the influence of cultural, social and political factors as well as developments in materials, techniques and processes of both art and architecture over time. The course embraces both local perspectives and global scope; including artworks, buildings and artefacts from across time and the world.

In this blog post, U6 pupil Ellie Mckay responds to Turner's painting The Slave Ship.

"Studying Art History has given me the necessary techniques to analyse some of the paintings I am most interested in, in much greater detail than I previously could. One example is The Slave Ship, painted with oil on canvas in 1840 by J. M. W. Turner. As an artist famous for his depictions of light and colour, it is no wonder that Turner’s use of a vivid colour palette creates a beautiful sunset, which he masterfully reflects in the waves of the maritime landscape. His use of impasto (the thick layering of paint on the canvas surface) draws the viewer into the painting, suggesting the waves are coming out of the canvas and about to splash the viewer. The large, sweeping brushstrokes add to the dynamism and realism of the waves, and in them, it is possible to see the power of an approaching storm.

As an artist in the Romantic Period, Turner focused on the sublime. Sublime artworks combine beauty with brutality, in particular the power of nature and subsequent vulnerability of humans. As well as the storm, Turner paints slaves being thrown overboard a ship by their owner. He based his painting on a real ship, the Zong, which in 1781 missed a stop in Jamaica, resulting in dwindling supplies, disease and death. At the time, in order to claim the insurance for their lost slaves, the owners had to throw them overboard and claim they died at sea. Over 130 slaves were killed in this massacre on the Zong.

Turner (an abolitionist) painted The Slave Ship to make the public aware of the horrors of the Slave Trade. He coincided its exhibition with a meeting of the British Anti-Slavery Society. Although the slaves do not dominate the painting, they have been pushed to the front of the picture plane, so they cannot be overlooked. Their single, outstretched limbs ensure they are faceless and nameless, reminding the viewer that the Zong Massacre was not a stand-alone event, and that they could be anybody. In particular, I am drawn to the outstretched hands in the centre of the canvas. I want to be able to help those in the water and pull them out, as I’m sure many other viewers would want to do as well. However, it is just a painting, so I cannot. Turner makes the viewer want to help the slaves, telling them that although they cannot save the ones he painted, there are many more in the future who will need help (and can be helped, if the audience acts).

Overall, studying Art History has allowed me to see (and explore in further detail) the beautiful and brutal aspects of this painting, which is just as important today as it was in the 18th century. Although the slave trade has been abolished in Britain and America, recent events have shown us that racial inequality still exists. This painting reminds us that although there are many other things to focus on (which may be more beautiful), we cannot overlook the brutality of the past and the present, and we can still help those that need it, if we act now."