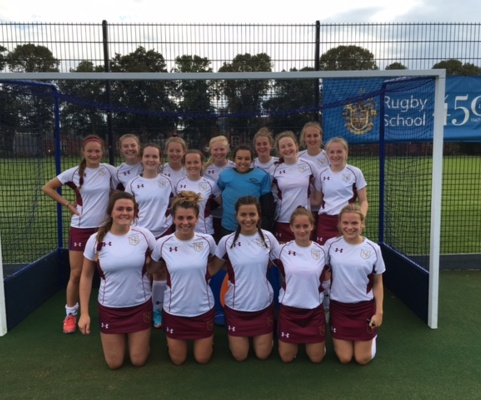 Setting Up The New Season

Ahead of the new season 1st XI Girls Hockey coach Rob Sorrell sat down with his captain, Lauren Rowe, and vice-captain, Aoife Lowe-Davies, to talk through their ambitions for the coming months. After a strong campaign last year, and having won the Rugby School Preseason Tournament Trophy scoring 23 goals and conceding just 1, the squad are clearly excited for the real competition to begin:

Question: Are you excited for the new season?

Lauren: Yes definitely, we have a lot of potential as a squad this season with lots of new talent to add to the experienced members of the team. I have confidence in every player in the squad and their abilities and I believe that we have a positive season ahead of us.

Aoife: Yes I am very excited for the season as our start has been so promising. Not only were there many positives that came out of our pre-season tournament but the team have already shown great enthusiasm in training. The younger players have got to know the team which allows us to now build further.

Q: Did you have a productive and enjoyable pre-season? What did you enjoy the most?

Aoife: With two intense training days and a tournament, the squad were prepared for a tough few days but we are now in a much better position than when we were before. In our tournament, we used what we had practiced in training in our matches which led to many successes, one being our goal scoring potential. However we did also come away with a lot to work on as we were aware that we weren't put under a huge amount of pressure defensively. We also spent a day in Cambridge which allowed the team to relax before the tournament. The most enjoyable part of pre-season was seeing our confidence grow as our success built on the pitch which was due to preparation in training.

Lauren: I think the team really benefitted from pre-season this year both on and off the pitch, with two full days of training, a team building day in Cambridge and a tournament at Rugby School. This allowed us to get many hours of practice in before the season started so we can hit the ground running when it comes to it, hopefully faster than our competitors. My favourite part of pre-season was the tournament at Rugby school because we played some brilliant hockey, and it showed we have so much potential to be a successful team this year. Q: As captains, what do you think makes a good 1st XI player?

Lauren: I believe a 1st XI player should be hard working, committed and passionate wanting to bring something to the 1st Team to make us the best team we can be. They need to understand the game, learn new tactics and strategies quickly and be able to put them into place on the pitch for us to gain the advantage. They should have the desire to train hard and improve their own skills and playing ability, whilst being resilient and wanting to win every time we step on the pitch to play a game.

Aoife: One of the most important attributes of a 1st XI player is commitment to training and the squad in general. Turning up to training sessions and then giving 100% comes from the players' determination to improve and be a better player than they are, which will then improve the performance of the whole team. A positive attitude on and off the pitch is also valued as this not only encourages the performance of the individual but also the players around them. This will give the team the want to win which I know isn't always achievable but it is always a goal. Lastly, something which some players can struggle with is aggression. Being aggressive on the pitch puts more pressure on the opposition and allows us to be more of a threat when we're attacking.

Q: Who do you believe your biggest rivals to be?

Aoife: Due to our disappointing result last year, I believe our biggest rivals are Langley. This season I feel we definitely have the potential to beat them and we will have had lots of practice before we play them.

Lauren: I think our biggest rivals this year will be Langley as their team has improved vastly in the past couple of years and are now starting to challenge us. After a tough game last season, we know this year will be a really exciting game for both teams and they are certainly going to test our capabilities. Q: How will you judge whether the season has been a success?

Lauren: This year we are competing in the East Schools League, the Investec National Schools Championship and the Independent Schools Hockey Cup for the first time. We will take each stage of the competitions one at a time making sure we set small achievable goals for ourselves. Obviously triumph in any or all of these competitions would make this season successful, but also improving our performance throughout the season and winning friendly fixtures will quantify a success.

Aoife: Winning matches isn't the only way we can judge success. Success can be judged by our performance as a team as we progress through the season. Working on set plays and improving our standard of hockey to where we want to be rather than comparing ourselves to other teams. We have a limited time to establish ourselves as a team so focusing on our own performance is important.

Q: Where lies your biggest challenge this year in order for you to achieve the team goals?

Lauren: I think our biggest challenge this year will be adapting our game depending on the matches we are playing, from full 70 minute games to tournament hockey, where we have limited game time to get the results we need to progress in the competition. The team will need knowledge of game management and tactics in order to be effective in doing this. In previous years, we have been successful in one or the other but if this year we can master both we will definitely have a successful season.

Aoife: I think our biggest challenge this year will be getting organised with our formation on the pitch in time for our important matches. This will come from players being able to understand and read the game to know what to do in different situations. Through practice in training and matches, I'm sure this will come very quickly to the team for us to achieve our goals.