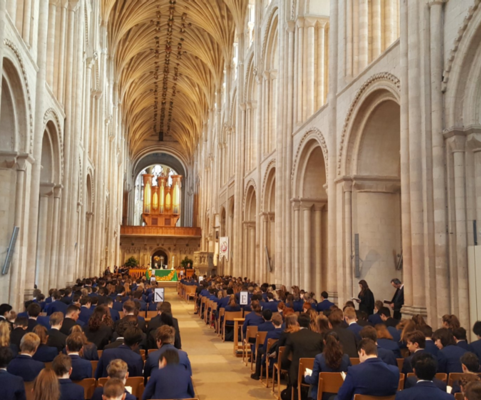 As told by Alex Mandilakis and Archie Nolan in Cathedral Assembly on February 6th 2018. We are not here to scare you, the internet has made the impossible possible and it is a tool that all of us will use to benefit our futures in one way or another, whether it's an online application to university, internet searches for a job at a prestigious company or the daily communications when in employment via email. However, we must remember the importance of monitoring our own behaviour online and taking responsibility for our actions in the same way we would if we did or said something to another person face to face.

Just last year in the USA 10 Harvard university students had their places terminated due to posting and sharing violent, racist and sexist memes in an online group. Memes are often light-hearted, used for banter and as an in-the-know way to communicate and feel part of a group. While they can be embraced for a harmless form of fun they also often veer into the harmful, cruel and violent. Take time to think before you share, what is the meme actually about? Do you really know what the meme is implying? Far too easily people are sharing content that is discriminatory and offensive. You are responsible for what you share, take a minute to think and consider if the comment you're writing or meme you're sharing is racist, sexist or unkind.

Ok, we have some questions and would like some honestly from you now. Can I ask everyone to stand up.

1. Remain standing if you have ever shared or comment on a meme

2. Sit down if you have never accepted a friend request from someone you haven't met

3. Stand up if you spend more than one hour a day using the internet

For an increasing number of people, the Internet is becoming more of a social outlet than the real world. Online gaming, chatting and social networking sites are replacing face-to-face interactions with others - often to the detriment of one's health. A new study by psychologists at Leeds University found that people who spend a lot of time online are more likely to show signs of depression.

Here at Norwich School we need to reiterate the importance of face to face interaction, too easily people are turning to their phones in break and lunch times. Take a moment to think, how long do you actually use your phone for each day? Are you using it for more than an hour a day, if so do you think this could be classed as addiction? Being able to recognise the negative impacts of overuse is important. In a recent survey 18% of young people stated that sometimes they cannot sleep because of worrying about things they have seen online.

Oxytocin known as the 'happy hormone' is released when you have physical contact and interaction with other people face to face. This hormone is not released when using the internet, hugging a friend or family member releases oxytocin, a hormone that we could all benefit from daily.

Have you ever noticed that you sleep better if you haven't used your phone directly before going to bed? Set yourself a challenge to turn your phone off or put it away before you get ready for bed, have some phone free time and allow your brain to switch off. The light emitted from phones tells your brain it is day time making it harder to go to sleep and ruining the quality of your sleep.

One area that is of concern is the use of multiple accounts online, do you have more than one Instagram account or more than one snapchat? If so, why? What are you hiding? Do you need to monitor which friends see which account?

There have been growing concerns with the number of pupils who are using the internet to glorify negative behaviours. Self-harming, eating disorders, racial discrimination and sexist remarks are all prevalent in the memes and online discussions between pupils in this and many other schools. This is something we all need to respond to by thinking before we post. Taking time to really consider what is being said and the impression it is giving others about you. Are you really that person? Are you racist? Are you sexist? Do you really want to encourage eating disorders and self-harm to others? Remember 'think before you post'.

It is all too easy to go along with something because it makes others laugh, true friendship isn't created on making another laugh, its built on respect. Others may laugh at the comments you make but does that mean they respect or like you?

A key message from today is that we ask you to 'think before you post'. Whether is it a photo of yourself that locates you as a Norwich School pupil, an unkind comment, the sharing of a prejudiced meme or even a sexualised photo, please take a moment to stop and think.

Have you ever written or sent something online and said 'don't screen shot it', if so why? Should you really have posted or sent something you wouldn't want others to see at a later date or show to their friend? Respecting your body and respecting others is key to maturity, consider how you would feel in a few years from now when you look back on your social media use. Would you be proud or a little embarrassed? It's never too late to change, make positive choices to protect your future.

Technology is advancing faster than we realise and apps exist for others to screen shot your snapchat without it telling you. Everything you post online is stored and kept somewhere, this could one day be shared or even used against you by a friend, partner or employer. The 'revenge' element of online behaviour is becoming prevalent, don't provide others with anything that could be used against you in any way.

Mr Cann produced a number of posters for around the school site in the run up to Internet Safety Day. A few of them can be found below.