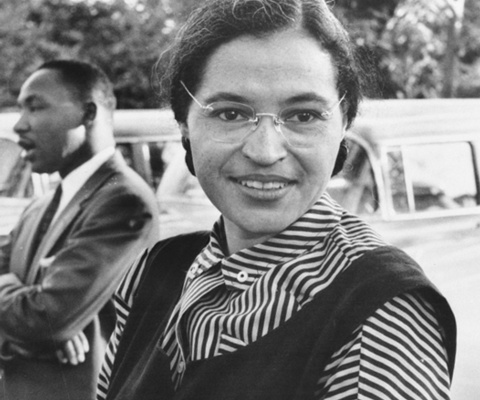 Continuing our series for Women's History Month looking at inspirational women throughout history, Imie James (M5) writes about Rosa Parks and her impact in the fight for civil rights in America.

One of the most inspirational women in history for me is the civil rights activist, Rosa Parks, the African-American woman, who one day decided that she could take no more. Rosa’s story and her legacy teaches us all much about the issues of diversity and inclusion.

Rosa was born in Alabama in 1913 and grew up in a harsh society dictated by the Jim Crow laws. This included segregation of white people from black people in public places, on buses and trains. After finishing work on 1st December 1955, Rosa boarded her bus home. Due to the Jim Crow bus laws, the front section of seats was reserved for white people only, and the back of the bus for the black customers. When the white section was full, black people were either asked to move to the back of the bus, stand or even leave the bus, regardless of the fact they had paid their fare. That afternoon, Rosa was sitting in an area where anyone could sit. When the bus became full, the white section was extended and Rosa was asked to give up her seat. Rather than move back, she moved from the aisle seat across to a window seat and declared that she wasn’t leaving. The bus driver gave her an ultimatum, if she didn’t get out of her seat, he would call the police. Rosa refused and so was arrested and subsequently charged for disorderly conduct and violating a local ordinance under the Chapter 6, Section 11 segregation law of the Montgomery City code. Following her arrest, the local community organised a boycott of all Montgomery buses. As the majority of those using buses were black, the bus company could not afford to lose seventy five percent of their passengers. As a result, the one-day boycott proved a major success, and continued for the next 381 days. Finally, the city authorities relented and the law on bus segregation was repealed. Recalling the incident later, Parks declared: "I only knew that, as I was being arrested, that it was the very last time that I would ever ride in humiliation of this kind...” By not giving up her seat, she had challenged the segregation laws in the South successfully. Despite the success of the bus boycott, Rosa was dismissed from her job. Eventually, she was hired as a secretary for John Conyers, an African-American US Representative. Here, she was able to get involved with work place issues, continuing to speak out about civil rights.

Rosa went on to become one of the foremost members of the Civil Rights organisation, travelling across the country and speaking out at events. When Rosa made the choice not to leave her seat on a segregated bus, her decision not only changed her life, but also the course of an entire nation. The courage and strength she demonstrated that day and throughout her life, in campaigning against racism, injustice and intolerance is truly inspirational, teaching us much about how an act of self -courage can make a difference and change the lives of many. You made the world a better place Rosa, we must never forget you and what you did! Indeed, as Rosa once said, “You must never be fearful about what you are doing when it is right.” It is up to us all to do so.