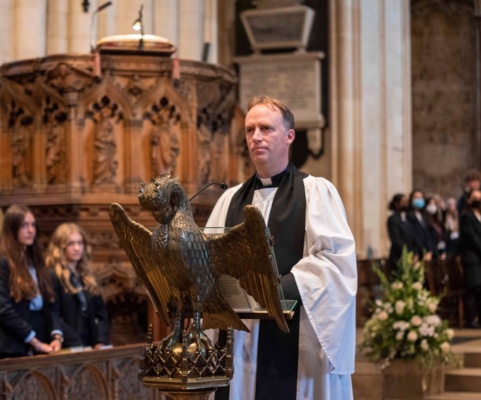 In this week's Friday Assembly, Rev Child addressed the school about how ancient examples from the Bible can have a very real application to life today.

To some who were confident of their own righteousness and looked down on everyone else, Jesus told this parable: ‘Two men went up to the temple to pray, one a Pharisee and the other a tax collector. The Pharisee stood by himself and prayed: “God, I thank you that I am not like other people – robbers, evildoers, adulterers – or even like this tax collector. I fast twice a week and give a tenth of all I get.” But the tax collector stood at a distance. He would not even look up to heaven, but beat his breast and said, “God, have mercy on me, a sinner.’ (Luke 18:9-13)

You’ll have noticed by now that cathedral assemblies on Fridays and other special occasions feature Bible readings. You might legitimately ask why that is. After all, even the newest parts of the Bible are getting on for 2000 years old. Isn’t a book that old getting out of date?

Recently you will have heard the line that at NS we are “21st-century heirs to an 11th-century tradition”. This is a new way we’re talking about our school identity; Mr Griffiths introduced the term with these words last week. You can think about the Bible in a similar way – it teaches ancient lessons that continue to be relevant today. We are 21st-century heirs to an ancient book.

How does this work? Well, let me take one specific example and show you what I mean. There are lots of studies going on at the moment about what people think of climate change. The British Social Attitudes survey found that around 93% of people in the UK believe that the climate is changing. There are actually very few climate-change deniers around. We agree that something is going on with the environment.

But there’s less agreement that it’s our fault. Another survey took a group of people who all believed in climate change and asked them whether they thought there is anything they can do about it. Around two-thirds said no, there isn’t. Similarly, when asked whether or not humans are responsible for climate change, about two-thirds said no, it’s to do with natural processes.

But that’s not what the IPCC says, the international group of climate scientists who are pooling their expertise on this issue. By their calculations, the rapid change in the climate is down to what humans are doing. Not just mostly, but pretty much entirely. Another survey in the US showed that people like the idea that technology can help us, and that other people should change their habits – but as soon as politicians suggest that we ourselves need to make sacrifices to save the planet, people stop voting for them. You can see that there’s an issue here – there is a problem with the way people are thinking.

Now let’s turn to the story of the Pharisee and the Tax Collector, our reading for this morning. Jesus tells this story, we’re told, “to some who were confident of their own righteousness and looked down on everyone else.” We’re introduced to the Pharisee – a high-status holy man – who addresses God in a loud voice, so that others can hear, commending himself for how good he is, and how different he is to the worst of society – like a greedy, thieving tax collector he spots cowering in the corner. In his head, there is nothing the Pharisee believes he needs to change about himself. It is more of a gloat than a prayer.

I wonder if you can see why I have put these modern climate change surveys alongside an ancient story from the Bible. There are connections across the centuries; first-century people are not so different from 21st-century people. We have always found it hard to admit responsibility; we shy away from making changes or sacrifices in the way we live.

This is why we still read the Bible today – because its ancient lessons have something urgent to teach us.

A prayer which is being used in the run-up to the climate change conference in Glasgow in November:

You sustain the earth and direct the nations.

and the cries of the poor;

Challenge us to change our lifestyles;

Foster within us a renewed vision of your purposes for your world. Amen.