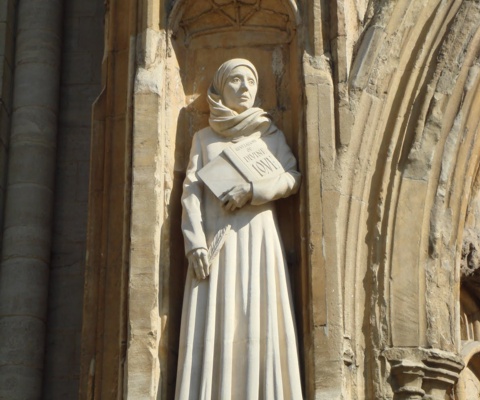 Rev Child Reflects on the Importance of Gentleness

In this week's Friday Assembly, Rev. Child reflects on the importance of gentleness.

Therefore, as God’s chosen people, holy and dearly loved, clothe yourselves with compassion, kindness, humility, gentleness and patience. Bear with each other and forgive one another if any of you has a grievance against someone. Forgive as the Lord forgave you. And over all these virtues put on love, which binds them all together in perfect unity. (Colossians 3:12-14)

As you came into school (depending on which gate you used to enter Cathedral Close) you walked past the Duke of Wellington or Horatio Nelson on the Upper Close. Then when you walked into the cathedral, you walked past two more at the West Doors, the statues of St Benedict and Mother Julian.

What are they doing there? Why have statues been carefully placed so you walk past them a lot? And what does someone have to do to get a statue made of them?

One reason for statues is they remember bold, influential people who embody ideals that we don’t want to forget. The statue of the Duke of Wellington, for instance, remembers someone who thwarted the threat of Napoleon at the battle of Waterloo, and upheld and protected his country. Wellington is a classic example of a military hero. A similar example is the familiar naval hero whose statue is right in front of the school he once attended.

But there are other statues around cathedral close that represent a different sort of hero. The two statues of Benedict and Julian were put in place quite recently, but they remember people who lived further back in history and who have been remembered for much longer. These statues are less about daring deeds, and more about people who had a steady, gentle, continuous influence. Both Julian and Benedict were humble, simple-living people, whose reputation came more gradually.

Here’s an experiment you can try with any statue: stand in front of it and notice what it feels like. To stand under the towering statue of Wellington is to be slightly overwhelmed by the soldier and statesman. Whereas I think Julian and Benedict whisper to us every time we walk past them, quietly reminding us of the importance of living well.

You may have heard Aesop’s fable of the North Wind and the Sun. Here’s a version of it:

The North Wind and the Sun had a quarrel about which of them was the stronger. While they were disputing, a traveller passed along the road wrapped in a cloak. "Let us agree," said the Sun, "that he is the stronger who can strip that traveller of his cloak." "Very well," growled the North Wind, and at once sent a cold, howling blast. With the first gust of wind the traveller immediately wrapped his cloak closely around him, and the harder the Wind blew, the tighter he held it to him. Then the Sun began to shine. At first his beams were gentle, and in the pleasant warmth after the bitter cold of the North Wind, the traveller unfastened his cloak and let it hang from his shoulders. The Sun's rays grew warmer and warmer. Very soon the traveller pulled off his cloak altogether. The moral of the story: gentleness and kind persuasion win where force and bluster fail.

We are wise if we know the importance of gentleness. Gentle people may not be the boldest or the most eye-catching, but that’s exactly their strength. We don’t feel threatened by gentle people, so we’re more likely to listen to them and be influenced by them.

This is what we mean when we sometimes talk about Jesus being a gentle person. This is why gentleness has long been a virtue in Christianity, and in world religions generally. And if I may speak particularly to the boys and the men listening to this: there is an old idea of being a gentle man, a gentleman, which I think is still a good idea. The world we live in today needs more gentle men, and it wouldn’t be a bad thing if that was our ambition for the future.

It’s always worth us examining who our heroes are. Perhaps it’s easier to be impressed by more aggressive, overbearing types – whether they’re celebrities or sports personalities or whatever. But we should make sure we don’t miss the quieter types, the people who radiate gentle warmth rather than stirring up a hurricane.

There have been certain notable things that have gone wrong in the world recently. The cases of George Floyd and Sarah Everard have brought to light many other examples of racism and everyday sexism. In a world like this, can I recommend gentleness as something we need to recover in the way we treat each other.

Or to put it another way – if someone was going to make a statue out of you, what would you like it to be for?