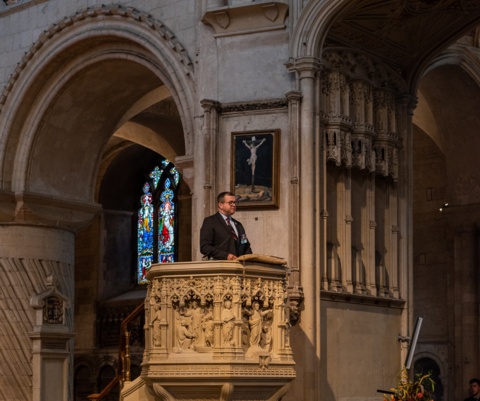 For Remembrance Day 2021, we welcomed guest speaker Wing Commander Steve Dean to address our community in the Cathedral as part of the Remembrance Day Service. You can read his address below:

"The weather in Normandy was not good on 6th June 1944, with rough seas and a grey overcast. At around 7:30 am Company Sergeant Major Stan Hollis of D Coy 6th Btn Green Howards was in the first wave of men to land on Gold Beach. By 11-o-clock, his unit had only advanced about half a kilometre when they were pinned-down by two machine guns defending the Mont Fleury artillery position.

The situation required decisive action. Hollis reached into his ammunition pouch for a grenade, and was furious at his own lack of preparation, when all he pulled out was his shaving brush and a pair of army socks rolled up into a ball. Needing to do something, he lobbed his socks at the enemy. The defending German soldiers mistook the ball of socks for a grenade arcing towards them and dived for cover. Seizing the moment, Hollis stood up and charged the defenders. By the time the rest of his men reached the gun emplacement, Hollis had single-handedly captured the position and taken prisoner around thirty enemy soldiers.

This was the first of two brave and selfless actions on D-Day for which Stan Hollis was awarded the Victoria Cross, the UK’s highest award for valour. Of the five VC’s awarded during the Normandy Campaign, his was the only one won on D-Day itself.

Headmaster, teachers, staff and pupils; good morning, and thank you for inviting me to come and speak to you today. I am Wg Cdr Steve Dean and this morning I want to tell you why I think remembrance is so important and remains relevant to us all today. To share with you some stories from my own experiences, and particularly my involvement building the British Normandy Memorial at Ver-sur-Mer in France.

So, why have I been asked to speak with you? First, I have a connection to your school, as I am the father of one ON and one current pupil. Next, is my military experience. I spent over 30 years as a fighter pilot in the Royal Air Force, deploying on 11 operational tours in Iraq and Afghanistan and flying over 150 combat missions. Since leaving the RAF, I have spent the last 4 years building a war Memorial in France to commemorate brave men and women who died during the D-Day landings and the Normandy campaign in the summer of 1944.

Remembrance honours all those who serve to defend us. It unites across faiths, cultures and backgrounds to remember the sacrifice of the Armed Forces community. We also think of the families and innocent civilians affected by conflict.

The traditions that we know today, and that you are part of this morning, started exactly 100 years ago this year, soon after the end of the First World War. Those traditions include the wearing of poppies, and the two minutes silence.

Giving thanks today remains as important as it ever was. In the 76 years since the end of the Second World War, there have only been two years in which no British service personnel were killed whilst on active duty. On the night of 22nd March 2003, my own dear friend, Flt Lt David Williams, died when his Tornado fighter jet was shot down by a missile over Iraq.

And so, we return to the beaches of Normandy. Operation Overlord, or D-Day as it is known, was the bold and very secret plan to invade Normandy to liberate Europe from Nazi occupation.

On the 6th June 1944, the allies landed over 156,000 troops in Normandy, of whom over 62,000 were British. Most came by sea, but many also arrived in gliders or were dropped by parachute. It might not be the largest invasion in military history, but it is definitely the most audacious and complex. Because the weather was so poor, Rommel, the General tasked with defending the French coast, was confident there would be no invasion, and returned to Germany to spend his birthday with his wife. The fighting was hard, but by the end of the 6th of June, the allies had established a bridgehead in mainland Europe. This was the beginning of the end of the Second World War.

The British Normandy Memorial commemorates those 22,442 men and women under direct British command who died during D-Day itself and the Normandy campaign which was fought over the next two months.

Despite the name, the British Normandy Memorial, there are actually men and women from 38 different nations named on the stone pillars. Many of these come from Commonwealth countries far across the globe, others come from nearer European neighbours who had been occupied by the Nazis.

The Memorial was the idea of Normandy veteran George Batts, who wanted to build a lasting monument to his colleagues. He wrote to the Prime Minister asking for funding and was successful. In addition to the money given by the Government, many thousands of individuals also made donations towards the construction of the Memorial. Harry Billinge a 95-year-old Normandy veteran raised over £40,000 by himself. One time, I even found him in his deck chair, fundraising, on the beach at Arromanches.

The British Normandy Memorial was formally opened to the public on 6th June this year. Because of the COVID restrictions, no veterans were able to travel from the UK for the event, but HM Ambassador to France laid a wreath; whilst the veterans watched live via satellite in the UK.

It sits in a commanding position high on a ridge above Gold beach, one of the five D-Day landing beaches. It focusses on a bronze sculpture of three soldiers. The soldiers are nearly 3m tall and each weigh over 400kg. They are surrounded on three sides by the walls of the Memorial Court rising up almost 8m high, and bearing quotes from the king and various political and military leaders. On this wall are also the names of the 1,475 soldiers, sailors and airmen who died on D-Day itself.

The scale of the site is huge. It covers over 22 hectares, almost twice the size of Redmayne for those of you who love the Redmayne Run. The central grassed area is about the size of two rugby pitches with paths cut to make it look like a Union Flag when viewed from the air. It is surrounded by 160 stone columns making up a pergola; and on these columns are the names of those who died from 7th June onwards. In all, over 4,700 tonnes of French limestone were used to build the memorial, very similar to the stone used to build this very cathedral.

It is very easy to get lost in big numbers, but each name on the memorial represents an individual with a unique story.

There are the names of four men who were only sixteen when they died – that is the same age as some of your Upper Five or Lower Six pupils.

Frederick Fitch and John Williams’ names are on the Memorial, they were both officers in the Royal Norfolk Regiment and also ONs who only a few years earlier might have been sitting where you are now.

The names of ONs Maj Frederick Fitch and Lt John Williams, both of the Royal Norfolk Regiment, are recorded on the Memorial

The British Normandy Memorial commemorates the men and women who died in one campaign in one conflict. Your roll of honour, read today by the Heads of House, remembers ONs who died in both World Wars.

Remembrance is an opportunity to say thank you, and to learn as we remember the service and sacrifice of so many who came from every walk of life and from every background in all conflicts, and reminds us that we must all strive to make a better and more peaceful future. So, wear your poppy with pride.

As for Stan Hollis and his lucky socks. Socks are one thing that we both have in common. I wore the same pair of lucky socks for every mission I flew during Gulf War 2 – and they brought me home safely."