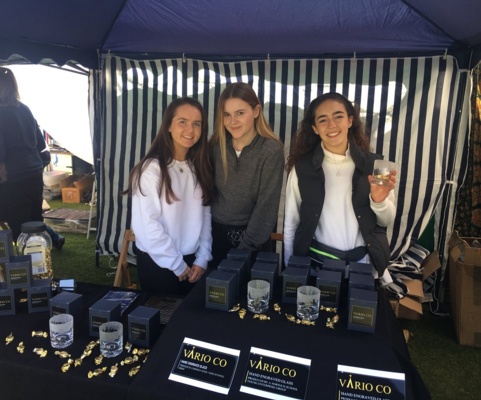 Every year the Lower Sixth are given the opportunity to partake in the young Enterprise competition. Young Enterprise sees thousands of Sixth Form pupils nation-wide creating businesses from scratch, with the aim to progress through country, regional, national, europeans, and ultimately international rounds in order to illustrate how viable their business is.

A really rewarding chance to experience all aspects of the business world and all the problems and benefits that accompany it, young enterprise is something i would recommend to everyone. From working within a team and overcoming artistic differences, to physically selling on a trade stall to the general public, you are able to fully immerse yourself into the world of start-up business and all aspects of it. From having little to no experience in such areas as finance, I think we can agree that everyone in our team now has a much more rounded understanding of what comes alongside with starting a company.

This year, our team comprised of; Grace Collen, Lara Wells, Freddie Steward, Charlie Leeming, Izzy Windle, Harry Cullens, Morgan Hardy, Rebecca Gaffney, Tom Bailon, Jake Aldridge and Cameron Smith formed the company 'Vario Co'. Derived from the latin for 'alternate', we wanted to be just that: have a product that made us stand out from our competition. With family connections within the group, it was decided that our product would be a glass tumbler which had the Norwich Skyline engraved along the rim. This would depict iconic sites such as Norwich Castle, The Forum, the UEA buildings and most importantly to us, Norwich Cathedral. Hand drawn by one of the team members, in creating such a product, we were not only able to celebrate the city, but also establish a link to our school.

We sourced the glass locally in North Norfolk, and began selling the product through word of mouth to parents and staff, before moving onto the larger community via such means as trade fairs. School events such as Jazz night and the School Ball gave us ample opportunities in which to publicise our idea, and indeed establish a support base, through which we could sell. Additionally, it was interesting to see the effect of social media, and indeed the almost necessity of it in order to maintain a profitable business.

The third week in April saw the county round of the Young Enterprise competition in which we, along with 9 other teams from Norfolk, were to compete against one another with the aim to progress to the regional rounds in June. The competition was judged on three main aspects of each business; presentation to the judges, trade stand, and interviews. We passed all three of these criteria and were submitted to the final six within the county stage of the competition. From here we were expected to repeat our presentation to a fuller audience, noting any comments the judges had passed onto us during the afternoon. Up against tough competition, we were glad to be awarded winners and progress through to the regional round of the competition. This was a fantastic result for the team who had put two terms worth of work into developing a business from scratch, and who'd had to fund everything themselves.

We now have a few weeks prior to regionals in which we can develop our plans and finalise our presentations. One major trade fair left is the 'Cromer Crab and Lobster festival', in which we hope to further our business and really move forward on the successes we have achieved thus far.