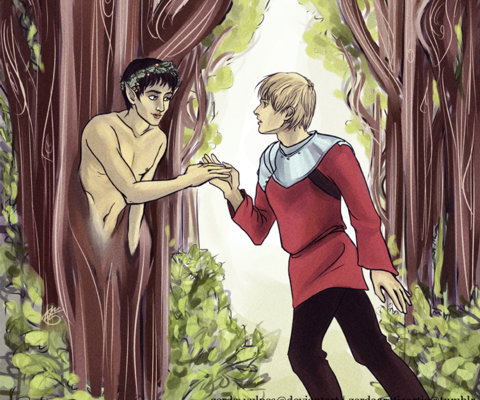 Platinum Independent Study: Ellie McKay in U6 tell us more about her project looking at the myths of Arthur and Merlin

Continuing our Platinum Independent Study series, Ellie McKay in U6 tells us about her project which looked at the myths of Arthur and Merlin and why they have persisted from the 9th century to today.

"My Independent Study looked at the myths of Arthur and Merlin and why they have persisted from the 9th century to today. The myths have become embedded in our culture, changing over time with different societies.

My interest in the myths started with a visit to Glastonbury, where I saw the supposed burial site of Arthur in the Abbey, and walked up the Tor, a tower surrounded by stories of magic, and supposed to be the door to the Celtic Underworld. Following this were visits to Tintagel, thought to be the birthplace of Arthur, and Stonehenge, a site linked to Merlin. Initially, I focused heavily on the argument that the myths persist for mainly commercial reasons, however, after I had started my research, I found this was too simplistic a reason.

Having a broad question allowed me to research the evolution of different arts, including film, literature, and paintings, the latter linking into my Art History A-level course. However, I was most interested in researching the psychology behind mythology, for example why we still believe in certain aspects of myths and not others, and how they appeal to different cultures. This research allowed me to come to the conclusion that mystery was the main factor for the persistence of the myth. We always want to solve a mystery, support our own theories, and disprove others, ensuring we are always looking for new evidence to understand the myths and how much of them are true, repeatedly keeping them alive.

Alongside commercialisation and mystery, other reasons the myths persist are chivalry and the need for figures we can look up to (which also linked to my Classical Civilisation A-level), religion, and the evolution of art, literature, and film.

Overall, I found my Independent Study enjoyable to research, write and present. Doing a Platinum level essay required me to speak to staff and pupils about my research. As someone who is usually not a confident public speaker I was worried, but my interest in the subject, as well as the supportive and friendly staff and pupils, ensured the presentation went well. I was also able to include photos that I had taken at Tintagel and Glastonbury, which made the presentation more personal and helped bring the story to life. As well as giving me the opportunity to build my confidence, the project allowed me to write essays to a university standard, which I will need going forward as I hope to study Ancient History next year. The need to be able to independently research a topic and include an extended bibliography are all key skills that I will need to use in the future. Finally, I used my Independent Study to strengthen my personal statement, as the topic of myths links to the Ancient History university degree I would like to take."