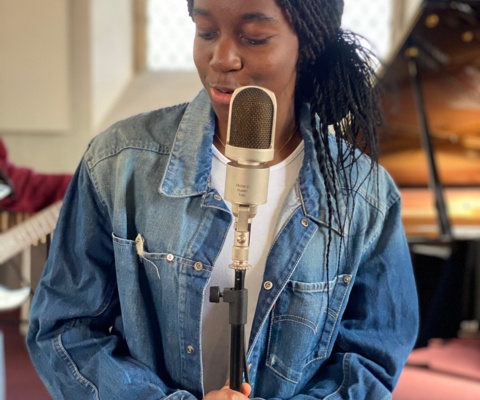 Platinum Independent Study: An exploration into the effect of race-relations of music - Alice-Lily Nnene in U6

Continuing with our blog series looking at some of the projects that pupils explored for the Platinum level Independent Study, Alice-Lily Nnene in U6 tells us more about her research: An exploration into the effect of race-relations of music.

"My independent study was titled, 'An exploration into the effect of race-relations of music'. The idea for the topic eventuated following research on Jorja Smith’s ‘Blue Lights’ (one of my three reference tracks). The story of 17 year old Smith writing so deeply about the experiences of those around her inspired me to think about how I could interpret similar situations and themes that involves racial prejudice. I set out to produce an EP (extended play) with this idea stringing the pieces together.

I decided to analyse 3 songs to help form my own creations: Blue Lights by Jorja Smith, Alright by Kendrick Lamar and Zombie by Fela Kuti. I chose the songs due to their contrasting styles and the slight differences in how they approached the subject matter. I found that the main similarities between the songs was the subtlety in which they all addressed the subject and how their melodies accurately reflected the topics presented; I sought to align my own songs with this.

Throughout my creations in my collection, I drew on multiple aspects of each reference track ranging from the R&B/Soul-ness of Smith's debut single to incorporating pidgin English, a la Fela Kuti, into an inherently hip-hop beat - a nod to Lamar. All three styles that each artist uses in their respective songs allowed me to experiment with a fusion of various genres and sounds. I was able to create sounds that were new for me; sounds that I liked.

Throughout the process, I made the transition from GarageBand to Logic Pro X – a more professional digital audio workstation (DAW). In making my songs, I was able to experiment with tools such as reverb and various mixing techniques. However, I faced several challenges when I was ready to complete the production of the final tracks. The songs that I had begun months in advance were stuck, sitting idle, on my faulty computer.  After having faced these technical difficulties due to my computer’s full storage, I learnt about a practical aspect of music production that had never occurred to me – saving work on an external device is essential to avoid stunted progress. Nonetheless, the process was beneficial and I was happy to produce a track in its entirety.

You can listen to Alice's track here: https://soundcloud.com/user-506310801/alice-lily-nnene-stand-up

Alice's own Soundcloud page can be found here: https://soundcloud.app.goo.gl/g6GxgQPhNzZQP2VY8