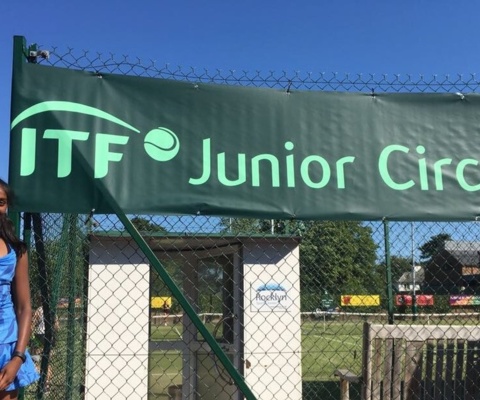 Ahead of the new school year, young tennis player Monica Raviraj has written about her experiences this summer which have taken her from Edinburgh to Harare, Zimbabwe. Having spent a full six weeks playing and training Monica can now count herself as the world number 1626, aged just 15:

I started my campaign to gain an International World Ranking the day the Trinity term finished. My first international summer tennis tournament was on 7th July in Edinburgh. I played well to get through the first 2 qualifying rounds, but in the 3rd round I wasn't able to beat a strong player, but still qualified as a 'Lucky Loser' into the main draw. In the first round, I played really well and won my match against a fellow top Brit. By winning that match and reaching the round of 16, I earned my first international ranking points! In the second, I struggled against a tough player and lost. Nevertheless, I was delighted to achieve my first World Ranking of 2027. This is a great starting point for my tennis career and receiving a ranking at the age of just 15 in the U18 category was a great achievement for me.

The following week, I travelled to Bournemouth to compete in another weeklong ITF tournament.  I played 3 rounds in the qualifying draw and won all 3 rounds to qualify for the Main Draw. But again I was drawn up against a strong player on the fourth day. I played a very good first set, but in the end I couldn't cross the line. However, I was still happy that I managed to give the top U16 British player a hard game. The third week of the summer holidays, I continued my travel to Belfast where I was prequalified for the main draw. As usual in the first round of the main draw, I competed against an older and stronger Italian player who was seeded number 4. However, this time I managed to reverse the result and I won my match in 3 sets. In the second round, I played against a difficult player from Ireland. I lost in 3 sets, but managed to qualify for the quarter-finals of the doubles. From this tournament, I gained ranking points from both singles and doubles which count towards my ranking!

Week 4 on July 29th, I travelled to Harare, Zimbabwe for 3 weeks of back to back tournaments. I was due to sign in and play a match on July 30th but due to flight delay, I missed my connection flight to Harare and was unable to sign in. Instead, I used that week for practice with my coach. The conditions were demanding, and that's where my fitness levels were key. There, it was a different altitude which really tested my cardio-vascular fitness. I guess all my hard work in the school gym with Mr Daalhuizen had finally started to pay off. Week 5 at Harare, I competed in the second tournament. I won all my qualifying round matches and was through to the Main draw.  I played against a player from India, unfortunately, it wasn't great day at the office for me and I lost the match. It was long and mentally challenging as my opponent was more used to those type of conditions and she was more consistent, and that's where I fell short.

Week 6 I was still in Harare and entered a Grade 3 tournament consisting of much stronger and older players. I played well in my first and second round matches, but in the 3rd round, I couldn't play to my strengths and lost my singles match! I was gutted as I knew I had a great chance of earning a lot of points which could've pushed me into the top 1000! I was devastated but I had to concentrate on what I could improve on in time to play doubles. I partnered with a player from India. I won my first round doubles match and progressed to the quarterfinals. Me and my partner took it as a challenge and played very well. In the end we lost in the third set tie breaker! It was a very close match, but on the bright side, I had earned points from the doubles category.

After a long 6 weeks of continuous summer tour, I returned home on Sunday the 20th August. I will have a few days rest and make time to catch up with school work before I return back.

I am very proud that I earned my first world ranking and at the moment I am world number 1626. I've got a tough year ahead with both academic and tennis to balance, but I look forward to catch up with my friends and also catch up with my fellow YNSA athletes and hear about all their successes.

17.05.22 Jemima Watson Reflects on A Season as Captain of the U17 Saracens Mavericks
Sport
22.04.22 Mr Grisewood on Playing for England's Touch Rugby Squad
Sport
23.02.22 Jasmine Sargeant (U4) on Achieving her Second Dan Black Belt in Karate
Sport