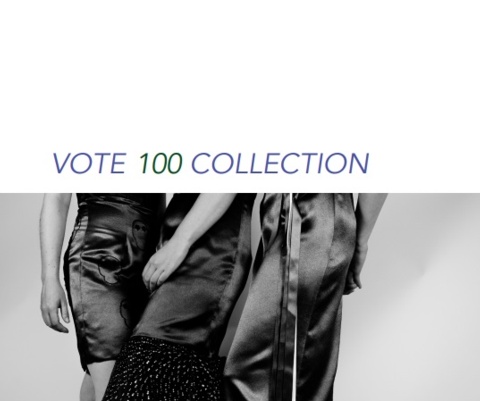 The following text was written by Pupil Maisie Cruickshank describing her Vote 100 Collection.

2018 marks 100 years since Parliament passed a law which allowed the first women to vote for the first time.  Women had been campaigning to get the vote for decades, but it was not until the Suffragists and, their more famous protagonists, the Suffragettes  were formed that they managed to finally achieve their goal on 6th Feb 1918.

The Suffragettes were incredibly courageous forward-thinking women who stood up for what they believed in, often laying their lives on the line in the process.  This year my friends and I turn 18 and because of the courage and tenacity of the Suffragettes, we are able to step inside the polling station to vote and have our say on the way our country is run.

My designs this year celebrate the achievements of the Suffragette movement and the 100th anniversary of women being given the vote.  Suffragettes typically wore their finest clothes so that they would be taken seriously when protesting.  In 1908, the Women’s Social and Political Union or WSPU, adopted the colour scheme of purple, white and green, that would not only distinguish them in their political movement, but would also prove to be a huge marketing success.

Emmeline Pethik-Lawrence, editor of the weekly newspaper, Votes for Women, wrote “Purple, as everyone knows is the royal colour, it stands for the royal blood that flows through the veins of every suffragette, the instinct of freedom and dignity…white stands for purity in private and public life…green is the colour of hope and the emblem of spring.”

My collection incorporates a range of evening wear in the Suffragette colours along with a Suffragette-inspired slogan t-shirt collection.  Fashion designers Vivienne Westwood and Katherine Hamnett saw the potential of the t-shirt as a platform for conveying political messages back in the 1980s.  Thirty years on and the t-shirt is still a highly effective form of democratic self-expression.  Fashion, even in its simplest form, is all about making statements of one form or another, and that means that it will always have a role to play in highlighting issues of injustice – it is a constant ally in troubled times and a way of designers to help the masses share their views and beliefs. 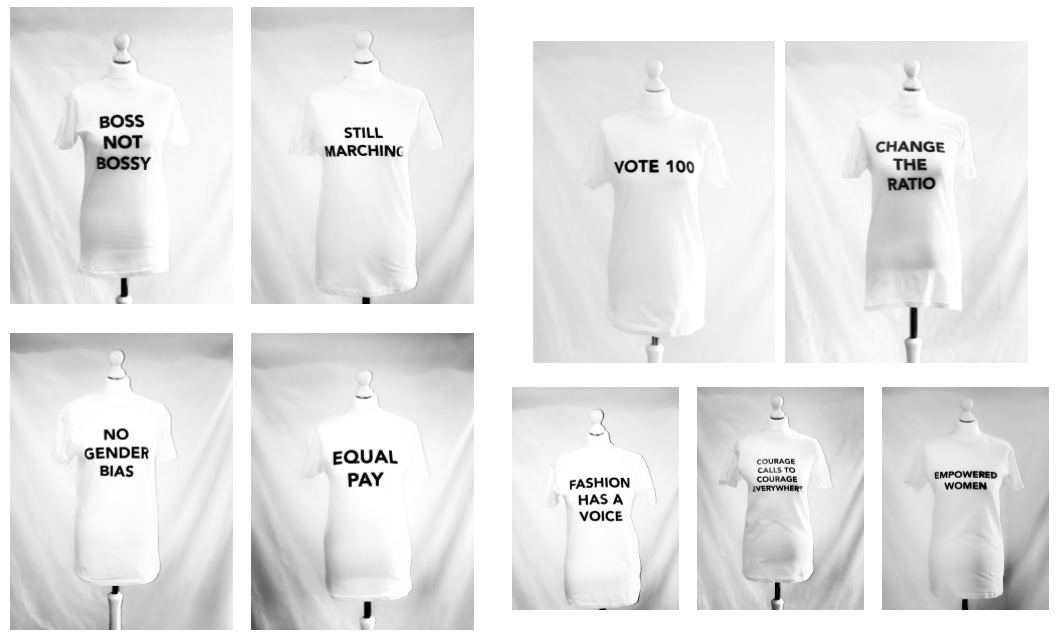 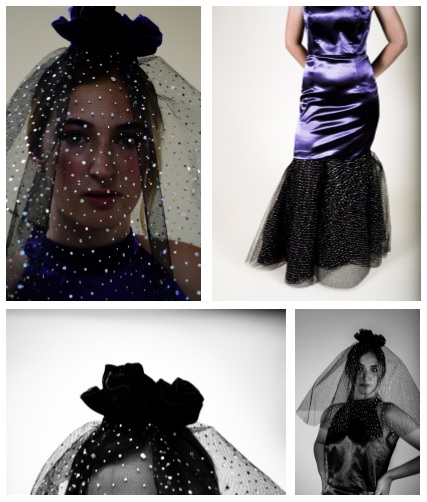 The black net face veil finishes off the look.

Emmeline Pankhurst was the leader of the British suffrage movement. In 1903 she founded the

In 1999 Time magazine named Pankhurst as one of the 100 Most Important People of the 20th Century, stating “she shaped an idea of women for our time; she shook society into a new pattern from which there could be no going back”. 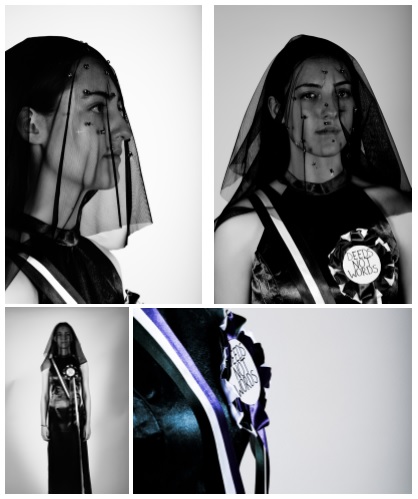 First seen at Women’s Sunday held on 21st June 1908, the sash soon became an essential part of the “Suffragette uniform”. Such a sash was worn at demonstrations, processions and public events.

A sheer black face veil is with detailed with individual black and “blood red” crystals hand-sewn on to the fabric.  The “blood red” crystals symbolise the tragic death of the Suffragette Emily Wilding Davison who was hit by King George V’s horse, Anmer, at the Epson Derby when she walked on to the track during the race. 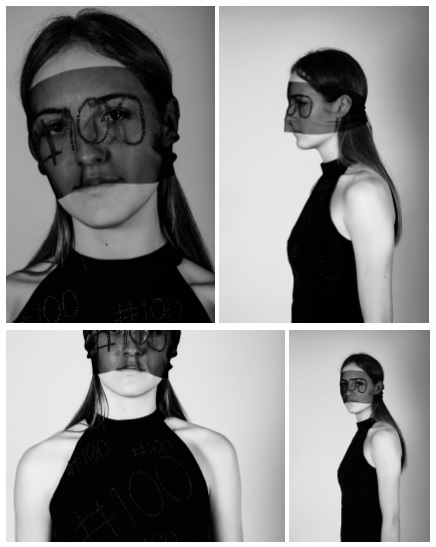 The floor length skirt has exactly 100 iridescent purple beads individually hand-sewn to celebrate 100 years of women being given the vote in the UK.

My logo design was inspired by suffragette Sylvia Pankhurst who applied her artistic talents on behalf of the WSPU devising its logo and various leaflets, banners and posters as well as the decoration of itsmeeting halls. 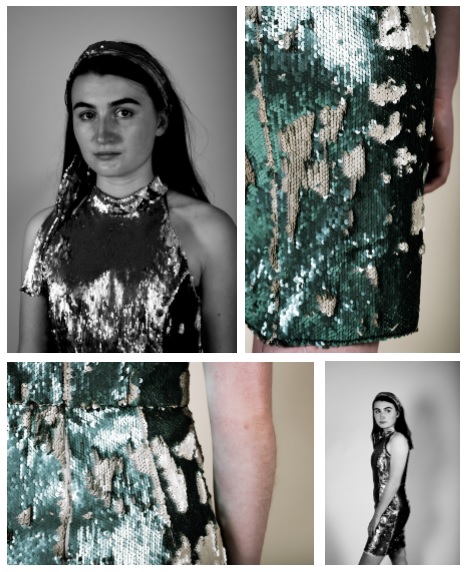 I chose this material to illustrate the changing times for women in the last 100 years.

Leonora Cohen was a member of the Leeds WSPU and a personal bodyguard to Mrs Pankhurst. In the 1920s, she was appointed OBE for services to public life. She lived to the age of 105, being hailed in the 1970’s as a hero during the second wave of feminism 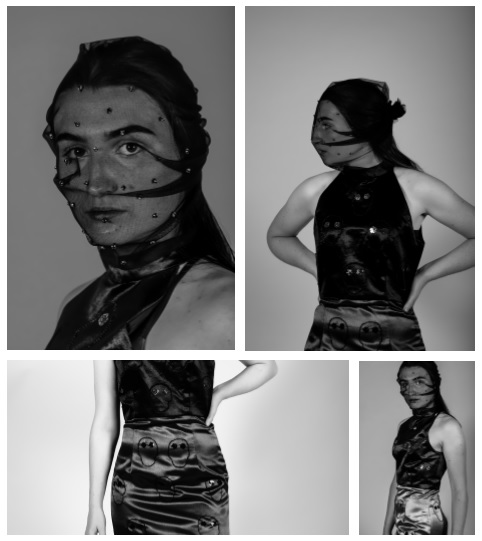 The skulls have no mouths which portrays women’s lack of voice before the vote.

The veil represents the ‘virtual gag’ on women’s voices.

Lydia Becker was a leader in the early British suffrage movement, as well as an amateur scientist with interests in biology and astronomy. She founded and publishes the Women’s Suffrage Journal 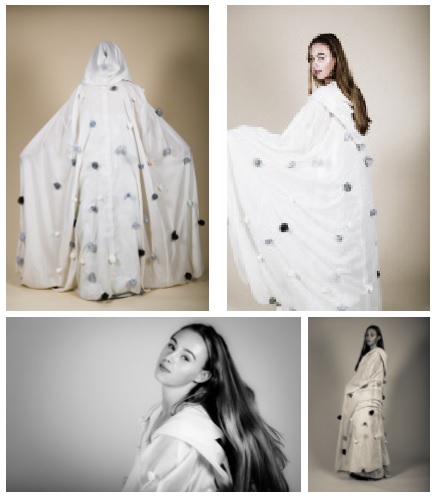 Floor-length, strapless muslin gown with hand drawn and painted floral design with the colours of the Suffragette movement.

One of the intentions of the colours was to promote public awareness of the depth of the belief for suffrage in England.  Women were encouraged to “wear the colours” to show support for the movement and to stand out in the crowds during public demonstrations.  They particularly wanted the men that were opposed to the movement, to be aware of the connection of the colours to the suffrage, in this they succeeded.  The characters on many anti-suffrage postcards, drawn by male artists of that period, were often draped in sashes and banners of purple, white and green, presuming that a suffragette would be recognised by her colours, even by the opposition of the movement.