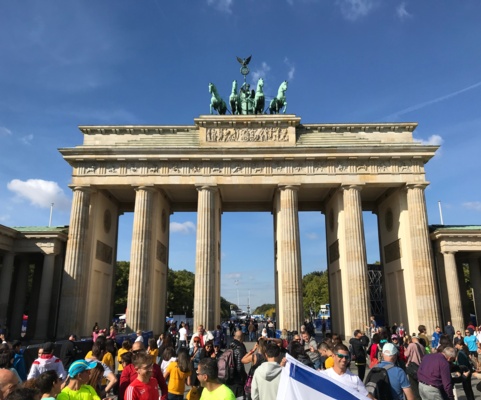 You may recall the Alzheimer’s Cup Cake Day and Dementia Friend training back in June and you may be wondering how we all got on in Berlin? Well if this is the case, read on – in our joint blog below, each of us gives our own account of the big day!

Berlin is done - we had an amazing day and all of us (including Mr White who struggled with a calf injury during training) finished well. Sophie and Sam Todd’s Dad also here with us and ran amazingly (having suffered with dodgy Achilles and been seen with crutches only weeks before the race) too! Stephen pleased with his 4:37 - great effort as he’s never run that far before and I’m simply thrilled with achieving my aim of sub 3:45 - I ran in 3:44:32! It was enough to allow me to submit for Boston qualifying even if not necessarily fast enough to get in this time (it works that the fastest finishers ahead of 3:45 get in first until spaces are full). As I crossed the finish line, just beyond the Brandenburg Gate, it became clear to me that regardless of what was to come next, Tokyo or Boston, I was just so thrilled to have achieved what I had come to Berlin to do – to get my 4th (major marathon) star (having already completed London, New York and Chicago) whilst raising such an amazing amount of money at the same time.  Only 2 stars to go, would you believe that only 91 people collected their 6th star in Berlin this time? I can’t wait to join such a special, exclusive club – only around 4000 runners have completed all 6 so far!

For me, running a marathon is so much more than just the race itself; I thrive on the planning and preparation that goes into the event and enjoy every minute of the arduous 20+ week training. So ‘what’s next?’ I hear you ask. For me, the 20 week long roller coaster ride starts again almost immediately, as pretty much on returning home from Berlin, I was to discover that I was one of the lucky 37,000 successful applicants (of 330,271) to get in to the Tokyo marathon for 2019 – so in March I’ll be doing it all again, but this time for my 5th star and raising money for Parkinson’s (and hopefully on the road to my final stop, Boston) – watch this space! 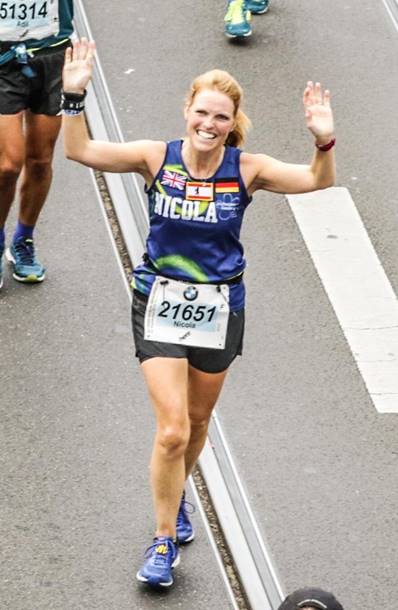 When cities host marathon’s they use it as an opportunity to showcase themselves to the world. Berlin was no exception, the course weaving it’s way around the impressive array of historic buildings and monuments, interspersed with contemporary modern architecture.  Having gone against all sensible advice and walked several miles around the tourist sites on the Saturday, thankfully my legs were fresh on the Sunday morning. Conditions were perfect, bright blue skies, warm with a gentle breeze. Conditions were so good in fact that the marathon world record was broken by Eliud Kipchoge, in a time of 2:01:39. I thoroughly enjoyed the whole run and came in an hour and 52 minutes behind him. Approaching the finish area, running through the iconic Brandenburg Gate will be a memory forever. 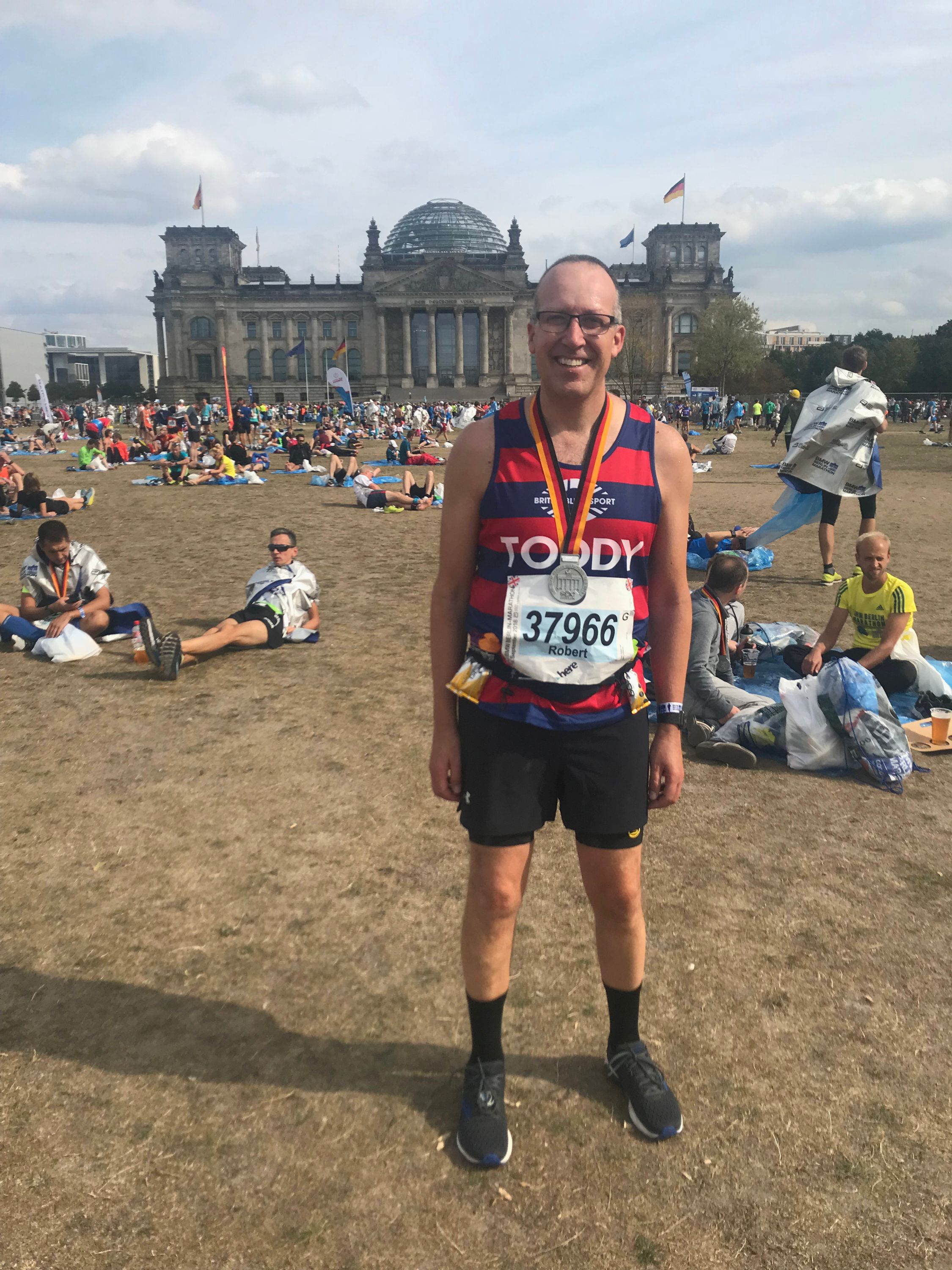 What an epic weekend – I loved it!! Huge congrats to my race buddies Nicola, Stephen and Robert and a massive thank you to the awesome support crew for their goose bump inducing support. Also want to say a big thank you from all of us for those of you who contributed to our fundraising. 15 years after I last ran the London marathon, the time had come to have another crack. Precious weeks prep was marred by a weaver fish sting, a calf strain and a near fatal bout of summer man flu; hence this was the slowest of my 4 marathons but the most rewarding, given the lack of training. 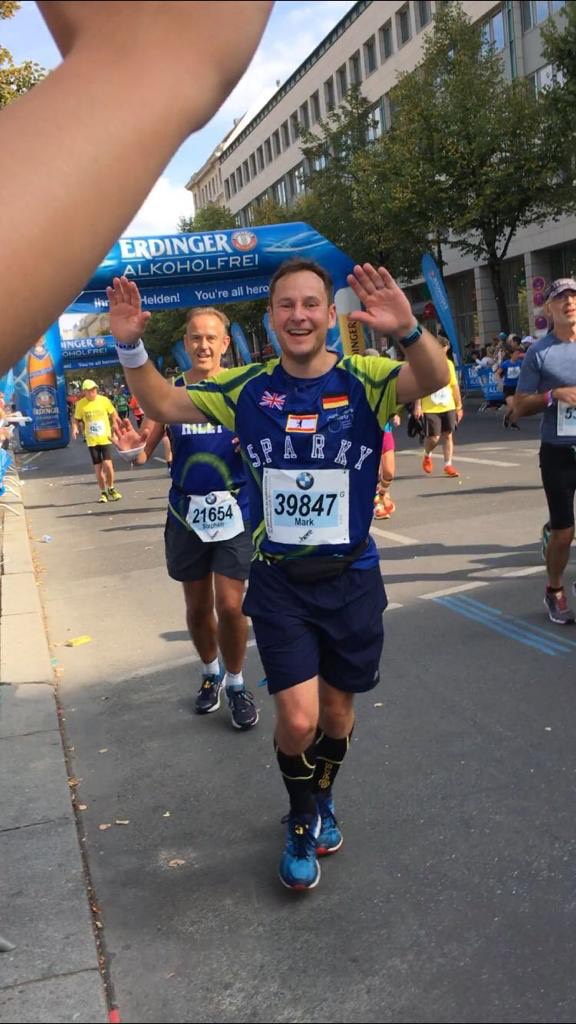 I’m sure I’m not the only person to have said I’d never do a marathon, and then get persuaded it’ll be a good idea!  I bagged a charity place for Alzheimer’s (and had some amazing sponsorship support from friends, colleagues and family), with the added incentive that the race fell 50 days before my 50th birthday, so an opportunity to take on a mid-life crisis challenge. It was great to do the last 5k with Mark and to run over the line together. I was delighted with my 4:37, well managed and steady, Mrs Hill with her 3:44, and exciting to be on the course as the World Record was broken. I read that it was ideal marathon conditions for a new record, and I’m sure it was between 9am-11am; but I can also report that between 10am-2:30pm (when I ran) it was plenty hot enough! I’d supported my wife at other ‘majors’ before, and as she prepped for her 4th, I stuck religiously to a solid 16 week plan, with a longest run, driven more by time than distance, of 20miles, with a sensible taper and the Wissey half-marathon two weeks beforehand.  I was really lucky; I incorporated post run stretching for EVERY run I did, and came to the big day as prepared as I could have possibly been.

I received great words of wisdom; hydration, fuel, transport yourself to 30k and stay strong, run like a Jedi (feel the run), repeat ‘I am an athlete’ etc., and I’m positive all that helped. I was realistic, and I wanted to enjoy the day. Berlin was great fun; stressful as you’d expect with 50,000 entrants, queueing at every turn in the build-up, but all expected. The support along the route was good (not as good as New York), and the route itself a bit overcrowded. It was great to see so many Alzheimer’s runners, and as a charity their support was excellent in the lead up. My reflections are that I’m buzzing I did it, an amazing experience, the last hour was brutal, and the reward of that lovely medal well deserved. Respect to anyone who takes on the challenge. One final thought, which kept me going, was the fear of hitting the mythical ‘marathon wall’ around 18-20 miles, but now, I can confirm, there isn’t a Berlin Wall!! (but you already knew that...) 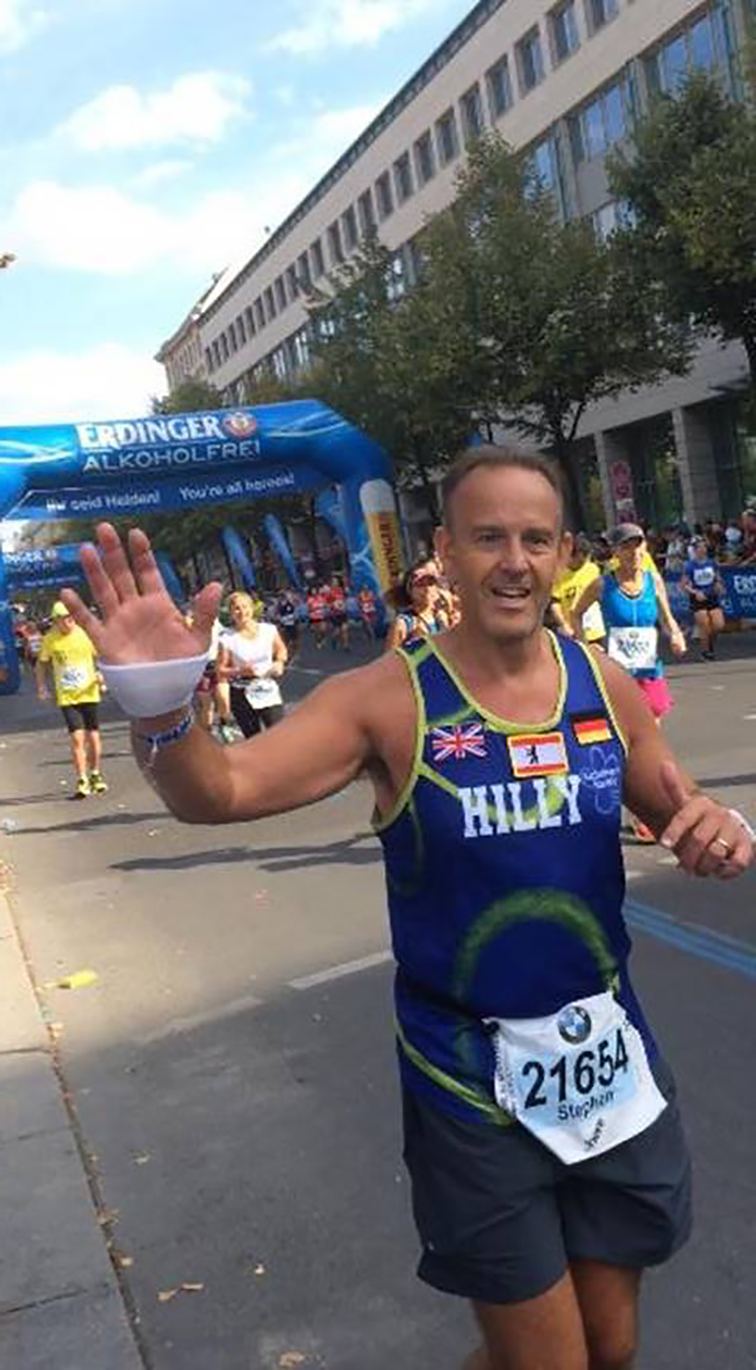