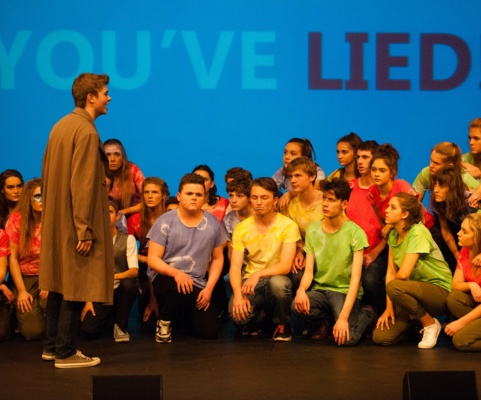 By Alice Rickett, Assistant Director and Norwich School ON

There are many, many amazing things about being involved in the production of a Norwich School Musical. What never failed to impress me about the rehearsal process is that how, every evening after a demanding day at school, the principles were never half-hearted and were totally committed to everything we asked of them. In such an emotionally challenging production as ours, this was no mean feat. Even when Mr Allain would tell them to 'save their chops', Josh Clark (U6B, Judas) and Rob Ekbery (Jesus, L6E) would never compromise on their acting - and the company were always there to sing every solo line as well as their own.

Attending every rehearsal and every performance never trivialised these incredible performances. Indeed, recalling Millie Louks (U6N, Mary Magdalene) singing I Don't Know How To Love Him in her uniform at the end of a long day and busy rehearsal in BS2 with incredible conviction and truth was a privilege. Rob built on every previous performance of Gethsemane and still managed to make it seem as though he was thinking it for the first time - every time I remembered when he first sang it in rehearsal and outside the younger boys playing football in the playground after school all stopped to listen.

While this meant that I might have been the only one on edge knowing how tricky it was for Seb Johnson (U6V) as Caiaphas to find his pocket amongst his priestly robes or to fit his enormous ring into said pocket to pull the money out on time to give to Judas, I was also incredibly privileged to be able to pre-empt and watch out for the smallest of special moments. Hopefully it wasn't missed by many but one exchange between Judas and Peter (Morgan Corby, L6C) during The Last Supper was incredibly poignant, and Angus Tom's performance as a young John never diminished, and was scene stealing in the arrest and the 39 lashes. All of these moments are worth the nervous wait to see if those who struggled with the dance get it right on the night, or remember the timing of their entrance...

The commitment of the company in such a demanding staging was also admirable. Their unwavering performances conveyed how dangerous their characters' blind devotion to Jesus was. Their threatening power was seen from the overture, through Hosanna and turned quickly into aggressive self-mindedness in The Temple. The reprise of Hosanna when Jesus is on trial was a true highlight for the company who all performed the mob's scorn perfectly.

What brought the whole production together, as well as the company, was Finlay Hanlon's (L6E) projections. The work he did to weave connections throughout the performance with repeated images was genius, and his opening and closing videos contextualised the production perfectly.

Supporting performances came from the wonderful character-actors of Rory Bartram (L6C) as Annas, Jonny Hewitt (U6E) as Herod and Ben Nnene (U6R) as Pilate. Indeed Ben's performance of Pilate's Dream was a true highlight of the show, as was Saskia Walsh's (U6N) bold, confident turn as Simon(e) making audiences wonder why the part wasn't written for a woman. The joy of performing was evident in all, especially Josh in Superstar. The whole company, crew and band must be congratulated for such an accomplished production.