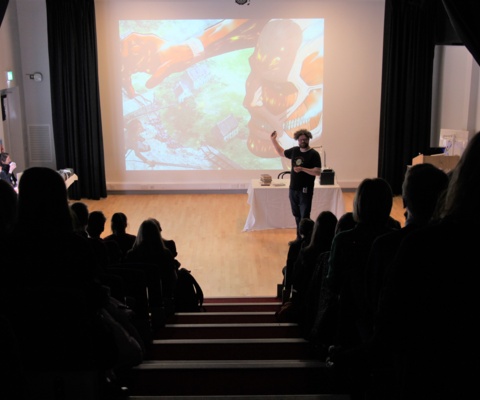 Norwich School hosted a Book Day on Tuesday 10th March – our second this year. In the morning over a hundred pupils in Years 9 and 10 from eight different Norfolk schools came and listened to three very different speakers.

Sufiya Ahmed, author of Secrets of the Henna girl, spoke about her upbringing, her experiences working in the House of Commons, and her journey to being a published children’s writer. Whilst working in politics, she spent time with Asian women who were campaigning to make forced marriage illegal in the UK, and this became the theme of her fascinating and informative book.

Pam Smy works as an illustrator for many other authors and has also published her own book Thornhill, a beautiful and atmospheric ghost story told in both words and images. She discussed her creative process, including many images from her extensive sketchbooks, and all of the pupils drew along with her, using their imagination to create their own scary images.

Alexander Gordon Smith, author of the Escape from Furnace series was the last speaker on the bill, and as well as talking about his writing process he told tales from his own childhood growing up in Norwich, where he still lives. He discussed the role of horror and how it helps us to learn more about the world by questioning our surroundings. He managed to not scare the pupils too much on this occasion, but did bring along the life-size severed head of one of his zombie characters!

Jarrolds books were in attendance and pupils enjoyed buying books, having them signed, and of course, getting selfie with the authors.

In the afternoon the authors all repeated their efforts for our own Lower Five year group who participated enthusiastically with role play and dancing, drawing scary doll pictures, and asking challenging questions of their guest speakers.

Our next Book Day is due to be held on 26 June.

Some comments from visiting pupils:

“I was so inspired by all the speakers, it was such a great experience”