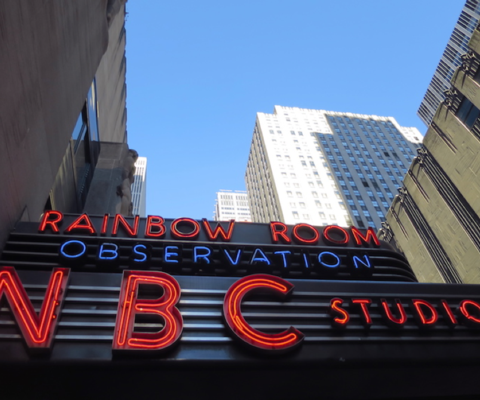 Mr Murray, Miss Mcdonald-Bell, Molly Carroll (U5N) and Laurence Herring (U5S) write below on their adventures of New York City, a trip taken with Norwich School during the October half term 2018.

To Heathrow for our flight to Newark airport. The flight was 1 hour 30 minutes earlier than billed so the usual format of hours spent waiting to be called to our departure gate was replaced by frantic booking in and a pell mell rush to an already full plane. By the time we landed at Newark (a three-film flight), we were ready for bed. Odd to be so spent at 7.30 in the evening until a more worldly-wise member of our party pointed out that it was actually 2 in the morning and that this phenomenon was known as jet lag.

The first day began with a trip to NBC studios and our first introduction to the heights that can be scaled by the U.S. service industry: our guides (bizarrely self-described as pages) were two of the happiest and most efficient human beings I’ve ever encountered and their delight was almost entirely adduced to the corporation that employed them. The tour was fascinating, and “the talent” (Jimmy Fallon & co) treated like Gods: “the corridor your standing in is the one that Jimmy Fallon travels down every evening to reach the studio” a characteristic line. 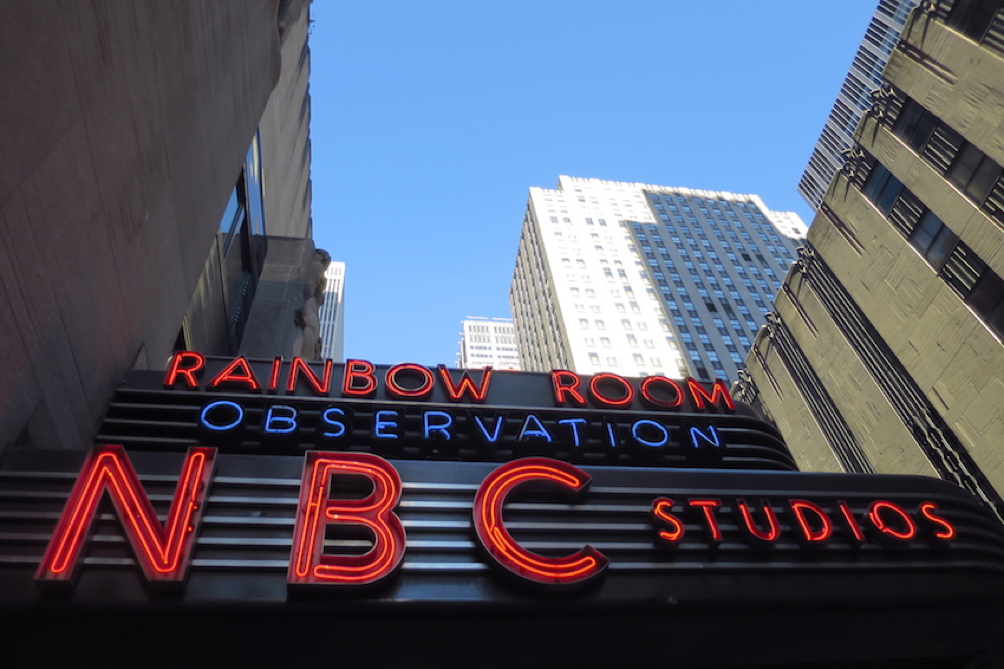 MOMA was a delight and a revelation, with every room containing new wonders, from Monet’s water lilies, to Italian futurists, to a room full of Matisse paintings that made you swear you’d been transplanted to the Mediterranean. Even the visiting exhibitions - for example, the one on Yugoslavian Modernist architecture (“sounds a bit niche” was Miss Mounter’s apt comment) - were both fascinating and heartbreaking- Tito’s vision for his patched together nation based on his brilliant stratagem of a secular country that nonetheless catered for the needs of its many creeds and nations. An ideal that foundered on the fact that we love huddling together in like-minded gangs.

The day concluded with the film ‘First Man’ which I think it’s fair to say divided opinion: many took the opportunity to grab 40 winks while others thought it a brilliant study in how PTSD can simultaneously crush and inspire.

Our first destination this morning was the Guggenheim Museum. The consensus amongst the party was that the art was dwarfed by Frank Lloyd Wright’s extraordinary spiral building, a beautiful geometric exercise that made the head spin, but in a good way.

On afterwards to either the Cooper-Hewett National Design Museum - a wonderfully interactive experience for the designers, providing a whole range of stimuli for individual projects - or the Metropolitan Museum of Art, which provided a cornucopia of art for the rest of us from Etruscan sculpture to the society portraits of Singer Sargent.

The day concluded with a visit to the thoroughly bizarre Spyscape where we discovered our fitness for a career in espionage. The result, unsurprisingly, was that Joe Rowlinson was more suited to a career as a spook than Mr Murray.

A brief visit to Times Square for some retail therapy brought the frenetic day to a close.

There’s a lot of walking scheduled for today, with a 3-mile hike Downtown planned. The Museum of Moving Image and the WTC memorial are at the end of our journey. (The effect of the latter was properly devastating 4 years ago on my first visit to the city.)

An amazing walk Downtown, past Stieglitz’s Flatiron Building, with an extraordinary vista behind us with the Manhattan high rises framing the view of the Empire State Building beyond. When we arrived at the International Centre for Photography, we were confronted (the verb is exact) by Eugene Richards’ photographs in ‘The Run-On of Time’. The atmosphere engendered by the pictures such that it felt like we were in church. Richards’ vision utterly compelling - the fact that I’d never heard of him mitigated by the fact that none of our experts had heard of him either. Breathtaking stuff.

...and so to the 9.11 Memorial and Museum, the two poles apart in their effects: the first is notably lacking in consolation, the recent tendency to plant mini-stars-and-stripes amidst the names a regrettable innovation. When the loss involves so many nations, it is odd to plant a flag. The museum, sadly, does nothing but “plant the flag”, the latest exhibition chronicling how American sports reacted to the tragedy. How American bee-keepers reacted opens next month, presumably. The gigantic omission in the museum is the lack of context, the event appearing as if by magic out of the sunny skies that day: to memorialise is also to forget (as Niall Ferguson pointed out in his atomisation of Remembrance Day). Still, I think that once a month the museum should be closed and Khalid Sheikh Mohammed the “onlie begetter” of the “Planes Operation” - and still alive, languishing in a high security jail in Guantanamo - should be released from prison to be frog-marched around the museum, the powers-that-be ensuring in particular that he spend time in the room where the voices of the loved ones of the deceased echo through the foundations of the building, telling us of their subsequent pain and anguish. It is interesting to note how tight security is at the museum’s entrance, scanners check everyone carefully, belts are removed, in a display that can only be intended to illustrate the adage of bolting the stable door. There is, of course, a gift shop.

Thence to the Lincoln Centre where astonishingly well-informed guides showed us around the complex. The revelation of the set on the stage of the Metropolitan Opera a highlight, a wooden cabin in the forest suddenly appearing before us as if by magic.

‘Kinky Boots’ is the evening show, attended after the fun and games of Ellen’s Stardust Diner, an eaterie specialising in waiters and waitresses who sing while they wait tables. Mr Passam’s dance moves a standout as he accompanied the waitress in her rendition of ‘Rock with Me’. A billboard moment for everyone present.

‘Kinky Boots’ divided opinion. Some regarded it “An incredibly uplifting experience after a long and tiring day” (Ellie McKay); others were less impressed: “I’m not saying it was bad though the ‘English’ accents were atrocious and where was the character development? Hash tag: paper thin.” (Molly Carroll)

To a session with a member of the cast of ‘Kinky Boots’. After the funny, forthright, witty lady concerned had broken down our English, middle-class reluctance to seem “pushy”, the conversation zipped along, the hour passing swiftly as she addressed matters as various as the pension arrangements made for those working on Broadway to how she kept her performances fresh after 2,000 renditions of the same show.

The Museum of the Moving Image in Queens was next, providing insights into the cinema industry both during the filming process and post-production. Many of the exhibits were interactive and much fun was had interacting with them. A particular highlight for me was watching Etienne Pell dub dialogue onto ‘School of Rock’ - Jack Black has never sounded so pukka - and the irrepressible Mr Passam channeling the spirit of Judy Garland in a scene from ‘The Wizard of Oz’. (If this sounds unlikely, photographic evidence exists that this did indeed take place!)

A day besieged by student sickness and pipe bombs concluded with some retail therapy. And so - for the last time in NYC - to bed.

Our guide (page, get it right, wiseguy!) at Madison Square Garden a New York character, his shtick largely lost on a group several members of whom thought we were visiting a garden (!). Lots of references to Monty Don and Charley Dimmock preceded our arrival; there were plenty of looks of incomprehension as our guide referred us to the Knicks, the Rangers and ‘The Fight of the Century’. The vast auditorium echoed to the sound of the college basketball press conference - America’s obsession with college sports remaining a mystery despite our earwigging.

A final whizz round Times Square or the New York Public Library - depending on taste - brought our breathless, frenetic visit to this gigantic, vibrant, mind-bogglingly diverse city to an end.